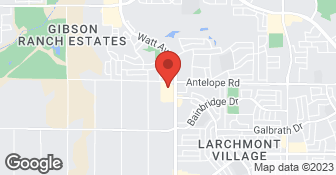 You've come to the right place for the solutions to all of your home or business needs!! Renovation Remodeling Repair We are known for meeting the needs and desires of our customers and exceeding their expectations by providing them with creative design solutions, quality craftsmanship, excellent customer service with attention to detail, and doing it all with the highest level of integrity and honesty. Our constant communication, attention to detail, and concern for our customer's satisfaction has given us the pleasure of serving thousands of customers over and over again. We are confident you'll be happy with our services and that you'll become part of our ever growing group of loyal customers. Let us prove ourselves to you by calling us today

When we called them to schedule the job, we told them again that the ceilings are 18' so they could bring the right equipment. Then they said they needed two people to do the job, so it would be counted as 2 hours, but that should be enough time. We made sure to fully pre-assemble the fixtures ahead to help the process. A week later, they came out the first time. Two of them came in and immediately said they didn't have a tall enough ladder. Second time they came out, they: 1. Didn't bring the right equipment - the ladder wasn't near tall enough. 12' ladder and anybody knows you can't stand at the top of a ladder, plus it's an A-frame so will not be 12' when spread out. They thought it would be okay with 12' ladder and a 6 foot handyman! Talk about incompetence! 2.They tried to insinuate the ceilings were 20 - 22'. Guess they never thought to measure. We did again after and sure enough we were right on. 3. The 2nd person that came out was the office staff - "Gina" - who freely admitted to not knowing how to do anything. End result, they couldn't do the light fixture for the center of the room without the proper equipment. The did manage to get 2 fixtures hung (with extension ladder and one above the stairs with shorter ladder) but it took 2 people 1 1'/2 hours because they sent Gina up the ladder for the second one. Then they said they wouldn't hang the third fixture unless we rented scaffolding (a taller ladder was not sufficient - go figure!) and then as "favor" Jason would come out and hang the fixture. They insinuated it should be a favor because they should have charged us for the first time they came out, plus travel time! Bottom line, we told them to forget their "favor" and counted ourselves as lucky to (hopefully) have escaped any serious damage to our home from such incompetence.

Description of Work
We needed three simple replacement light fixtures hung. We called California Handyman before buying a Groupon and said the ceilings are 18' high (it's one of those front rooms with balcony overlooking the room). We could replace the fixtures ourselves, but we don't have the ladder. We were assured over the phone that they could do the job and 4 hours would be more than enough time.

California handyman repair service is currently rated 1 overall out of 5.

No, California handyman repair service does not offer a senior discount.

No, California handyman repair service does not offer warranties.

Are there any services California handyman repair service does not offer?