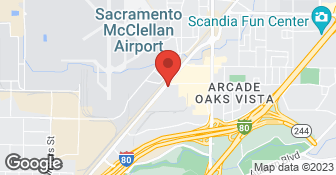 The gentleman that came to the home to pick up the Luminette was very professional and took great care in gathering the covering for transport to their facility. He also returned and installed the window covering on the same day. The only disappointment was that the one piece that held the upper corner onto the bracket as the blinds is open and closed hasn't stayed on. After it was returned and installed that piece was still broken, continuing to come off when the blind is opened.

Installation went very smoothly and we were happy with the look and function of the blinds. However, the vertical blinds would not "relax" and hang straight when drawn fully across the glass door. We were talked through how to correct it ourselves (we live 1.25 hours from their location), but when that didn't work the technician was sent up to fix it. Turns out, the problem originated in the manufacturing , but it was fixed and we are very happy with our blinds. We will definitely use Blind Magic again for other windows.

Took longer than they claimed. Did not call to inform shades would not be back. Tore 5 shades in cleaning process. Did repair a couple. A couple were not repaired but did not tell me until they were reinstalled, even though I asked them if they were all repaired over phone.

Description of Work
Blind Magic repaired a vertical blind that we brought in after we removed the slats. The slats are cut to fit a window with the top slanted diagonally. After the experience with the repair, we had them clean the slats, which are fabric. Both jobs were done in a timely manner at a reasonable price. I would use them again. They were very convenient for us and they have Saturday hours. Good business.

The owner came out to measure our doors. She was very helpful and worked hard to give us the best price. She also showed us that we could use two different brands in order to save a bit of money. When the men came out to install the treatments, they quickly discovered that the ones for the family room had not been cut correctly so they had to re-order them. They did not install the bedroom ones as they would have to return anyhow. When they returned (a couple of weeks later ), they installed both sets of window treatments, but didn't have the caps for the end of the valance. They showed up a week later at our door with the caps, but they didn't fit. So we are still waiting for the correct end caps.

Description of Work
They measured and installed window treatments for two sliding glass doors - one in the family room and one in the bedroom. We chose the vertiglide. The door in the family room also has a large dog door in it so they designed the slider to go from left to right, and right to left, and to meet in the middle.

When I took the blinds into the shop, I was told that it wasn't the strings, but the clips at the top. There were two clips that were broken, and it would take 3-5 days to repair. Three days pass, and I hadn't heard anything from the company, but the weekend was coming, so I didn't think much of it. Finally, approximately, the sixth day, I received a call and was told that there were more than two clips that were broken. She told me the additional costs, and asked if I wanted the work done. I had no choice, so I agreed. I was told at the time that he was working on them as we were speaking. I waited another two days, and hadn't heard from them, so I called and was told the blinds were ready. She said she had called and left a message. My answering machine is on all the time, I never turn it off, but I did not receive a call. I thought it took this complany a long time to do the work. I use to take my blinds to another company, and sometimes they would complete the work while I waited. Also, I don't like being quoted one price, and later told another. The front person should be trained in giving estimates, and if she doesn't know, call someone who does. I guess the price was fair, and if I was told the total up front, I might feel differently. I don't know if I will use this company again. It is close to my house and convenient.

Description of Work
Repair the strings on 2 separate blinds.

We found this company on Angie's List and requested an estimate for cleaning of our Hunter Douglas Blinds. Over the phone we were quoted a price based upon size of each blind. We said that we needed 4 blinds cleaned, and the secretary arranged for the owner to come out and view the blinds and provide the written quote. She stated they could do the service on a specified date the following week. The owner called about 40 minutes after he was supposed to arrive and said he was lost. When he finally arrived, he took one look at our house and the blinds, and stated a price that was 30% higher than we had been told by phone. When I questioned this, he asked who had given that price, and said he had someone answering the phone that was in training. That was the entire explanation, no honoring of the original price, and no promise to educate her on the price structure. I had a feeling that he had raised the prices after looking at our (large) home. While he was at the house, we had him look at 3 other blinds to see if they could be cleaned and what he would charge. He said he would have to go back to the office and check on the cleaning technique and get back to us. The following day we received a written estimate that was about double that which we were originally quoted. We weren't feeling comfortable at the honesty of this company by that point, but couldn't readily find another company to do the job. We then suggested they just clean 4 blinds, the original number we had asked for in the estimate, and to have the cleaning done on the date we had been told it would be done. We received a reply that a) they would no longer clean only 4 blinds, but that we had to agree to the larger order of all 7 that he had looked at or the order would be too small, and b) the date for cleaning wasn't available now -- we would have to wait another week. The story just kept changing and getting worse. There was no attempt to honor any of their verbal promises. The price nearly doubled from the initial conversation. Finally I contacted Hunter Douglas and was referred to 2 agencies, both of which came out to give estimates. Both of the other companies were friendly, followed through with their word, and either would be suitable for the job. They were: Sullivan Installation, and Sierra Home and Commercial Services. We hired Sierra to do the work.

Although the precise color of my current blinds was no longer available, they created a color and fabric so similar that you cannot tell the difference. The only problem was that the length of the blinds was about 1/8th inch too short. It's not noticeable unless you do a side-by-side comparison. I'm not sure if the blinds we gave them were also a bit short, or if their measurement was a bit off.

Description of Work
I needed to replace a couple of vertical blinds that had broken. I took the broken blinds to Blind Magic and they provided replacements.

They took down 9 blinds and took them to their site to clean. They returned later on in the afternoon and rehung the blinds. We use them twice a year: once in the spring, and once in the fall. Our blinds always come back looking brand new. We appreciate the service they provide and highly recommend them.

BLIND MAGIC WAS FRIENDLY AND ARRIVED ON TIME. I WAS IMPRESSED WITH THE WORK PERFORMED FROM START TO FINISH. THE LEVELORS WERE CLEANED, REHUNG AND THERE WASN'T ONE BIT OF TROUBLE OR MISHAP.

Description of Work
BLIND MAGIC CAME INTO OUR HOME AND REMOVED THE LEVELORS IN ALL OF OUR ROOMS WHICH WOULD BE 11 WINDOWS AT $10.00 A PIECE. THE LEVELORS WERE CLEANED ON SITE AND REHUNG.

Jetstream Power Wash is a full service exterior cleaning pressure washing company operating out of Corona, CA. We are the leading provider of exterior cleaning services for all residential, commercial and industrial properties throughout the Inland Empire, Orange County and the surrounding areas. We are a step above the rest in the mobile hot-water pressure washing industry with state of the art equipment that provides professional results every time. We can provide one time, bi-weekly and monthly services to keep your property looking it's best. Jetstream is a locally owned and operated, fully licensed & insured family business.  …

Sparkle & Shine Professional Cleaning LLC has over 20 years experience cleaning residential homes as well as commercial offices and kitchens. As an owner operated business we take great pride in our work and are hands on with each and every customer. We support preserving our environment and offer eco friendly services as well.  …

Sierra Vista Maintenance is a family-owned and operated business that specializes in customer service, attention to detail, and the highest quality of work. We stand behind our work 100%. As an experienced cleaning service, customer satisfaction is our top priority. Our trained and professional staff will perform the highest quality work at an affordable cost. All power washing is performed by highly trained and efficient staff. All roof, gutter, and downspout cleaning will be performed with the highest level of safety and precision. Our staff will provide before and after pictures of every cleaning. Our window cleaning professionals are courteous, prompt, and streak-free, wearing shoe covers and using drop cloths as they leave your windows sparkling. We have worked hard to be very highly rated by our customers and we highly value our customers. Our power washing services include an exterior home wash, patios, driveways, walkways, lawn furniture, gazebos, and much more. Our window washing services include both interior and exterior, vacuuming and cleaning tracks, wiping down frames, and washing screens. We also clean skylights and solar panels. Our gutter cleaning services include removing loose debris from the roof, cleaning gutters, clearing downspouts, and cleaning up any mess that we make. We service El Dorado Hills Ca, Folsom Ca, and the Sacramento area.  …

How is BLIND MAGIC overall rated?

BLIND MAGIC is currently rated 4.4 overall out of 5.

What days are BLIND MAGIC open?

No, BLIND MAGIC does not offer free project estimates.

No, BLIND MAGIC does not offer a senior discount.

Are warranties offered by BLIND MAGIC?

What services does BLIND MAGIC offer?