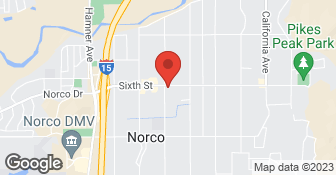 We are Family Owned and Operated Tree Service company based in Riverside, Ca. We have over 10 years of experience and have the equipment to handle any job small or big. We provide professional Residential and Commercial Tree Services. From Tree Trimming, Tree Removal, Yard Clean Up/Hauling, Irrigation, Property Maintenance....

They removed my neighbors tree that blew over in the high winds. I showed them my tree damaged. They gave me a price and offered to remove it and grind the stump. They were honest, trustworthy and prompt. They left no mesz. They cleaned up after themselves. Thank you!

Description of Work
Removed a tree after winds blew it over.

They did a good job with the work and the clean up.

Description of Work
Cut back tree in back yard

Excellent job!!!! Will definitely use them again.

Ezra Tree service did a fantastic job. They trimmed my trees very well and they removed the trees I no longer wanted and did an exceptional job. They even came back and repaired a sprinkler they accidentally broke. Overall, a great company and I would highly recommend them

They did a really good job of pruning and removing the identified trees. They could have done a better clean-up of their own litter, but I would hire them again based on their tree trimming expertise.

I reached out to Ezra via Angie's List to set up a time to meet for a quote on Sunday evening. Ezra called me first thing Monday morning and said he could be by as he was working in the area. We met at 9 AM, he provided a competitive quote, and because his crew was in the area he had them come by early that afternoon. From the time I requested a quote to the time the job was done, less than 24 hours had passed. That's responsiveness I can appreciate! To top it off, Ezra's crew was quick and cleaned up well after the job was done. They also respected my plants and made sure not to trample them. I will hire them again next year, and recommend their service.

tree and stump removal, trimming other trees and bushes

Description of Work
My spouse got a quote for a portion of the job we wanted. When following up, I inquired about additional items to be done and I noted the price to be extremely fair, if not better than other companies. His guys were there earlier than arranged time and I can why. After doing a walk around talking about what to be done, I ran an errand for maybe 15-20mins tops. When I came back, they already had the tree down to a stump and almost all of the other backyard trees trimmed. Amazed at how quick it was happening and how good it was looking already. They made sure to get the largest roots and the clean up was more than I expected (they even skimmed the rogue leaves out of our pool). And they made sure we did a final walk around before taking off for the day. Impressed overall and will definitely use them for maintenance of our trees/shrubs.

A lady in Ezra's office called and set up an appointment for an estimate. As I recall, Ezra came over from Riverside about half an hour later. He looked over the situation and gave me a quote. I think he probably would have gone a little lower, but I was struck by how much lower it was than a previous quote from another company, I immediately agreed. I do think it was a fair price all the way around. His crew, headed by Trinidad, arrived on the morning two days later and set to work. Trinidad spent the morning up in the tree tops, his performance almost like a choreographed ballet as he cut sections of tree that fell heavily to the ground, missing my house by designated inches. His crew carried the heavy tree sections out to the woodchipper and one ground the stumps out of the ground. Finally they cleaned up the whole area, collected their check, and were finished in less than a day's work. I was pleased with the job they did and feel much safer in my house now. I also appreciated the fact that Ezra's was a local business in Riverside, only a short drive from my home in Redlands.

Description of Work
Seven Trees of Heaven were clustered behind my garage. I didn't think anything could kill them, but indeed they were dying and I was afraid some might fall on my house. They had to be removed. They were practically a small forest of fully grown, very tall trees.

Very Excellent. Went above and beyond the call of duty. These guys really know what they're doing. Fast and efficient. Highly recommend.. excellent pricing as well.

They did quality work for a reasonable cost. They respected our property and had very good communication. We found them reliable and would call them again.

Ezra Tree Service is currently rated 5 overall out of 5.

No, Ezra Tree Service does not offer eco-friendly accreditations.

No, Ezra Tree Service does not offer warranties.