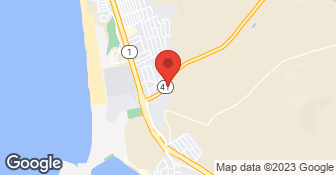 Serving SLO County since 1974. We take pride in making sure our customers HVAC systems keep them comfortable and safe. We now offer high technology Duct Sealing Services, saving customers up to 30% of their home energy bills. Call us for more details! Sloco Heating & Cooling provides a complete service for air conditioning, heating and ventilation equipment. From the design of your air conditioning or heating system, to the installation and ongoing maintenance, Sloco Heating & Cooling will ensure that you have the most cost effective and energy efficient furnace and air conditioning system to satisfy your requirements....

Phil and Paul treated us great. I wanted Mitsubishi mini-splits and my wife was skeptical. Phil showed her the units involved and we are very glad to be free of the gross, leaky, 35 year old ducts in this house. They did two installations for granny unit and main house...about 3500 sq ft.

We are very pleased with Phil and his crew at SLOCO. A year and a half ago we met with him about HVAC for an addition we were putting on our house. He sells many different kind of systems, but we decided that the Mitsubishi mini-split system fit our house well. We get over 100 degrees in the Summer and in the 20's in the Winter on occasion and the systems have been able to keep up with both the heating and cooling just fine. When we started to remodel the main house, Phil had originally suggested a significantly expensive, but very efficient propane-fired furnace. After an energy audit (suggested by him,) he realized that the improvements were going to significantly reduce the size of system we needed and sold us a mini-split system that saved us about 40%. COnsidering that we are on solar now, that 40% savings is compounded by the propane savings of about $1200/year. I only gave a "B" on punctuality because a guy had to run out for parts or something once and I'm worried that the review won't be considered trustworthy if I gave all A's. We've been in over two years of remodel h*** and I have a long list of sub-contractors I intend to character assassinate on Angie's List later, but I wanted to publish the best reviews first: Phil has been great to work with, saved us money, and I would unreservedly recommend him and SLOCO.

Thank's so much for the review [Member Name Removed]! We really appreciate the positive feedback, and of course are very happy to have helped improve your home. You've been a pleasure to work for, and we take pride in having customers like yourself. Don't forget to tell your friends and family where that comfortable "indoor breeze" is coming from this summer!
5.0

Description of Work
So far we have just had a consultation and a demonstration, followed by a formal bid for our yet-to-be-built-home. President Phil Kispersky bid it 2 ways, for a conventional forced air + cooling system and for the Mitsubishi mini-splits system. We're favoring conventional. He's terrific and trustworthy, and so is Chris, the installer. We're awaiting final plans to work out the ducting and consummate the deal.

I called yesterday to have them look at my furnace after another company couldn't fix it and recomended replacement. Chris arrived this morning on time. He spent about an hour and a half and found the problem. It wasn't getting air because of a blocked inlet duct, so it was shutting down when it ran out of oxygen. He charged $210 as advertised and saved me about $5000 for the new furnace I almost bought. Highly recommend. Honest, reasonable and competent.

Description of Work
Checked the furnace after another provider recommended replacement

Thank you for the positive review (removed member name)! We really appreciate it, and are always happy to find a solution that works best for our customers. Please don't hesitate to give us a call if anything else should arise with your home system. We'll be back ASAP to take care of you any time you need.
5.0

It was the first time I had used them. They first checked out everything that could be saved but suggested to just replace everything. They did exactly what they said they would do and charged me exactly what they estimated. They were on time and the workers were friendly and polite.

Description of Work
They replaced my furnace and the vents.

Very well overall. We upgraded both items after the start, which added to cost and time but estimate was two days. It was twelve for completion! They are quite competent and professional. The system is immensely improved over the old setup, in function. Hopefully operates more economically also. Very quiet and comfortable.

Description of Work
Remove and replace furnace and water heater. Repositioned from bathroom to crawl space. Re-ducted 80% of house. Re-plumbed and electrical to new site. Plumbed for exterior water softener placement (by others).

Chris communicated as to arrival time. This was an emergency situation. Worked all day & did extra details to improve the situation.

We actually had the work done a couple of years ago. They did such a good job I thought they deserved a great review from a new member of Angies list. They were on time, completed the work neatly and promply. They even helped me with the paper work for the government rebate that was current at that time. They did exactlly as they said they would. We had a problem the second year and the owner himself came out (no charge) fixed the problem, something that actually did not pertain to the equipment he installed. Great company. If you need a new heater these are your guys

Description of Work
.They installed a new heating unit.

HVAC work requires skill, so when you need a new part or system installed, repaired, or maintained, let Azteca Enterprise, Inc., handle the task from start to finish. When you work with us, you will have a dedicated HVAC professional available to answer any questions that arise and update you every step of the way. To schedule an appointment for an on-site estimate, call Azteca Enterprise, Inc., today.  …

At Kenneths we're here to service the central coast and surrounding areas. We accept all major credit cards and offer several types of discounts and payment options. 15+ years of experience Please contact the office for scheduling at 8054609305  …

Wighton's, Inc. is a customer focused heating and air-conditioning company that was originally started in 1953. Our company specializes in designing, engineering, and installing complete comfort systems for owners of existing homes and buildings just like yours. We take special pride in the craftsmen we train and employ--a fact you'll notice immediately in the attitude and integrity they bring to your job site. Clients in the Central Coast have trusted us with all of their HVAC, air quality, water heater needs and more for over 60 years, we look forward to earning your business. LICENSE NUMBER: 738271. Please contact our office directly at 805-543-4881 to schedule. #comfortyoucantrust  …

SLOCO Heating & Cooling is currently rated 5 overall out of 5.

No, SLOCO Heating & Cooling does not offer a senior discount.

Are there any services SLOCO Heating & Cooling does not offer?