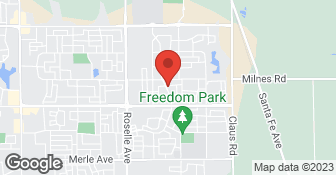 We are family owned and operated. Since 1989. We guarantee absolutely a mess-free environment. We provide a superb job at reasonable rates. We have the most modern equipment in the business and we provide a written report to our customers on every single job, big or small.

No one ever contacted me

Can't contact you if you don't leave a number. We have to have a way to contact you other than " Please call me back "
1.0

At the end of last year I bought a wood-burning stove insert from Rick McDonald, who owns this business. I paid in full for the stove ($3660.91), leaving a balance of $1029.31 for labor and parts, which was to be paid after the installation was complete. Problems arose during the installation: 1) Rick didn't tell me the stove needed an electrical outlet to work. 2) Rick's workers broke my fireplace hearth by dropping the stove on it. These things made it necessary for Rick's workers to make three visits before the installation was complete. Each time his workers (his sons Tim and Ben) had to reschedule, they requested that I pay the full balance ($1029.31). THIS IS ILLEGAL. I explained that my husband and I have a policy that we don't pay the full amount until the job is finished. Each time I refused they became vindictive or abusive, threatening to take the stove away (although I'd already paid for it), threatening to install it improperly, refusing to do the paperwork for my rebate, refusing to take my credit card, and adding extra unauthorized charges to my bill. Although none of the difficulties were my fault, Rick yelled at me, calling me "the worst customer he ever had in 35 years". When I first dealt with them, he and his son Tim were very polite and knowledgeable. I was shocked to find them acting so unprofessionally when problems arose. Eventually everything was sorted out, but dealing with them was an exhausting ordeal. I had to threaten a bad review, complain to Mastercard, check with the state regarding the legality of contractors asking for full payment before the job is complete. It was the worst experience with workmen I've ever had, and I've hired a lot of them. I don't think they'd have been so abusive if I were a man. On their last visit I had my husband come from out of town to provide support. I really wouldn't hire these guys.

[Member Name Removed] Amunson is not a customer of ours. The lady who did this is JANET WILLIAMS. She is too cheap to join Angie's List and so she used someone elses name. who actually paid for it. McDonald Chimney Service has not done any work for JANET WILLIAMS, our other company did, but with that being said, the rest is true. Im not sure if drugs are involved or what, but something isn't right. WORST CUSTOMER ANY BUSINESS COULD EVER HAVE!! This lady is crazy. She has done all she can do to try and harm our business. She didn't even hire McDonald Chimney Service. McDonald Chimney Service has never done any work for her. It says a man's name but it isn't. Shes using her husband's name to do this review. Tell her to provide a receipt from McDonald Chimney Service and post it with her review. She won't because she can't! It doesn't exist. She has a drug problem or something ! We never worked for [Member Name Removed]. Our other company did do some work for her. Yes, the old, brittle hearth did break under the weight of the stove. We paid to have the entire hearth replaced. We also did demand payment once finished and she dodged us for 3 weeks. We have plenty of reviews that tell the real story about our company. She is just a bitter, lying, mean, ugly nasty human being. She offered the crew cookies after the other company did the work. Now she posts this. Get off the drugs!
5.0

Great service. Great people. Will recommend McDonalds Chimney Service and have them back again. Thanks!

Description of Work
Had my chimney inspected and cleaned. Also had my second chimney inspected while they were here. They didn't know about the second one when I made the appointment but were happy to take a look.

Rick arrived about twenty minutes late to our house and then told me he was already late for his next appointment, this left me wondering how he was going to have time to clean and inspect my chimney and fireplace. After spending less than five minutes looking at our fireplace and down our chimney Rick informed us that he would recomend installing an insert. We were suprised that he would say this before he even cleaned anything since in all of our reading we learned that an inspection should only be done after a complete cleaning. Rick then spent the next thirty minutes trying to sell us an insert. When my Wife asked if she could see his license and insurance information we were informed that he only had a business license and his insurance was his automobile insurance. Rick tryed to convince us that he did not need any other type of license. After checking we learned that any person who does over five hundred dollars of work must have a contractors license. Not only would I not let this person install an insert in my fireplace I would not even let him back on my property since if he was injured on my property his car insurance most likely would not cover his injury.

Description of Work
Clean and inspect fireplace and chimney.

Obviously, he didn't check well. He said HE was in a hurry because I was running a little late. He had broken flue tiles and it could not be fixed according to NFPA Code 211. As for a contractors license, the great state of California does NOT offer any classes regarding installing a woodstove into a fireplace. The state told us we could take either a metal fabrication class or a fire sprinkler class to obtain a " specialty license" Neither one of those apply to what we do. We will not just pay the state to say we are contractors when the license has ZERO to do with what we actually do. Look it up!
5.0

He did a great job and even explained to me in detail about the firebox and what to look for to know we needed repairs. He left the interior looking as good as new and was very prompt and courteous. Plus, he cut me a great deal of only $75 on the chimeny sweep since he was already out for other repairs. HIGHLY recommended.

Description of Work
We needed the cap on our chimney completely replaced and the chimney swept.

The technician arrived on the appointment date and even at the exact time of the appointment. The fireplace was cleaned very professionally and the fireplace inspection was very detailed. I was truly impressed with the knowledge he gave me and pointed out possible repairs need in the future. I was also impressed with the detailed written inspection report and that this data will be placed in their database. I was told that I will receive a phone call in the Spring to set up an appointment for a free fireplace inspection to ensure the integrity of the fireplace is still operating satisfactorily and to ensure compliance with fire safety codes.

Description of Work
I requested a chimney sweep of my fireplace system and the free inspection.

It went very well, Rick was professional and very nice...He was nice over the phone and my daughter said he did a great job.

Description of Work
He came to check the chimney at my daughters home, because it was a newly purchased home, and although we had a inspection of the home, I wanted to be sure the chimney was safe for fires as there are little children in the home. My daughter said he did a great job, was on time, and very pleasant. He cleaned and checked the chimney and said it was in good condition and left. He also told me he would contact me next yr and would inspect it for free. Now thats NICE!!

Description of Work
Swept the chimney of a 3-story home with two fireplaces. Cleaned and vacuumed the fireplaces. Performed a very good service with a minumum of disruption and left the site well cleaned up. Provided a statement of chimney/fireplace condition and serviceability.

????? Rick was prompt, courteous & professional. He removed and inspected the fireplace insert (which was found to need new window gaskets) and did a thorough inspection and cleaning of our chimney. We really appreciated his attention to detail and he was very careful to make sure that our home was spotless when he left!

Description of Work
Cleaned and inspected chimney and fireplace insert.

Rick was very nice, helpful, and informative from initial phone call to completion of service. Scheduled the cleaning a week prior and after calling around I found his price to be very fair. He called to let me know on the day of service to confirm and arrived promptly at the scheduled time. He worked efficiently all while continually informing me of the condition of my chimney and maintenance tips. Rick did a wonderful job and look forward to using his services again next year.

Description of Work
Chimney and fireplace was cleaned and inspected.

I needed my Gas Fireplace insert checked and if necessary the chimney cleaned. He explained that the left panel of the firebox was cracked from top to bottom and would have to be replaced before using the fireplace, and that in the future I would have to replace the back panel was well.. He told me what I needed to buy and install to make it work again - he said that was an easy process and that I could do it myself. He explained that I needed either a hearth rug or preferably a hearth installed by code. Apparently the former owner removed the original hearth.

Description of Work
Checked gas insert for cracks, checked if the chimney needed, cleaned the firebox.

Clean Vents Specializes in providing Quality Air. Cleaning and Sanitizing Air Vents, and Bathroom Fans is what we pride on. Our sanitizing fogger system is one of a kind. We also Clean and inspect Dryer Vents . Chimney Sweeping is within our expertise.  …

Elite window and gutter offers window cleaning, gutter cleaning, screen repair and new screens. We have 20 years of experience to help you with your home maintenance needs! We guarantee your satisfaction, and we won't leave until the job is done right. We pride ourselves on the quality work we provide, while delivering great customer service! Call or click for your FREE estimate today!  …

McDonald Chimney Service is currently rated 4.2 overall out of 5.

No, McDonald Chimney Service does not offer eco-friendly accreditations.