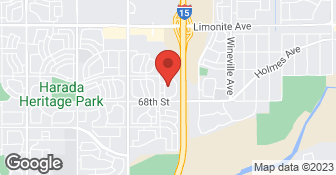 90039Great personal service, he communicates well. On time, took pictures of the work along the way, pleasant to be around, roof is repaired and we received a long term warranty on the roof.

n't understand. His english is pretty good, but falls short on more advanced conversations. In the end, I knew I was going to get nowhere with him. So, I called my realtor. He had received a call a few minutes earlier from the listing realtor who had happened to drive by the place earlier and saw the workers. She was beside herself with fear and anger. She kept saying, and quot;we haven't closed on the house and the bank would be liable if one of those workers fell--and the bank would never go for paying for roof repair..and quot; and so on. She was afraid that the entire sale may have been jeapordized--for too many reasons to list. Ultimately, I felt bad for the 2 guys--who spoke virtually no english--who had put in 8 hours of GREAT roof work, in the blazing sun. So, I wrote a check and gave it to the poor tired sweaty guys. On the up-side: The work is beautiful, the leak repair has a 5 year written guarantee, and the workers left the place almost as clean as they found it. The downside: The work was not done according to the plan, and we were not consulted. The very purchase of our new house could have been jeapordized. And, if something does go wrong and we never get to close on the place--I'm out $950!!!

Description of Work
We had a mixed experience, but one that could have cost us our house! Oscar (the owner) showed up on time at 10AM for the estimate. In fact, he had already been there for 15 minutes when I arrived at 10:02AM--and had already walked the entire surface of the very large 2 story house we are in escrow to buy (any day now). While he was up on the roof, Oscar took lots of pictures with his cell phone that were very helpful in showing me not only where the leak was coming from, but ALL of the other things that needed to be repaired as well--to prevent leaks from developing. His professionalism and thoroughness were very impressive. Plus, he's just a h of a nice guy. Here's where things get sticky... We didn't know if the bank that is selling the property would see the roof leak as a "health and safety" issue, which they would be obligated to pay for prior to closing with us. Or, if they would see it as a minor repair that would be our problem to pay for. So, we (our realtor and I) told Oscar to e-mail the propsal/work-order over to the realtor on TUESDAY the 29th, and he would submit it to the bank for review. I told Oscar, "if the bank refuses to pay for the work, then I will still hire you to do the job after we close on the sale". He agreed, and we all went our separate ways. On Memorial Day--May 28th--my wife and I stopped by the house, and there are 2 roofers working away like mad men--and had been there all day!!! They were almost done!!! Then my cell phone rings and it's Oscar asking if I would please write a check for the $950 we agreed to and give it to one of the workers before they leave. I tried to explain that the work should never have been started, and that he had agreed to just send an e-mail estimate on Tuesday, the NEXT day. And reminded him that all 3 of us--he, our realtor, and I--were all agreed that this was how we would proceed. His reply was something like, "I start right away to get the work done". Then he asked again if I could give a check to the workers. I tried to remind him that we were supposed to submit a proposal to the bank to see if it could be covered as a part of the sale, but he apparently did

Prompt Courteous and professional. They came exactly when they said they would and although the job took several days, they cleaned the job site daily. Oscar Rodriguez (the owner) is a stand-up guy who really takes pride in his workmanship. Replaced the roof with beautiful new materials. Replaced rotted wood (showing me what he had removed-yikes, the wood was so rotted it was spongey). Came in very close to estimate even though there was more wood rot than anticipated. He works in the great LA area (I live near downtown LA) and is prompt, courteous and professional.

Description of Work
Roof was a mess (tar paper blowing off) and they replaced not only the house and garage roof, but also rotted wood and installed new fascia board and gutters. Also put a coating on the roof to ensure longer life of materials.

New roof and roof repairs -See our Deals Page to save on shingles, metal, tile, wood shake, slate, and flat roofing. We also do polyurethane spray foam, hot mop, torch down, TPO, energy efficient roof coatings also Coordinate with solar installs. Locations in PalmDesert, Riverside and Beaumont Ca. each location services 60 miles radius We are known as one of the reliable roofing companies. We are a team of 10 people that are dedicated to providing quality roof repair, replacement, and other roof-related services to clients who are in need of our expertise. Even though the company has started in 2007, we have been working in the industry for over 25 years. That is over 2 decades of experience! We provide service to both residential and commercial customers. Whatever the job, you can count on us to provide you with quality roofing service! Construction side of Dove Remodels, room addition, concrete slab, driveways, kitchen, bathroom remodeling, complete home renovation, house flips  …

Berry Roofing, Inc is a family owned company that has done over 30,000 ROOFING JOBS DONE RIGHT THE FIRST TIME. We specialize in all types of roofing systems - Repairs - Re-roofs - New Construction - Residential - Commercial & Industrial. We are BPI Certified for properly knowing how to insulate and ventilate your attic. We hold a C39 for roofing - A C43 for Sheet Metal - A C-2 For insulationand C-46 for Solar. Please give a call for a free estimate and experience top notch customer service.  …

How is All Rain Roofing overall rated?

All Rain Roofing is currently rated 4.3 overall out of 5.

No, All Rain Roofing does not offer eco-friendly accreditations.