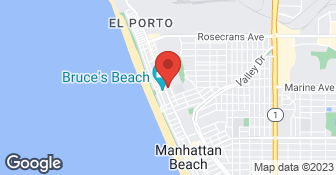 A Plus is a professional handyman service. Customer satisfaction is our top priority....

They showed up on time and were very professional. The work was done well. There were a couple spots missed in the gutter cleaning, but overall it was very good.

Description of Work
They cleaned my windows and gutters.

I share one of the fences with my neighbor to the South, and she had Bob build her a different fence that she liked. So I went with Bob because he was her preference. It turns out that she hired Bob because he does such a good job cleaning her windows! I'm not sure how the fence/window connection developed. It suited me well, however, since I needed both fence repair and power-washing. There was a little mix-up at the beginning, where Bob's crew showed up early with replacement boards and wood trim that was all pine, while my fence is redwood. As soon as Bob showed up I pointed it out to him and he immediately sent a guy back to get the right material. After that initial mix-up, Bob really went the extra mile. Some of the boards on the North fence had shrunk, so that about a 1/2 inch gap was present. Bob installed small wood strips to close the gap - no extra charge. After the work was proclaimed complete, I identified a place behind the grill where the crew forgot to stain, and a panel where they forgot to add the strip. Bob was very friendly and business like and came out and corrected the issues. The best part about working with Bob is that he kept to his word. He was friendly and approachable. He gave me a firm fixed price and stuck to it. He could have used the old boards to repair the fence but he decided to buy new ones. He not only fixed the design flaw I had pointed out (the lack of the strip at the top) but he also found and repaired two fence supports that had allowed the fence to sag. These faulty supports were probably the main cause of the fence damage.

Description of Work
Repaired and upgraded two damaged tongue-and-groove fences. These fences, which separate my swimming pool from my neighbors to the North and South, were new about four years ago, but I didn't put the stain and sealant on right away as I had intended. This, plus a design flaw in the original fence led to some boards warping and shrinking and falling out. Also, the fences had picked up a lot of dust and dirt and didn't look as good as they should. So the job was to power-wash the fences, repair the boards that had fallen out, install 1" strips across the top so that the boards would stay in, and to put one coat of stain/sealant on my side of each of the fences.

I had submitted a very positive report on this company after using them in 11/05 (the $75.00 report)...what a difference 7 months makes! This time, I spoke to 2 receptionists, both nice, set a time, and when I wanted to confirm the that the price would be the same, was told they had my previous information. After they called to make the appointment time earlier, the workers were a half hour late. The owner came with the workers (I hadn't met him before) and when I mentioned the $75.00 price I'd paid previously, he looked at me like I was crazy and said he wouldn't leave the office for less than $125.00. Regardless of what I said, he insisted that I was wrong. He was very arrogant and dismissive and at one point announced that he was taking his workers and leaving. Since I needed the job done, I agreed to the price, but he continued to be unpleasant and unprofessional. Regardless of the good job the workers did, because of the owner, I would not patronize this company again.

Description of Work
Windows throughout a small second-story apartment and their screens were cleaned. However, the last time I used this company, I was charged $75.00, the two workers who came were very efficient, clearly experienced at window washing and got the job done in less than an hour. This time, the workers, while nice guys, seemed inexperienced. I had to show them how to remove the screens and how to remove the sliding window panels. They did a good job, but it took them at least an hour and a half, almost twice as long as the last time. Pleasant guys, but a very different experience from previously.

I CALLED 7 DIFFERENT WINDOW CLEANERS OFF ANGIES LIST ON THE SATURDAY BEFORE THANKSGIVING, AND THIS COMPANY WAS THE ONLY ONE WHO CALLED ME BACK BEFORE THE WEEKEND WAS OVER...IN FACT, ONLY ONE OTHER COMPANY CALLED ME BACK AT ALL! THE OWNER MADE A TRUE EFFORT TO TRACK ME DOWN, HE FOLLOWED UP QUICKLY ON WHAT I NEEDED DONE, STAYED IN TOUCH THROUGHOUT THE PROCESS, AND CHECKED IN WITH HIS WORKERS AFTER THEIR ARRIVAL TO MAKE SURE THEYD GOTTEN HERE. HIS TWO WORKERS WERE PLEASANT, EASY TO COMMUNICATE WITH, AND PROFESSIONAL; SIMPLY GOT IN HERE AND GOT THE JOB DONE. THE PRICE IS RIGHT AND THE JOB WAS WELL DONE. WILL DEFINITELY CALL AGAIN.

Description of Work
NEEDED ALL THE WINDOWS (9) AND DOUBLE PATIO DOORS CLEANED IN MY APARTMENT, AND I NEEDED IT DONE RIGHT AWAY...WEEKEND BEFORE THANKSGIVING! THEY NOT ONLY GOT BACK TO ME QUICKLY AND GOT OVER HERE WITHIN TWO DAYS, BUT CLEANED THE WINDOWS, AND THE SCREENS AS WELL, PERFECTLY AND IN RECORD TIME.

I WOULD CALL THEM BACK, BECAUSE I LIKE THE WAY THEY CLEANED ALL MY WINDOWS. THEY DID IT ALL IN THE SPECIFIED TIME FRAME. THEY DID AN EXCELLENT JOB AND MY WINDOWS LOOK VERY GOOD.

Description of Work
THIS COMPANY WAS VERY NICE AND THEY DID CLEAN THE WINDOWS VERY WELL, AND THE PRICE WAS REASONABLE. THEY DID IT IN THE TIME FRAME THAT THEY TOLD ME IT WOULD BE DONE.

Father & Son Sewer Inspections offers over 40 years experience in complete sewer and drain solutions: repair, replace and rehabilitate any existing sewer and drain. We pride ourselves on keeping up with the latest technology and equipment to offer solutions to any challenges your home may have. Please call the office the office today to schedule an appointment at (818) 612-2219.  …

Insured
All statements concerning insurance, licenses, and bonds are informational only, and are self-reported. Since insurance, licenses and bonds can expire and can be cancelled, homeowners should always check such information for themselves.To find more licensing information for your state, visit our Find Licensing Requirements page.
General Information
Free Estimates
Yes
Eco-Friendly Accreditations
No
Payment Options
Check
Senior Discount
10%
Warranties
Ask for details

Frequently Asked Questions & Answers about A Plus Services

How is A Plus Services overall rated?

A Plus Services is currently rated 4.3 overall out of 5.

What days are A Plus Services open?

A Plus Services is open:

What payment options does A Plus Services provide

A Plus Services accepts the following forms of payment: Check

Does A Plus Services offer free estimates?

Does A Plus Services offer eco-friendly accreditations?

No, A Plus Services does not offer eco-friendly accreditations.

Does A Plus Services offer a senior discount?

No, A Plus Services does not offer a senior discount.

Are warranties offered by A Plus Services?

No, A Plus Services does not offer warranties.

What services does A Plus Services offer?

Are there any services A Plus Services does not offer?