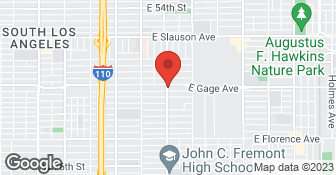 3 EMPLOYEES. NO SUBS. COST DETERMINED BY THE JOB. NO TRAVEL CHARGES.

He does great work and he very detailed. I like the fact that the work was not messy at all and he kept things very clean and neat. This guy has a great personality and is just wonder to work with.

Description of Work
I had Manual paint the exterior of my home that included doing the wood work and trim.

A really amazing experience I had with having my mid-century modern house restored. My house has a lot of exterior wood. Most was dry- rotted when I purchased it. I hired a guy to repair it all, and he did such an awful job I was not even able to paint the house after he finished. I then hired another guy to redo it, and it was better than the first guy, but not much. I painted the house and decided to call it a day. After a few years I hired Manuel Alfaro. He had to remove all of the exposed rafters and beams (vertical & horizontal). He replaced them all exactly the same way as when the house was built in 1959. He was able to solve a lot of problems the house had with getting things to line up straight. No one else was able to come close to his quality workmanship. He did a perfect job of painting also.

Description of Work
Painted exterior of house and replaced a lot of dry rot wood on a mid-century modern post & beam style house.

Home 2 Renovate, Inc. has been a family and friend owned and operated home improvement company since 1992 and is licensed, bonded and insured. We specialize in all types of roofing, exterior paint/stucco/coatings/sidings, windows & doors, whole house insulation, patio covers/sunrooms and gutters. We are a Better Business Bureau accredited company with a A+ rating, a League of California Homeowners member, National Association of the Remodeling Industry member. We are top rated on Better Business Bureau, HomeAdvisor, Angi, Thumbtack, Networx, Houzz, Modernize, Google and we are ranked as one of the Top 500 contractors in the nation with Qualified Remodeler Magazine. We believe that communication is the cornerstone of a good homeowner/contractor relationship. Call today and schedule a free quote good for a year with a product specialist.  …

I have been a handyman for over 20 years. I offer very competitive prices. I can do electric work, carpentry, painting, remodeling, flooring, fences, concrete, general handyman jobs, and much more! Trust me, I can offer you the best deal. Secondary email:handymenexperts123@gmail.com For larger jobs I have a trusted team of workers that I know very well and are extremely professional. I have never left a job undone or cut any corners to save myself money at your expense. I strive to get you the best deal, and have developed a knack for haggling even at stores like Home Depot to save my clients hundreds of dollars on materials like doors, refrigerators, wood, and almost everything else. I am always on the hunt for the best prices and deals. I offer general handyman services, as well as remodeling service. My expertise is in wood fencing, having many contacts to give me unparalleled low prices for materials, but I also excel at many other contracting jobs.  …

Insured
All statements concerning insurance, licenses, and bonds are informational only, and are self-reported. Since insurance, licenses and bonds can expire and can be cancelled, homeowners should always check such information for themselves.To find more licensing information for your state, visit our Find Licensing Requirements page.
General Information
Free Estimates
Yes
Eco-Friendly Accreditations
No
Payment Options
Check
Senior Discount
10%
Warranties
Yes

How is ALFARO PAINTING overall rated?

ALFARO PAINTING is currently rated 5 overall out of 5.

No, ALFARO PAINTING does not offer eco-friendly accreditations.

No, ALFARO PAINTING does not offer a senior discount.

Are warranties offered by ALFARO PAINTING?

What services does ALFARO PAINTING offer?