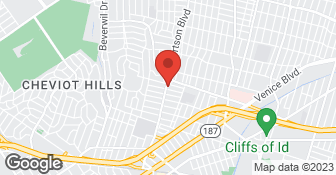 Your search for a house cleaning Los Angeles based service is over. Our maid service in Los Angeles or further could take away the hassles of cleaning and let you focus on the fun of life. Call us Today.

We hired them to clean our new home before we moved in. The home was empty so I thought it would be relatively easy. There was no furniture to work around, no knick knacks to dust etc. They sent a crew of 3 people. Problems: 1) The crew was a little late but not a big issue. The issue was the time they recorded was earlier than the time they arrived. This is a problem because I was being charged by the hour. 2) One person was quick, clean and efficient but the other two people were really, really slow. Again, a major issue when I'm being charged by the hour. It was so unreasonable that it was almost comical how slow and inefficient they were being. And the areas that they supposedly clean were still dirty. 3) The owner or manager, Fred, did not live up to his promise for satisfaction guaranteed. I called him immediately to tell him I was not happy. I sent the crew home early because it was such a big issue and I did not want to waste any more of anyone's time. Since Fred had promised me satisfaction guaranteed I told him I'd like him to send a new crew but he said (almost verbatim), you can't make everyone happy. I reminded him that he has a "satisfaction guaranteed" on his website and he also verbally committed to that over the phone. He told me that he cannot guarantee satisfaction. He also insisted that his crew did a good job even though he was not there so I offered to have him come and see it for himself. He refused. 4) I then asked for a discount because I ended up having to hire someone else to reclean the entire house. He was so nice before I booked him but then all of a sudden I saw his nasty side! It was like Jeckle and Hyde...he became really rude and almost combative over the phone. I had to ask him several times not to raise his voice and that I wanted to discuss the problem like adults in a reasonable manner. I finally got him to calm down. Then he did become more normal. He ended up giving me about a $20 discount on a $270 job. I ended up paying someone else to reclean the entire place...going over the areas that his crew supposedly already cleaned. I've used other cleaning services before. Unfortunately, the service I normally used was not available the day I needed them. I would never, ever recommend them. They send out a lot of flyers and coupons so without looking into it much, I just called them. It was a terrible, stressful experience and the work was unacceptable.

Description of Work
Was contracted to send crew of 3 people to clean new home before move in. Home was empty at the time.

Complete disinfection with Electrostatic Spray Technology! As everything goes back to normal, it's important to make sure the necessary precautions are taken for both your home and business. Electronic spray is a new way to apply cleaners, sanitizers and disinfectants to help treat surfaces, often in less time with better coverage. The result is a uniform coating of sanitizer or disinfectant on sprayed objects, including hard to reach areas that manual cleaning can miss. At Property Maid, we are here to help and our promise is to deliver tailored, professional services with proven disinfecting methods to tackle coronavirus head on.  …

Bonded
Insured
All statements concerning insurance, licenses, and bonds are informational only, and are self-reported. Since insurance, licenses and bonds can expire and can be cancelled, homeowners should always check such information for themselves.To find more licensing information for your state, visit our Find Licensing Requirements page.
General Information
Free Estimates
No
Eco-Friendly Accreditations
No
Payment Options
Check, Visa, MasterCard, American Express, Discover
Senior Discount
No
Warranties
No

How is 3 MAIDS overall rated?

3 MAIDS is currently rated 1 overall out of 5.

What days are 3 MAIDS open?

What payment options does 3 MAIDS provide

No, 3 MAIDS does not offer free project estimates.

No, 3 MAIDS does not offer eco-friendly accreditations.

Does 3 MAIDS offer a senior discount?

No, 3 MAIDS does not offer a senior discount.

Are warranties offered by 3 MAIDS?

No, 3 MAIDS does not offer warranties.

What services does 3 MAIDS offer?