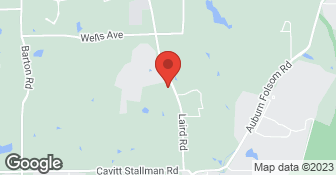 At Allegiant we live by the motto “Consider it done!” Fully licensed and insured, Allegiant is a full service general contractor who specializes in concrete and landscaping services. With over 20 years of experience in the industry, we can do it all – from small tenant improvements to major home and landscape renovation. Our dedicated, drug free employees help to set us apart with their professionalism, integrity, and quality of work. We pride ourselves on delivering complete customer satisfaction while adhering to all industry standards and regulations. ...

He came for the appointment, but told me that he had to leave, but would be back soon to do the estimate. He had to drop off some fuel for another job. But then he never came back. I called him after about 3 hours, and asked about him coming back. To this he blew me off, and I haven't heard from him since.

Description of Work
I called him to get an estimate for a job.

Used a different contractor. They didn't seem too interested and never got back to me.

Description of Work
Nothing performed other than receiving estimates

Description of Work
They visited with me to see what I wanted. They came out several times, and even drove around the neighborhood so I could show them what I liked, which seemed really great, some businesses I called for an estimate didn't bother to return my call, so they were ahead of the game here! They were very good at sales. They said they could easily do what I wanted, told me how nice it would look, and their estimate seemed realistic, i.e. less expensive than other estimates, but not so cheap as to make me nervous. They showed up at my house, took away old concrete and sod, poured new concrete for a driveway and sidewalk down to the curb through the lawn, which was stamped and colored, and put in new landscaping (bark chips and plants) and landscape lighting.

Overall the experience was wonderful. From the very beginning Bob and his team were responsive, prompt, and very understanding of our limited budget. Bob worked with my husband and I to choose the color and texture of concrete we wanted - who knew there were so many choices :) We decided to go with stamped concrete which looks more natural for our country home. We even added a brownish tint so it matched the exterior of our home. The crew finished on time and on budget. Because of their quality of work and kind staff we decided to hire Allegiant to do our weekly lawn maintenance. Each week the landscape crew comes to our home and mows, blows, edges, prunes, and picks weeds. We have been very satisfied with all encounters with Allegiant. Thank you!

Description of Work
My husband and I recently built our dream home in Newcastle, CA. We hired Allegiant initially to install a colored, stamped concrete driveway but loved their services so much we decided to make them our weekly landscape maintenance provider as well.

We can take care of all of your concrete and masonry needs.  …

Bonded
Insured
All statements concerning insurance, licenses, and bonds are informational only, and are self-reported. Since insurance, licenses and bonds can expire and can be cancelled, homeowners should always check such information for themselves.To find more licensing information for your state, visit our Find Licensing Requirements page.
General Information
Free Estimates
Yes
Eco-Friendly Accreditations
No
Payment Options
Check, Visa, MasterCard, Financing Available
Senior Discount
No
Emergency Service
Yes
Warranties
No

How is Allegiant overall rated?

Allegiant is currently rated 3.2 overall out of 5.

What days are Allegiant open?

What payment options does Allegiant provide

No, Allegiant does not offer eco-friendly accreditations.

Does Allegiant offer a senior discount?

No, Allegiant does not offer a senior discount.

Are warranties offered by Allegiant?

No, Allegiant does not offer warranties.

What services does Allegiant offer?