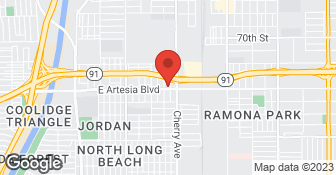 Dewey Pest Control has been providing environmental security since 1929. We are family owned & operated with 32 Branch offices in California. All of our technicians & inspectors are licensed by the state and are regularly trained in the latest laws, technologies and application techniques. Dewey is family founded, owned and run for over 80 years. Also does business as Dewey Services, Inc

Description of Work
came back 4 times for flea problem

Description of Work
Provided advice on how to kill a rodent under the house. Their price to provide services was too much for me for what I needed. There was no charge for the visit. _x000D_|

We had too many spiders, ants, crickets, flies and bees. The spray worked on the spiders only and lasted maybe 2 weeks. I was hoping for better results since I was paying a company to kill all the bugs in the yards. We made a quarterly contract with them. So far I don't think it's worth it. It's best to buy a few cans of spray and do it yourself for less.

Description of Work
Dewy sprayed our front and back yard for insects.

It went pretty well. I think the price was reasonable. They really got the job done and that's what I like. There really isn't anything I didn't like.

Description of Work
Dewey Pest Control came out for an exterior spray.

They come out every few months. They didn't charge us when they recently came out. They have been reliable pest control for us for several years.

Description of Work
I have used Dewey Services INC. for pest control. They recently came out for a mouse problem. They gave us some glue traps and showed us where the mice could be getting in.

They have been fantastic. I have used them for many years. They are affordable. They call me the day before they come, and the day after to make sure everything is OK. They are really accommodating and very, very reliable. I pay through e-billing so there is no paper bill. They are responsive, punctual, and professional. I would use this provider in the future.

They give me satisfactory service at a reasonable price.

Description of Work
I use the service of Dewey Pest Control every month.

They use natural products and they are very good. It was a one time deal. They were very professional and helpful. I spent only $50 as the rest was covered by home warranty. The ants haven't come back.

Description of Work
I used Dewey Pest Control for ant treatment about two months ago.

They don't charge extra for the bee and wasp removal. I am satisfied with my experience so far.

Description of Work
They come every month to spray. We have also had them do bee or wasp removal.

First few service calls were good; thereafter service was very lousy. They had high technician turnover - new one very frequently, some only showed up once before quiting; service was spotty and incomplete or they did not show up as promised, nor did they call beforehand as promised. Service was terminated after the requisite period and they subsequently billed for services not provided, which was contested by me as I don't pay for services not rendered Complaint was filed with California Attorney General's office due to their unsupported collection calls. A complaint also filed with Better Business Bureau. Would not recommend them in the least! Stay away from them. Per other pest control companies I've subsequently hired - they are known as being "pump jockeys" in providing service, which means poor and incomplete service to clients. High staff turnover is also an indication of the type of company they are. Could be location of office but I would not use them nor do I recommend them. There are better, more conscientious providers out there who really provide the service they promise.

Description of Work
Hired them for semi-monthly pest control service for exterior of house only. Service they promised was to spray outside premises and clear cobwebs, etc. as part of normal maintenance. Signed 1 year contract per their request. I requested they call the house to notify me prior to date of performing service.

I am doing some renovating and I wanted to get rid of them before we hacked into a termite hole. The price was pretty good. Dewey is one of the few companies who does the fumigating with their own crew. Most others are more interested in the repairs and sell the fumigation job to someone else. I felt more comfortable with Dewey's employees doing it for me than someone else who was pulled for the job. There is no way to judge how well the job was done, but I think it was good.

Description of Work
They fumigated my termite infected house for me.

The person that I used was very thorough and very responsive. I'm very happy with the service.

I WAS SATISFIED WITH THE WORK THIS COMPANY PROVIDED. THEY GUARANTEED THEIR WORK FOR 60 DAYS, BUT EVEN AFTER THE 60 DAYS I SAW NO SIGN OF ANTS OR SPIDERS. NOW THAT I HAVE THIS ANT PROBLEM UNDER CONTROL, I HAVE THIS COMPANY COME OUT EVERY 3 MONTHS TO SPRAY MY HOUSE TO PREVENT THIS PROBLEM FROM RECURRING.

Description of Work
HAD A VERY BAD PROBLEM WITH ANTS AND SPIDERS. THEY WHERE ALL OVER MY YARD. THEY WERE IN THE WATER HOSE SPOT, AROUND MY DOOR, I MEAN EVERYWHERE.

WE HAD A TERRIBLE PROBLEM WITH ANTS BEFORE THEY WERE HIRED. NOW, WE HAVE ABSOLUTELY NO PROBLEM WITH ANTS. THEY ALWAYS LEAVE A NOTE WHEN THEY COME (SINCE WE DON'T NEED TO MAKE APPOINTMENTS) AND THEY'LL TELL US TO CLOSE OUR DOORS/WINDOWS IF WE'RE HOME.

Description of Work
THEY COME ONCE A MONTH TO SPRAY THE PERIMETER OF MY HOUSE FOR ANTS. I'M ON A MONTHLY CONTRACT (THE PRICE LISTED IS THE MONTHLY FEE). THEY'LL SPRAY INSIDE AT NO EXTRA CHARGE IF NECESSARY.

NOT VERY RESPONSIVE, NEED MANY CALLS TO DEAL WITH SPECIAL REQUESTS. AFTER CANCELING SERVICE, STILL SENT US THE BILL SO IT SEEMS THEY HAVE BOOKKEEPING PROBLEMS.

Description of Work
LIMITED TO KILLING ANTS AND SPIDERS AROUND THE HOUSE.

Dr Termites is a locally owned family business. We are a licensed pest control company and specialize in Termite Pest Control. We are THE Termite Experts. We do not charge for inspections and provide free estimates. Same day appointments are often available. All our work comes with a full warranty.  …

Dewey Pest Control is currently rated 4.2 overall out of 5.

No, Dewey Pest Control does not offer a senior discount.

No, Dewey Pest Control does not offer warranties.

Are there any services Dewey Pest Control does not offer?