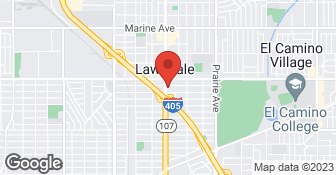 They were punctual, courteous and gave a reasonable rate. I would use them again if I needed them.

Description of Work
The seal around my drain cut outs was loose which was causing a leak. They fixed this.

They did an excellent job. It was very reasonable, and I had checked with other companies, they were by far the most fair and honest. They even did a couple extra things and did not charge us! When they came back to adjust the skylight they were sweethearts about it and really went the extra mile for us.

Description of Work
We had a slow leak in our roof. We weren't sure where it was coming from. They came out and diagnosed the leak as coming from a skylight. We have a 2 story home with a very high roof. They had to take off a 10 ft square of roof tiles off, change the tar paper, and repair the leak. We replaced the skylight with a custom skylight that opens up which they installed. They had to change it 3 times due to error of me not realizing which way it opened.

They did a very good job.

Description of Work
They replaced some tiles on my roof.

Description of Work
I got an estimate for fixing a leak in my roof.

The company showed up on time to give me an estimate. Which to me is huge. Trying to get most contractors out, much less on time, has been very difficult. They were very professional and very reasonable considering the amount of leaks we had. After we got the estimate they were then able to come out right after and do the job. When they showed up for the job they were on time and completed the work very quickly. When it came time to pay they didn't try to sell me work I did not need. They showed me what they did and gave me a contact number in case I had any questions or problems. I have not had any problems what so ever. I will recommend this company to my friends or family if they have any roofing problems.

Description of Work
We were experiencing multiple leaks in our office. They came out and patched those areas and made sure no other areas needed repair.

The service was wonderful. Everyone was very professional and knowledgeable. They arrived ready to do the work and completed it the same day. I did not have to miss any work. I would recommend this service.

Company responded right away. The price I paid was the price I was quoted over the phone. They responded when no other roofers would even return my call.

They took a while to get someone out to my home and when they finally did they sent one person that did not know how to do the work. They sent another person out and he did a little work, but did not complete and have not heard back from them. I had to pay up front. I have had trouble with them from the beginning. They do not show up when they say they will and only do half of the work.

Description of Work
They were to find the leaks and patch them for me on my roof.

THANK YOU SO MUCH FOR GIVING US A CHANCE TO RESPOND. IT IS OUR ABSOLUTE INTENTION TO LISTEN TO AND CAREFULLY EVALUATE, TO THE BEST OF OUR ABILITY, WHAT TRANSPIRED HERE. WE HAVE PLACED A CALL TO THE MEMBER, AND LOOK FORWARD TO CONVERSING WITH HIM IN FULL INTEGRITY.
5.0

Description of Work
FIXED A LEAKY ROOF AND AROUND THE FIREPLACE CHIMNEY.

VERT IRRESPONSIBLE COMPANY. THEY WOULD HARDLY RETURN YOUR CALLS. PRICE TOO HIGH. ROOF WARRANTY IS NOT VERY RELIABLE, I FELT I GOT THE RUNAROUND WITH THEM.

Description of Work
REPAIRED ROOF ON DIFFERENT AREAS, THEY CAME AND PERFORMED A WATER TEST PRIOR TO THE REPAIRS, AND A FINAL WATER TEST TO CONFIRM ROOF WAS REPAIRED.

WE ARE TRYING IN EARNEST TO REACH THIS CLIENT.
1.0

The overall experience was very UNSATISFACTORY. Not only did they not repair the original leak but in fact the roof leaks in 4 more places with even greater water damage after their 'repairs'. At one point we got our insurance company (AAA) in on it and the roofer they sent out (Monterey Roofing Company -which we later contracted with and they did a WONDERFUL job) had photos and described the sub-standard job that Advanced Roofing Company had done. They did not show up at the agreed time & again with no phone call. They demanded final payment (threatening to send us to a collection agency) when we were still trying to get them to fix the original leak. We are currently in the process of taking them to small claims court to try and recoup our money. I would never recommend them & not only are we out the money but now with greater damage will have to replace a ton of carpeting also. Interesting to note - they stopped talking to us after AAA sent a qualified roofer to inspect the work.

Description of Work
Repair leak in roof. We have Spanish tile roof and we needed some repairs completed to stop a leak around our fireplace. They gave us an original estimate (which they later increased with additional costs) and did a 'leak test'.

WE ARE CURRENTLY IN TOUCH WITH THIS MEMBER.
5.0

THEYRE VERY GOOD. THEY RESPOND RIGHT AWAY. THEY CAME AND FINISHED THE WORK. THE PRICE WAS GOOD. THEY DIDNT COME UP WITH OTHER MONEY AFTERWARDS. THEY WERE GOOD. IF WE HAVE ANOTHER PROBLEM, WE WILL CALL THEM. THEY SEND PROFESSIONAL PEOPLE. THE WHOLE THING IS EXCELLENT.

Description of Work
THEY REPAIRED THE WHOLE ROOF, THE FACIA BOARD AROUND THE HOUSE, AND REPAIRED SOME OF IT ON TOP.

Home 2 Renovate, Inc. has been a family and friend owned and operated home improvement company since 1992 and is licensed, bonded and insured. We specialize in all types of roofing, exterior paint/stucco/coatings/sidings, windows & doors, whole house insulation, patio covers/sunrooms and gutters. We are a Better Business Bureau accredited company with a A+ rating, a League of California Homeowners member, National Association of the Remodeling Industry member. We are top rated on Better Business Bureau, HomeAdvisor, Angi, Thumbtack, Networx, Houzz, Modernize, Google and we are ranked as one of the Top 500 contractors in the nation with Qualified Remodeler Magazine. We believe that communication is the cornerstone of a good homeowner/contractor relationship. Call today and schedule a free quote good for a year with a product specialist.  …

We are general contractors who specialized mostly in solar, roof installs only (no repairs), windows, AC systems installs only (no repairs), exterior paint, landscaping, hardscaping, design services etc. We would love to come out and provide you with a quote for your home remodeling project in the most professional way possible. We guarantee your satisfaction, and we won’t leave until the job is done right. We pride ourselves on the quality work we provide, while delivering great customer service! Check out all the services we offer below and call -or- click to schedule a free estimate today!  …

Advanced Roofing Solutions Inc is currently rated 4 overall out of 5.

No, Advanced Roofing Solutions Inc does not offer eco-friendly accreditations.

No, Advanced Roofing Solutions Inc does not offer a senior discount.

No, Advanced Roofing Solutions Inc does not offer warranties.