With Angi since October 2012 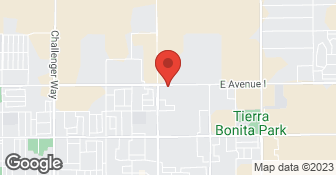 "YOUR #1 SOURCE FOR CUSTOMER SATISFACTION" OUR QUALITY WORK,COMPETITIVE PRICES AND 20YEARS EXPERIENCE MAKES US THE BEST CHOICE FOR YOUR NEXT FENCING NEEDS. CALL NOW AND RECEIVED 15% DISCOUNT  …

We have the experience and dedication to bring your dreams to reality! Specializing in Plumbing Services, we guarantee your satisfaction, and we won’t leave until the job is done right. We pride ourselves on the quality work we provide, while delivering great customer service! Call or click to schedule a free estimate today!  …

Paradise Landscaping provides general landscaping and lawn beautification service and offers a worry free, professional service for its customers, keeping their lawn looking its best year round. We're owner operated and I love my work. I'm dedicated to brining life back to all of my customers lawns. We are a full service, professional, company that does guaranteed top notch landscape work. We do our work correctly, never cutting corners to get the best possible results. We do all jobs big and small. Call for a free estimate and we will work with you.  …

This is not my first rodeo with Cruz Martinez. He's faithful, punctual,and professional. I highly recommend him for this service...

Description of Work
Landscaping and overall yard maintainence of both back and front yards.

For about four years now, Cruz has maintain my two properties with a level of expertise and professionalism that is unsurpassed. Every Thursday he arrives to both properties in a timely manner to provide expert maintainence. I couldn't ask for a more faithful gardener. Cruz responds to my calls and requests quite promptly. I am well pleased with his service. NOTE: Sodding and hardscaping (including sprinklers, drainage and seeding) on one property cost approximately $11,000, while monthly maintainence is $90 each property...

Description of Work
Landscaping and hardscaping for two properties. (Lawns maintained, sprinklers installed, drainage installed, sod installed in one large backyard, front yard seeded, installed two iron gates, installed a colored and stamped patio across the length of one backyard including sidewalks leading to the front yard on both sides of that property, finally, he installs plants and drip lines and expert tree trimming when needed, installed a valve outside so that he can control/adjust the sprinklers when required). Cruz has maintained these two lawns for about fours years now, so this review is long overdue.

I called and left a message, which was returned quickly by the office. I explained the problem and set an appointment for someone to stop by and give me an estimate. Cruz came out to my house and I showed him the problems I needed repaired. He gave me a very reasonable estimate, which was less than I'd feared everything would cost. We set a date & time for him to return to do the work. I came home from work early that day to meet him and discovered he'd already finished part of the job! He and his workers then finished the rest of it within about 20 minutes. After they left I was checking everything out and found out one of the zones wasn't working--no water was going through. I called the company back and left a message (it was already past 5 p.m.). I was surprised to see Cruz and his workers return roughly 30 minutes later, and they fixed the issue right away. In short, Cruz Martinez Landscaping was prompt, professional, and each of them were terrific. I will certainly give my business to them again, and will refer others to them as well.

Description of Work
I had a leak somewhere in the sprinkler system which had made a large hole in the ground, as well as leaks to a drip line hose, and one of the gaskets where the pipes are. In addition, one of the sprinkler zones was no longer working due to some sort of wiring issue (according to the control panel).

I have used them since ten or twenty years. They are very faithful and they are always there. Whatever I want them to do they are there. They come every Saturday.

Description of Work
They take care of my lawn.

Description of Work
When we agreed on a fee it took a week before he was able to start work. He began the landscaping April 12, 2013. It consisted of laying cosmetic rock in areas of our front loan where only dirt had been. He finished the work on April 13,2013. It turned out beautiful. Our neighbors remarked on what a wonderful job he had done on our property. He accomplished what we had agreed he would do.

The work is beautiful. The patio was stamped and colored to match the house. The lawn in gorgeous. The gates are wonderful. The sprinklers and drainage system work very well. Everything turned out great. I would recommend him to family, friends and colleagues. He has a great team that works with him.

Description of Work
He put in a 22 square hundred foot backyard lawn, a patio, a drainage system and two gates.