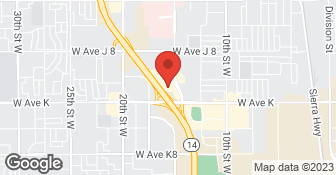 AC Dave is a family owned & operated small business with 5 employees. We accept all major credit cards, checks & cash at the time services are rendered. $24.99 discount for first time customers and new maintenance agreement of one year or more. Diagnostic charges are deducted from the price of repairs. License Number: 877683, give us a call today!  …

They were awesome and we have used them twice now. Their price was competitive when we used them for the first time to replace our furnace so we didn't compare their price with others during the second time. I think their price was reasonable. The quality of their work was very good and they responded to us within one day.

Excellent and I was very happy. I would use and refer them again. They were the most reasonable of the two other guys I called.

Description of Work
Put in new furnace and AC.

When I first complained about the unfinished job, they sent the "General Mgr" to finish it. He still didn't get it right, so I sent photos of the problems to the owner. He sent the rep. to see it & he agreed it was poor workmanship & they would redo it. To make sure "I was happy" he said the GM would bring a "Free Maintenance Contract" for me when he came to fix things. The biggest issue is that they didn't live up to their promises, provide a detailed, signed contract or get permits & inspections. The equipment wasn't YORK Branded and the badge had been removed from the condenser. I called YORK and they identified 2 items as being lesser quality items made by YORK but not the "YORK brand" & couldn't identify the 3rd. I called the Rep. about it. He claimed it had all been bought from a YORK dealer, was made by YORK & he hadn't promised top quality YORK brand. They finally provided a hand written, unsigned, undetailed invoice only showing a balance due & no maintenance contract.

Description of Work
I learned the hard way not to let work start w/o a signed contract. They had made a very high bid to install a complete new HVAC system in a 2 brm 1 bath house. Their rep. called to say due to a cancellation they could start immediately if we accepted their bid. We renegotiated to within $500 of the low bid & for the difference he promised to use top quality YORK brand equipment, pay all permits & inspections, & do everything else listed on the lower bid which he claimed was using lesser quality stuff. Two guys showed up 2 hrs late w/o a contract, promising to bring it the next day and then left after a few hours. The next day they were an hr late but installed all the equipment. It took 5 days to complete the job, I was never sure if they were going to come back and finish & I never got a contract. Some of the work was shoddy & had to be redone several times after I complained, registers installed crooked, poorly installed gas line and AC condenser. I had to fix some of it.