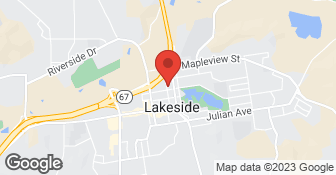 We are one of the oldest and most well established rain gutter companies in the San Diego area. We offer free written estimates, prompt estimates and warranty our work. We are fully licensed, bonded and insured. We have a large fabrication facility and can do anything custom and we have the largest variety of seamless gutter machines around. Our employees undergo background screening and we use E-Verify. We have one of the largest portfolios of copper gutter installations including rain chains, leader heads and a extensive experience with rain water harvesting. We also offer flashing, deck metal and other custom sheet metal fabrication services. Additional email - info@affordablerg.com

The company is not responsive after calling them twice. We will not use them.

This was the worst experience I have ever had with a company. Initially I was told the job would take two days. It has taken four days so far, and it not done yet. But that’s not the worst part. The crew that arrived (late) were rude. They arrived late again the second day. They arrived late again the third day. They didn’t show up the fourth day, a Friday. They left razor sharp pieces of metal ALL OVER! I spent the evening of the third night in the emergency room with my son who stepped on a piece of the metal which went THROUGH his foot. I spent Saturday at the vet with our dog that stepped on a piece of the metal. The metal is hard to see, I’ve tried to get it all and I inspect the yard everyday and keep finding more. I called the company to tell them that the crew left metal scraps all over the place. They don’t care at all. I’ve also called to tell them that there is a section where there is no downspout, it’s just a collection on the second story. I’ve asked for the general manager to contact me. Again, nothing. But they didn’t hesitate to send me their bill. Unbelievable. I would love to speak with the owner.

Great experience from estimate to completion of installation. I have a flat roof & had a company (Christian Roofing) install new roof (TPO) & taper kit to allow drainage. I was then able to have Affordable Raingutters install the gutters & downspouts. We haven’t had any noticeable rain, so I won’t be able to see if this alleviates ponding; but I expect a big difference!! Great company(s) to work with!!

Very competitive price. Arrived on time, got the job done as requested. With the broad election of colors, I was able to select a color that virtually matched my home and didn't need to paint!

They were on time, professional, polite and quick. They were able to install the gutters on a difficult round turret and made everything look great. I would definitely use them again. Very Good!

Description of Work
Installed gutters on much of the house

The waiting list was long, close to two month. They arrived on time on the scheduled day and completed the work quickly and efficiently.

Description of Work
New rain gutters and downspouts on the rear patio area and front entrance of the house, approximatley 65 linear feet total.

Very professional company: arrived on time, great job! I was out of the country and everything was taken care of with no problems.

Description of Work
Extended rain gutter on 1 side and installed new gutter on other side of house.

Very well. They came out to give us an estimate and were back two days later to install the gutters. We are very pleased with the job. hi

There's not much to say about gutters. We hired them to install basic gutters, but were impressed with their ability to put them up quickly and (apparently) correctly. I can't say for sure until we get a good rain. But I appreciate the warranty and their availability for repairs, if needed in the future.

Description of Work
Installed gutters on all appropriate edges of the roof for our two-story house in Bonita.

Installation was quick and flawless. The price including an Angie's list discount was unbeatable.

Description of Work
I got 117 feet of gutter and 60 feet of downspouts, custom routed to accommodate some new rain catchment barrels.

Simply put, these folks are amazing. To get our gutters replaced, we got bids from three different companies. Affordable Raingutters won our business in large part because they are a local company that's very active in the community. Their bid also beat others by a fairly wide margin. They installed high-quality seamless aluminum gutters and accompanying downspouts. Mr. Tim Starks came out to take measurements and give us a quote. He explained what they'd do and how they'd do it, and he was willing to work with us through the color selection (and change) process. Their workers came out and removed our old gutters, installed the new equipment, and cleaned up the mess. My wife says that I got her raingutters for Christmas (I'll have to remind her of that in a couple of months...). Overall, Affordable Raingutters did an awesome job, and I highly recommend them.

Description of Work
They replaced our raingutters and downspouts.

Very professional installers. They were able to answer any questions I had regarding the installation. Job site was cleaned up after all work was done.

Description of Work
Installed rain gutters and downspouts. Also had to install a diverter on the roof over garden room.

There were no rain gutters on the residence. Despite the fact, they worked me in, during my trip, since they knew I needed to go back home. The got me in and still gave me an Angie's List 10% discount. On quality, time will tell, what I will say is that California has a rainy season and San Diego goes months without rain. We won't know exactly, because one of the things we were trying to do was reduce noise from the rain coming off the roof going all the way down. It is at least 2 stories high. Without any rain gutters there was considerable noise. The responsiveness was just fantastic because they were very, very busy. They cared to try and fit me in and I wanted to see that in person. I would use them again, because they certainly have a lot of experience.

Description of Work
They measured, estimated, and formed rain gutters for $650.00. They had to design them for a rooftop deck.

Good. Minor hiccup that should have been caught by appraised but the crew quickly recognized it and was able to move forward.

Description of Work
Had rain gutters removed and replaced.

My only complaint was they did not show the first time they scheduled and did not call to tell me that they could not make the scheduled appointment, I had to chase them down. I wasted an afternoon waiting for them. However, when they did show up, they did a good job, I was very satisfied.

Description of Work
Gutters on my house.

Affordable rain gutters arrived on time, kept me informed, confirmed what I wanted and colors picked.

Description of Work
Service quote. Installed gutters and down spouts.

Estimater was on time and very pleasant to work with. I trusted his advise and felt good about the estimate. Work is scheduled for January 2017 per my request

They gave us a fair quote (we had 3 quotes). Scheduling the job was easy enough. Two days before they called to move our appointment a day ahead of schedule which suited us fine. They were punctual, professional and did a very good job. The material was good quality, matching the color we wanted and they fabricated the whole thing on site.

Description of Work
Installed rain gutters and leaf guard in the front of house.

The crew did an excellent job. My home is 60 years old and had never had gutters installed. Probably because the fascia is sloped and past owners could not figure out how to install them. The gutters are black, match the trim and are hardly noticeable. I am extremely pleased!

Description of Work
Installed rain gutters on my home.

The project was easy from start to fish Excellent customer service.

It went horrible! Affordable Raingutters installed gutters that were not level, had holes in them, and did not drain! They came back out, uninstalled all the gutters, and installed all new gutters on the house. While these were better than the previous gutters, approximately half of the gutters still pooled water on the opposite side of the downspout. Multiple attempts were made to have Affordable come out and repair them, but they were unsuccessful in all attempts. Now I will need to have another company come out and install new gutters, repair the damage, and send Affordable Raingutters the bill. Sadly this is turning into a legal issue.

Description of Work
Installation of Rain Gutters on new house.

Obtained 2 estimates and affordable was least cost. Professional service all around. Worker aimed to be courteous and act professionally.

On time, cordial & did a great job. They even missed a spot so they come back out & took care of.

They were all fantastic, prompt, courteous, friendly, professional always responded to my calls and questions, could not be happier.

Not well, at least initially. Ron from Affordable Rain Gutters came out and gave a very competitive quote, which I accepted. About a week later, they came and "installed" gutters on my house. The job was an absolute and complete failure. The gutters were uneven, and totally non functional. There were multiple holes in the gutters from where they screws through the side of the gutters, removed them, repositioned them, and put in more holes. The downspouts were not actually connected to the gutter, hanging below the gutters to the point where there was a daylight clearly visible all the way around the downspout. I called AFG and told them that there job was HORRIBLE, and Ron quickly came back and agreed with everything I was saying. He agreed to have a totally separate crew come out and repair the extensive damage done to my fascia board, remove the old gutters and send them to the city dump, where they belonged, and totally reinstall new gutters. The new gutters are MUCH better than the previous install, but still two are pooling water rather than draining which is very bothersome. Ron says they will send someone out again to fix this issue. Overall, while the price was competitive, the product was not worth the trouble. Unfortunately I cannot recommend this company.

Solar Smart Preservation and Cleaning is a disabled veteran owned family business. Our main service is solar panel cleaning but added more features that customers love to bundle. Windows, fencing, siding are some of the areas we clean. We started this company after hearing how our older citizens were being treated, we believe everyone should get top notch service and never get taken advantage of.  …

Our goal is to remain San Diego's most respected name in the seamless rain gutter industry. We have maintained an A+ rating with the BBB since becoming accredited in 1984. *For the most efficient service, please CALL or EMAIL directly @ 619-444-9191 Additional email - info@newraingutters.com.  …

How is Affordable Raingutters overall rated?

Affordable Raingutters is currently rated 4.6 overall out of 5.

What days are Affordable Raingutters open?

No, Affordable Raingutters does not offer a senior discount.

Are warranties offered by Affordable Raingutters?

What services does Affordable Raingutters offer?

Are there any services Affordable Raingutters does not offer?