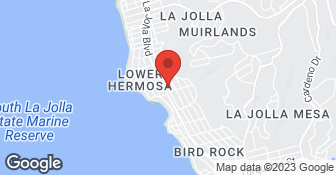 Happy Roots is local to San Diego and is an invested supporter of the community. The roots and legacy of our society are the children. A portion of all projects are donated to Rady Children's Hospital (or the charity of our client's choosing). Happy Roots Landscape currently employs the utmost experienced professionals and no job is too big or too small. Ben was born and raised in San Diego, and currently resides with his wife and two children in Tierrasanta. We are also proud members of the San Diego Chamber of Commerce. Happy Roots Landscape is licensed with the city of San Diego and the Contractor's State Licensing Board....

The experience was fine. First, they send out someone that could hardly speak English and he got all the information wrong, then the owner of the company called me and asked me some questions, I answered his questions, but then he came out to the house and didn't tell me he was coming out and then he sent me a bunch of e-mails giving quotes on things that I don't want or need, so the whole business was ridiculous. He could have picked up the phone and call, he could have met me out here, it's just ridiculous. They are unprofessional and they are bidding process.

Description of Work
I got a quote from Happy Roots Landscape for landscape irrigation.

What a nightmare! We gave up on these guys a month ago and are still cleaning up the mess (figuratively and literally). First, some good things: Ben came out quickly when we called to have the place looked over. They gave us a daily estimate that seemed fair and we agreed to work with them. Ben is very nice, soft spoken, but really seems to know his stuff. He had nice software to show us what he was going to do and sat down with us to plan it out. Unfortunately, it went downhill from there. The billing practices are unorganized at best and downright shady at worst ($30 for gas to go 15 miles, but $10 to go four blocks?). Extra workers were sent to the job and our daily rate was increased without previous discussion from us. When we tried to ask about things we received an incredibly nasty email saying things like, "we are only talking about $42.98 over the agreed upon amount. We are trying to get this job done for you and I thought you'd appreciate the initiative in having more guys out there than the agreed upon amount." and "Furthermore, every time I send you these daily emails I have to spend the next hour explaining back and forth the update. I would hope by now the trust is in place and we have moved past all this." (this was day three, but there should be trust, right)? Additionally, their billing system is that you will receive an email at some point when Amy has time but she expects it to be paid IMMEDIATELY. One Saturday, we received the bill at 9am and she was calling us by 10, yelling at my husband that we were two days overdue (which we weren't). It only got worse. The workers would not show up for days with no notice from Ben or Amy as to what to expect. We were billed for hours the workers weren't there. We were billed for bags of cement the workers left out in the rain. We had to ask repeatedly for receipts for materials we had already paid for. Finally, a month and a half after our deadline, with the hardscape not completed, we gave up on them. Then they left, with our tools. I have had four or five friends ask me who we used for our yard and we couldn't warn them off fast enough. For you, I will just leave you with the facts and let you decide.

We contacted Ben and he came out and gave us an estimate. Then after a few months we moved forward with the project.

Description of Work
Happy Roots Landscape came out and did our new house's lawn. We changed the irrigation, put in new grass and got a new landscape. We love it and enjoyed using Ben.

We have the experience and dedication to get the job done right! Specializing in general home repair and remodeling services; We guarantee your satisfaction, and we won't leave until the job is done right. We pride ourselves on the quality work we provide, while delivering great customer service! Call or click for your FREE estimate today!  …

HomeTurf is an artificial turf installation company with over 13 years experience in the trade. We pride ourselves on our impeccable lawns and our dedication to a positive customer experience throughout our sales and construction process. We are licensed, bonded and insured. Our sales representatives and support personnel are extremely courteous and professional. We want to work to earn your confidence and exceed your expectations.  …

We are a full service Commercial & Residential landscape provider including the design and the installation of softscape and hardscape landscapes, as well as water features and lighting. We specialize in irrigation, masonry, and design.

Happy Roots Landscape is currently rated 2.8 overall out of 5.

No, Happy Roots Landscape does not offer a senior discount.

Happy Roots Landscape offers the following services: We are a full service Commercial & Residential landscape provider including the design and the installation of softscape and hardscape landscapes, as well as water features and lighting. We specialize in irrigation, masonry, and design.