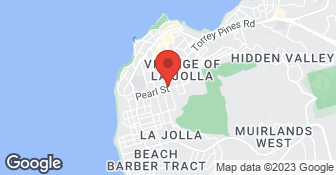 2 employees. Uses subs for all labor. Cost is determined by the job. No travel charges. No service fee. May contact through email....

Toilets were original, builder's installation from the 70's. Installer removed and replaced with top of the line Toto units and took about 1 1/2 hour per unit. All function well. Workman did very good work.

I had used Handyman of La Jolla and Del Mar to do some previous work. The man who did the work, Cyrus Flores, was a careful, conscientious and skilled worker. When I contacted the company about doing this job, I asked that Cyrus do the work. Cyrus and I developed a very detailed job-scope, sent it to the owner for his review; he added his comments, we agreed on the terms and work began on November 30th of 2009. The first problem was when I paid the first invoice with my credit-card - as I had done on the previous job. The owner's wife told Cyrus to tell me that their credit card machine was broken and I needed to pay by check or cash. I knew that a broken machine would not prevent them from calling in the charge.... so the owner and his wife and I went round and round about that. (See below) The job was progressing, and I was happy with the work that Cyrus was doing. Subway tile is unforgiving and proper, careful preparation is vital. [He did make the mistake of placing the coved wall tile on top of the floor tile instead of even with the floor tile, but by the time I discovered it, he would have had to tear out an entire wall of tile. He insisted his way was correct. (Bryan insisted it was correct too) I decided to live with it.] But more and more frequently, I could hear Cyrus and the owner fighting over the phone. Late January, Cyrus was either fired our quit. Bryan sent a new man, Dave, out to finish the job. The first thing he did was attempt to fix the floor where it had dipped. Originally Bryan said they would redo the floor, but he never ordered the tiles. Dave patched it as best he could but there are still inconsistencies and several areas of discoloration. Dave began the process of tiling the shower. In my opinion, it was not going well. I tried to get the owner out to see it, but he always had an excuse. The shower tiles are uneven, and I feel, improperly installed. When the owner finally did come out to see the job he blamed the crooked tiles on the hot mopping that was done. I've had other properties hot moped and then tiled and have never had a problem with uneven tiles. And even if it was a bad hot-mop job, I think they should have fixed that before attempting to tile over it. Bryan always says he will take care of it - 'all they want to do is make me happy' but then when Dave finally showed up a couple of weeks ago, he said the only way to fix it was to tear it all out and start over. I had asked Bryan to meet with me, but since he sent Dave instead, Dave called him to tell him what needed to be done....Bryan would not agree to it and blames it on the hot-moppers. Bryan wouldn't talk to me. Dave tried to reach the hot-moppers but they haven't returned his calls. I'm still not convinced its the hot-moppers' fault but I'd like a non-biased opinion. The tiles are unevenly spaced, they do not lay flat, raw edges show, cuts have nicks in them - especially corner cuts - and they are uneven. The paint

Description of Work
I hired them to remodel a bathroom for me. It was to be torn down to the studs and rebuilt in a style appropriate for a 1920's Spanish bungalow - subway tile on the walls, small hex tiles on the floor and an arched shower entry.

I was glad I found this company. I have used them several times and they always do a good job. I like that they are able to work around my schedule. He always shows up on time too.

Description of Work
They repaired the latch on my fence.

They did a very good job with building the decks. It looks great and the people who did the work were very professional and friendly, they were very prompt as well and basically did a great job. I thought the price was reasonable.

Description of Work
They built 2 wooden decks, one is 8 by 20 and the other is 6 by 20, they also painted them as well.

Let us check off your list! We are a collective of experienced, detail oriented, and INSURED handymen. We show up on time, communicate well, and treat your job as if it's in our own house. Check out our profile on Thumbtack, over 200 jobs and a perfect 5 stars (over 120 reviews and counting).  …

Handyman of La Jolla & Del Mar Inc is currently rated 4 overall out of 5.

No, Handyman of La Jolla & Del Mar Inc does not offer eco-friendly accreditations.

No, Handyman of La Jolla & Del Mar Inc does not offer a senior discount.

No, Handyman of La Jolla & Del Mar Inc does not offer warranties.