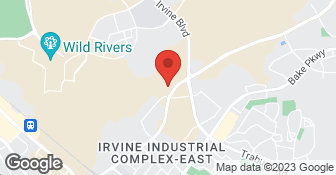 We use them all the time. They're very efficient. They seem like very nice people.

Description of Work
They come out every other month and spray the outside of the house. We've had them do a termite treatment and close up holes where rats had gotten in.

My overall experience with them is excellent. They come on time and they are prompt, and professional. I would use them again in the future if needed.

This company does excellent work and comes back if I need anything additional. The technicians have always been friendly, courteous, and very reliable. They almost feel like friends after working with them for a couple of years.

Description of Work
They come out bi-monthly for pest control.

They repaired all the damage that we had. They have been excellent and they have excellent workers as well. I am going to use their services in the future too. In fact, they are working on our other house and they just started today.

Description of Work
I use the services of Accurate Termite & Pest Control for termite control. My last interaction with them was today. They replaced all the siding and damage. They put up all new fences and rebuilt 2 decks.

We were very satisfied with the entire experience with Accurate Termite. They were the fourth company to do an inspection for us, and Jim did by far the most thorough inspection and made the best suggestions for how to treat the termite damage. Their estimate was in the lower mid-range of the estimates we received. John worked on our home for three days. He was prompt and courteous and very careful about completing each part of the job thoroughly. He cleaned the work area every day before he left and let us know when he would return. We will definitely use this company again.

Description of Work
Accurate Termite inspected and recommended drilling and/or chemically treating all visible areas of dry termite damage on the exterior of our house, as well as one place inside the house. They replaced the wood that was too damaged to be repaired with new wood which they primed before installing. They also treated all exposed wood in the attic with a state registered termiticide. We chose not to have fumigation done at this time because of the likelihood of damage being done to our existing wood roof.

Due to Accurate's ignorance of State laws, they cost me an extra $400 in unnecessary repairs. I hired them to treat the Section 1 items they identified when they first examined the property, and that went ok. However, I'm not sure they replaced some of the facia boards that I paid to have replaced. Per State law, they are suppose to certify all Section 1 work completed, and note any Section 1 work not completed. They did state that the Section 1 work was complete, but they noted Section 2 items as being incomplete. This was unneccessary, and they refused to remove the language from the document. At the time I was in escrow, purchasing the property, and I had to submit the document to my loan provider, who in return required that the Section 2 items be repaired before the loan could be processed. My escrow was due to close shortly, so I had to move forward with the work. Now, Accurate was suppose to replace 2 side doors and reseat a toilet, but instead they tried repairing the doors, and did a very poor job, and they refused to replace the doors after the work was completed. They said they were doing me a favor by getting the job done in time to close escrow, but the truth is that the Section 2 work wouldn't have been necessary if they had properly completed the Work Completed/Not Completed form in the first place.

Description of Work
They treated my house-to-be (2-story, 2400sf) for termites fumigating the property and removing the patio cover. They also unnecessarily reseated a toilet, and did a very bad repair job on doors that they said they were going to replace.

Preventative and Corrective Waterproofing Services for Decks, Roofs, Concrete, and all Below Grade structures. We are located in Huntington Beach and offer our Waterproofing Services to Huntington Beach, Palos Verde, Long Beach, Seal Beach, Newport, Laguna Beach, San Clemente, all surrounding communities. We are committed to resolving anxiety and stress caused by water damage through efficient, effective, and lasting waterproofing and rebuilding solutions  …

Providing natural alternative treatments, no need to tent your home! Excellent service in termite and pest control for both business and residential properties. call now for a free inspection.  …

How is Accurate Termite and Pest Control overall rated?

Accurate Termite and Pest Control is currently rated 4.4 overall out of 5.

What days are Accurate Termite and Pest Control open?

What payment options does Accurate Termite and Pest Control provide

No, Accurate Termite and Pest Control does not offer eco-friendly accreditations.

Does Accurate Termite and Pest Control offer a senior discount?

No, Accurate Termite and Pest Control does not offer a senior discount.

Are warranties offered by Accurate Termite and Pest Control?

What services does Accurate Termite and Pest Control offer?