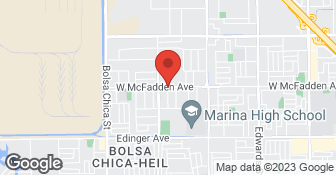 Hey guys, we're pretty new to the Angieslist and we are looking for your help in building our community. We are a family owned business, operating out of Long Beach, CA for almost 40 years. We are a small company consisting of 4 technicians and office manager, we service most major brands and types of appliances, whether your Stove isn't cooking, your Fridge not cooling, or your Washer not cleaning clothes, Don's Appliances has been "Saving Marriages" since 1977. Visit our website for more information and to book your appointment today!  …

We are a family owned and operated business with over 30 years of dependable service in the Orange County area.  …

A Plus Appliance Care

The first man came to my house with a leg brace on one leg and an arm brace on another. My laundry room is small and he kept complaining about how he had no room. He didn't have the lock necessary to make the repair, even though I had previously told them the problem over the phone. When I called them to see when they would come back I found out he was in the hospital and wouldn't be back. I asked if they could please send someone else. It took over two weeks to get the first incident repaired. The second repair man knew instantly what was wrong, a clogged drain. After he was done, the man said to give it a few minutes, and then left before it was running. I waited 5 minutes and it still wasn't working. I called the office again and asked her to send him back. She said she couldn't get ahold of him. She said it would be another 8 days before anyone could come back out to look at it. I was not willing to wait another 2 weeks to catch up on my laundry just because the repair man wouldn't wait 5 minutes to make sure it worked. I told them unless he came back that day or got an earlier appointment that I would put a stop payment on the check. I never heard back from them, so I put a stop payment on the check. The second and third service men appeared to know what they were doing. The second one was excellent and repaired the lock. The third one did diagnose the problem but did not wait to make sure it was functioning after he fixed it. I would be reluctant to ever call the 800 number for service ever again/.

Description of Work
I was having issues with my washing machine.

The convection oven stopped working properly on the Sunday 912/20/11) before Christmas. Called several appliance repair services listed in the phone book advertising Bosch appliance repair. All of them, (5) repair services said they do repair Bosch appliances but not Bosch ovens. I then called Bosch directly and was told a repairman could not be scheduled until the week after Christmas. Because I saw this as a big problem with full blown plans for cooking on Christmas Eve and Christmas Day I asked if there was any way I could get this oven looked at prior to the 24th. I was directed to an independent appliance service in Minifree that Bosch said does do oven repairs in my area (south orange county). When I called this service the man laughed and said he didn't do service in my area. So I called Bosch back and set up a service appointment for the Tuesday after New Years since we were going to be out of town the week after Christmas. To my surprise I received a call on 12/22/11 at about 3:00PM from the actual Bosch repairman (BSH Home Appliance Corp) asking if he could stop by in the next 2 hours to do the service. He said he had just completed his scheduled services for the day and could come by to do our service. Of course I was more than happy to have this offer. James Miller, the Service Technician, was professional and obviously knowledgeable about what might be wrong with the oven. Within thirty minutes he had diagnosed the problem, removed the inner workings of the oven, removed the burned out heating element part, put the oven back together making sure it worked and was on his way. Undoubtedly one of the best service calls we have ever had.

Description of Work
Replaced an element in the top convection oven of a dual Bosch oven.

It took this company 6 months to get my new refrigerator working correctly. They would send out technicians that were on contract. These technicians were rude, and there was miscommunication between them and Bosch. I was told it would take a couple of months to get the part in. It was a new refrigerator, and I was told that they had not produced spare parts and I would have to wait until they produced spare parts. I could disconnect the water from the refrigerator, but the whole reason I chose this model was for it's ice making capability. The refrigerator caused damage to my floor. This is a warranty case, and they don't want to give me a new refrigerator. When they do respond, it's in a negative nature. I finally got a new fridge, but it was the wrong model and it's leaking as well. They were rude, impolite, and unpleasant. They left all the trash in my backyard.

Description of Work
I bought a Bosch refrigerator.