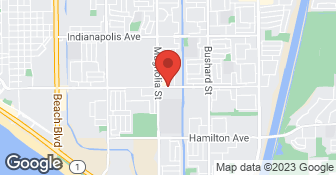 Brian, our GC on the project, detailed the project costs, kept us well informed, stuck to the overnight building schedule, and came in just over the budget, but well within what was actually expected by the business. The end results are awesome.

Description of Work
This was a Front Office Reception Area re-build. It required meeting the buildings' codes, insurances, and off normal working hours scheduling. The project required taking out the carpet, re-painting walls and doors, and removing a bamboo floor. Then building a new reception desk, putting in new carpet and floors.

Bryan, the GC, is awesome. He kept me informed throughout the process. Major and minor issues came up (as expected), and he / his team had great solutions which all met with my approval. The project was finished off on time with a high degree of satisfaction from me. Everything works, no leaks, the tile, glass, fixtures and fittings are all in great shape. Best of all there were no surprises in the overall cost. I genuinely will use Bryan on my next project, and will be recommending him to friends.

Description of Work
Complete re-model of one bathroom and partial on another.

BONAFIDE BUILDERS is a fantastic contractor!!!! They were able to modify and update our kitchen cabinets without sacrificing our granite counter tops. They also installed all of our kitchen appliances, LED can lights, windows, custom glass doors, attic fan and updated a full bath and a powder room. Their attention to detail and quality of work is very impressive....we couldn't be happier. They are great problem solvers and provide you with lots of knowledge and currents trends. We love all of our improvements to our home and would highly recommend Bonafide Builders to do your remodel.

Let me start off by saying I've used this contractor before, loved him, and referred him to everyone I knew, even strangers on FB asking for a good person. This last job was so awful it left me in tears for days. The job got off to a rocky start right away with $1750 in add on change orders, most of which were not told to me or approved before they were done. Then more change orders that were not communicated were done before informed or consented to. Some things I would ask for an estimate on, and let him know I had to discuss with family (this is my deceased mothers home to fix up and sell) and he just started doing even though I didn't give ok. Bryan, the contractor then started raging (actually screaming ) on the phone to my husband one day, me the next, then next week my sister over imaginary or grossly exaggerated issues. He also raged at us in person numerous times, and thank God is wife was there to get him to stop or calm down. He also pulled a bait and switch discussing with us to install bathroom vanity from a place he used called 405 Cabinets, which had quality cabinets, and a prefab granite counter with sink. Then half way through the job that changed to a cheesy Home Depot cabinet and faux counter and sink for $150. NOT OK. We feel very taken advantage of, especially by someone we trusted. He wasn't the cheapest estimate we got, but we hired him thinking we could trust him, not create additional work, or inflate anything. He was also my mom's contractor and would have liked to have given him the job. Big Mistake. If he had treated her a quarter of the way he treated us, she would have fired him. Only reason we didn't was to complete the job so we can sell the house. We ended up paying about 7K in change orders, half or more of which I didn't approve. We just paid him off rather then arging as we wanted to be done with him. It was an expensive lesson learned I don't know if he just got in over his head, or the job took longer then expected and he got mad, or if he was on drugs. Frankly his violent outburst reminded me of someone on speed that I knew. Not saying he is/was on drugs, but the whole experience was just awful and I wouldn't recommend to anyone. Too bad things worked out this bad as both my sister and I had other work to be done at our homes and will never ever deal with him again.

Our company invites you to experience prompt service and superior attention to detail. With over 12 years of experience our customer satisfaction is our top priority! We will earn your trust for a lifetime. We believe in making all clients repeat clients. You can be assured you're in good with our company working on your home improvement project. If you are looking for a contractor that follows business practices such as promptly returning phone calls, arriving on time for appointments and following through on promises then call our reputable company today.  …

CUSTOM CABINETRY INCLUDING KITCHENS AND BATHROOMS AND HOME OFFICES. We can do it all for you because we offer full contracting services including design, electrical, painting, plumbing & flooring. We specialize in kitchens, bathrooms and bookcase/entertainment cabinetry. Many of our customers are celebrities and designers. We are now offering the same service, quality, and design to everyone who are looking for the finest. We use only the highest quality furniture and cabinetry materials. Heartwood offers superior craftsmanship, problem solving, finishing, and customer service. Please check the photos on our website: www.heartwoodindustries.com.  …

How is Bonafide Builders overall rated?

Bonafide Builders is currently rated 4 overall out of 5.

Are warranties offered by Bonafide Builders?

What services does Bonafide Builders offer?

Are there any services Bonafide Builders does not offer?