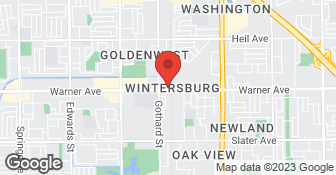 We were working on a DIY project and one of the circuit breakers overloaded and wouldn't reboot. Jody came out the next day and before his scheduled time. I liked that he called to say, if it was okay to come by earlier. Jody noticed a 15 circuit breaker should have been set as a 20. This was a great find, as two outlets that haven't worked in years, we could use now. It is hard to find a company that is honest and trust worthy. I can say they are. I am keeping this company in my file and will be using again.

After having electrical issues with a circuit earlier in the week which we thought we had fixed, we woke up early on a Sunday morning to find that half of our house was without electricity - including our refrigerator, dryer, TV, etc. Finding an electrician willing to come out on a Sunday was no small task - we called several who said they handled emergency work and either received no response, or would not come out. I reached Jody early in the morning, and he said he'd be out between 1-2. About noon, he called and was free earlier, so we had him come by. Jody quickly diagnosed the issue as a problem with our main electrical panel, which was broken and needed replacing (original panel in a house built in the 1970s). This is an extremely costly repair, unfortunately requiring a complete replacement job. He offered to try to put a temp fix in, but also offered to just replace the entire panel on the spot - on a Sunday afternoon, no less. This was extremely generous given the severe storm forecast for the next day - meaning it would normally be several days before it could be done. I am also heavily pregnant, so it was such a relief to be able to get the job done ASAP. Jody was quick, professional, friendly and efficient. After just a couple of hours, the entire panel was replaced, and our house was back to full electricity. He also referred us to a stucco repairman, as our older panel was larger - who will be handling this repair job later in the week. Although you never want to have to be hit with such a surprising cost, especially on a weekend no less, Jody made an unpleasant situation as pleasant as could be. The total cost was $2,500 plus the standard $300 call out charge for a Sunday visit. We will definitely call All City Electric for any future needs - hopefully not on an emergency basis!

Our company invites you to experience prompt service and superior attention to detail. With over 12 years of experience our customer satisfaction is our top priority! We will earn your trust for a lifetime. We believe in making all clients repeat clients. You can be assured you're in good with our company working on your home improvement project. If you are looking for a contractor that follows business practices such as promptly returning phone calls, arriving on time for appointments and following through on promises then call our reputable company today.  …

Conscientious Landscaping is an owner/ operated business that understands the importance of excellent customer service. We pride ourselves in offering our clients with the best, yet innovative options available. Our story begins in 1995 when we developed our vision and plan of action. Our vision is offering each client with its distinctive care for their gardens. Each garden, has a story, a color, a mood and its important that each garden is always in sync. We took time to study horticulture because we understand the importance of being knowledgeable. We can help you detecting nutrient deficiencies on plants, soil ph levels, irrigation, and thorough and detailed maintenance. Were always striving to provide our clients with informative and knowledgeable practices. Please contact us for all things horticulture , we are here to help. We're honest, knowledgeable and dependable.  …

How is All City Electric overall rated?

All City Electric is currently rated 5 overall out of 5.

What days are All City Electric open?

All City Electric is open:

What payment options does All City Electric provide

Does All City Electric offer a senior discount?

No, All City Electric does not offer a senior discount.

Are warranties offered by All City Electric?

What services does All City Electric offer?