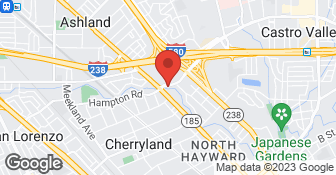 The success of this company is due to the personalized attention given to each of one of our customers. We keep a very close communicatin with our customers in all the aspects from the beginning to the end of the project providing satisfactoring results since costomers are able to have answers to any question or concerns about their project. We are a hands on general contractor company. Although, we subcontract part of the work in some projects we are still able to succefully provide an excellent service to our costumers, since we keep a very well cordinating work with the thrid party companies involved. Therefore. there is not room for confusion or long waiting periods to have the work scheduled to be done. We are confident that you will be plenty satisfatied about our work perfromance and to make it even more gratifyng for all Angies's List customer we offer a 5% discount

Not good never returned my calls nor gave me an estimate.

Description of Work
He showed up and the sales pitch sounded good, but he never returned my calls and did not give me an estimate. Maybe my job was too small, but very unprofessional. Glad I didn't hire them, because if this is the way they treat their customers I'd be in trouble.

They were prompt getting us an estimate and an explanation of what they could do. Once accepted and in the books, we had a start date that was 3 weeks out. They actually were here in 2 weeks and knocked it out. They came out and followed up to make sure we were content with the work.

Description of Work
Resurfaced our pool.

Description of Work
I made an appointment a week ahead with Paramount. No one showed up at the agreed date and time. When I called and tried to find out what happened, all I got was voice mails. My calls were never returned. They wasted lots of my time.

I was initially very please with Paramount Pools. The price was fair and the personnel courteous. After they completed the plastering job, I gave them an A rating. However, subsequently, a gray film has appeared over the whole surface of the pool. When I called Jorge, he came and took a look at it, and said that it was not normal. He said I should reduce the Ph to 6.8 and it would go away. I have by now added 20 gallons of muriatic acid and it has been 4 weeks. There are still gray streaks acroos a large area and the plaster shows cracks in several areas. I called Jorge, desperate for help. He has not returned my calls.

They did an excellent job. The only issue was that after starting to chip away at the old plaster, they called me and told me that my pool had been replastered before. Therefore it had 2 layers of old plaster. That meant more work to chip it all the way down to the gunite. That would cost $1,500 more! I had chosen PPP because of their low bid and good reviews on Angie's List. I was very upset. Jorge said that he could replaster without stripping down to the the gunite. I told him that other companies specified in their estimate and quot;strip down to the guniteand quot;. He agreed to drop the surcharge to $1,200. Notwithstanding this, PPP were still cheaper and did a superb job. My recommendation to others is to make the contractor be very specific as to his assumptions and state what are the incremental costs if these assumptions turn out to be incorrect.Jorge is a very pleasant man who is a pleasure to deal with.

I had Paramount come out to give me an estimate on refurbishing my empty swimming pool. It had been leaking water and we emptied it 2 years ago so it was time to either fix it or fill it in. The estimator/sales guy came exactly on time, discussed the process and the issues he could see and emailed me an estimate later in the day. The only fly in the ointment for this part of the process is that I wrote back and asked him what kind of things typically drove up the price of this type of project (originally slated to be a re-tile and re-plaster job) and he didn't have any. I think he could have but more on that later. The workers showed up exactly when scheduled and got right to work. They found that much of the plaster had lifted away from the gunnite and they really had to take it all down. They also found about 3 times as many structural cracks as estimated but that had been left open so that was okay. I was disappointed to be hit with the new charge of stripping the pool but Jorge cut me a really generous deal for the cost of the stripping and the extra cracks and I'm pretty sure I got the better end of the bargain. They also found that there were cracks in the corners of the pool and they applied extra rebar and concrete to those areas. They did not charge me more money for those repairs. The job started on 7/20 and by 7/29 water was flowing into the pool again and it looks great. The crew did a good job of cleaning up and I'm quite pleased with the outcome. I recommend Paramount without hesitation.

The person from this company came over to give me a quote, but instead he took a look at the problem and told me what to do to fix the problem. I experience I had with him was excellent. I would definitely contact them when I have a problem. They guy that came was very honest and helpful. He did not charge me anything for the advice he gave me.

Description of Work
I called Paramount Pool Plaster to do some job for me in June but they came and gave me some advice.

Called Jorge in early June to look at pool and recommend actions to be taken to eliminate a major algae growth problem. He suggested re-plastering since the pool plaster was 24+ years old and had multiple micro-cracks. Gave me a quote on the spot and promised to send an official quote via email within the week. Unfortunately, it took several phones call over the next three weeks to get the formal quote, but once received and accepted, his crew was very punctual, hitting every date on time. The work performed was very good. They cleaned up after each day's work, leaving the area spotlessly clean. It has been a month plus since the plaster job and everything so far looks very good. Final price was exactly as quoted. I would recommend him to anyone needing a pool re-plastering.

Description of Work
Re-plastering of entire pool and spa, plus some minor tile repair at the waterline.

They are very good. I like their work, but they don’t speak English.

Description of Work
I used Paramount Pool Plaster to replaster my pool.

Made an appointment for an estimate. Didn't show up and didn't bother to call. I called to find out if they were coming (45 minutes after appointment time) was told I'd be called back. Never received a follow-up call.

I was very pleased. I had gotten several other estimates from other vendors and they were much higher

Description of Work
Paramount Pool Service resurfaced the pool and spa at the Pleasanton development where I live. They submitted a bid for the work along with several other companies. They were successful in being awarded the project and completed the work satisfactorily in the promised timeframe at a competitive price. As a Board member of the HOA I can attest that the Board felt the work was completed to their satisfaction.

Nice company. Good crew. In an out in a flash. Did a good job and it looks like a new pool. Of course the proof is in the longevity of the job two to three years down the line but I was pleasantly surprised how neat and efficient the whole operation was.

They did an excellent job and the pool looks brand new again. The workers were knowledgeable and very quick. It was a total of 8 days of their work before we could put water back in the pool. Their customer service responses to my wife's questions were less than satisfactory but the actual work performed on site was good. They do need to get some better telephone help especially at these prices.

Description of Work
Remove and replace the pool coping and tile, and re-plaster the pool.

Jorge Galarza is the owner and did the work for us. They were very nice to me. I told them the pool measurements and got the price right away. I did feel that they price that was quoted was good. They other companies wanted up to 10000.00 to do the same work. We had five employees show up in a company truck to do the work. They did a good job of cleaning up the old plaster.

Description of Work
They did repair work on my pool.

We are Pool & Spa specialists, We provide Installation and remodel for in-ground pools, We offer; Full service Chemical service Chem-plus service, Installation of the newest pool equipment on the market Automation Pool Pumps Pool Filters Pool Cleaners Heaters Salt systems We specialize in; Energy efficient pool equipment that saves the customers up to 90% on electricity, We guarantee CRYSTAL CLEAR WATER in 7 days, We have 15 years experience, We are; CPO- certified pool operator, CPI- certified pool inspector, CAEI- certified aquatic equipment installers We will be happy to answer any questions you might have about your swimming pool  …

PARAMOUNT POOL PLASTER is currently rated 4.4 overall out of 5.

No, PARAMOUNT POOL PLASTER does not offer a senior discount.

Are there any services PARAMOUNT POOL PLASTER does not offer?