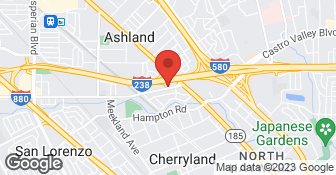 Family owned & operated. Cost is determined by the job. Additional contact name - Duane Fagan. Whether you’re moving an apartment, storage unit, or entire home; you’ll know you can rest with ease watching us handle your valuable items with expertise and care! We also provide “labor only” moves for such things as loading pods, shipping containers or just rearranging items in your home or inventory in your warehouse, in addition to single item delivery and pre-sale home staging

DO NOT HIRE THEM!!! I used Duane and his not-so-experienced crew a year ago moving from my condo in Oakland. I hired them to pack and load my belongings into PODs. It was a horrendous process. They underestimated everything from timing, to boxes, to how much would fit in the POD. I kept asking through the whole process if the POD was large enough, but it didn't seem so to me. And at the end, I had to scramble and get another pod because they left my most valuable stuff to the end so I had to 1/2 fill one and it cost me extra to store two pods. AND THEN DUANE WILL ASK YOU FOR CASH ONLY! The move cost me THREE TIMES what I was quoted. FAST FORWARD over a year later, I'm finally unpacking my PODS and it was THE WORST packing job ever, I just found a bag of TRASH, and a box of wire hangers. The crew needed so much managing that I could not monitor what was going into the storage and they kept asking me questions over and over. I had to call Duane multiple times to manage his team. I lost so much money and they treated me horribly during a very hard time. They overcharged me for boxes, and furniture pads that were taped terribly. DO NOT HIRE! AT ALL!

Description of Work
packing and moving

Working with Born Moving was a total disaster. The two moving guys didn't seem to know what they were doing, despite the written instructions on the Born Moving invoice indicating that they would pack appropriately for a long distance haul, and despite the fact that 3 times Karen from Born Moving assured me that her "guys" knew how to pack for long distance hauls. When the cube arrived in Santa Fe, I hired professional movers from Santa Fe to unload the cube, and they informed me that the packing had been done wrong. Heavy furniture was placed ontop of cardboard boxes, and the boxes were crushed. One original piece of ceramic art was destroyed, and the Born Moving guys, had packed the MId Century Modern Danish Dining Chairs without any cardboard bewteen the legs of the chairs and each item they had the legs of the chairs touching. Upholstery was torn, and the wooden backs of 2 irreplaceable Mid Century Modern dressers were punched completely through. There were also chips in the fronts of the dresser drawers. Upon seeing the damage, I immediately called Born Moving, requesting a call back, and they didn't call me back, I had to keep calling them until Karen from Born Moving finally answered 4 days later. She promised to have the owner Duane Fagan call me back, and he never did. I have had over 5 conversations with Duane on the phone, and he absolutely refuses to acknowledge his fault/ and or liability in this issue. He continues to simply hang up the phone on me in the middle of a conversation, rather than address the issue in a professional manner. Duane Fagan has the worst Customer Service policy I have ever encountered. He is the most immature and unprofessional Man I have ever dealt with.

Description of Work
Born Moving was supposed to move items from one location in Oakland to another location in Oakland and then at the second location they were supposed to pack all items appropriately and safely in preparation for a long distance haul in a re-lo cube that was picked up by a different business and moved to Santa Fe New Mexico.

(Member name removed) uses profanity when upset. If she mentioned Duane hung up on her, it would have only been due to the fact that I refuse to be cursed at, especially when I was trying to listen and understand her concern. We took this job as a favor. She needed help only loading a storage container for a long haul. The morning of the job, my two laborers arrived on time to the load location. The customer’s sister advised the movers they needed to pick up things from another home, bring them back and load those items as well. One of our movers drove back to the shop, picked up a moving truck, and returned. The laborers, who load many trucks a month, loaded the relo cube in about three hours. This relo cube traveled over 1,100 miles and took over 5 days to reach its final destination. That relo cube must have passed through many agricultural check points and could have been exposed to a number of other inspections. Machines and/or trains also move those cubes around with heavy machinery. This cube was definitely handled a lot before it finally reached the customer. I understand (member name removed) wants to be reimbursed the cost of her damages and her fees paid to Born Moving. We simply cannot be held responsible for someone’s belongings if it is not in our possession and/or we did not move it. The customer’s sister watched men pack the relo cube and nothing was mentioned about the manner in which it was loaded then. (Member name removed)’s things must have been tossed about in its mode of transportation or moved around during an inspection of some sort. My moving insurance doesn’t cover her damaged items since we didn’t transport or move anything. I already gave (member name removed) discounted fees and did not charge her for the use of the truck at the last minute. I feel I have been more than fair. I cannot seem to make this customer happy, as she is so inconsolable and even threatening. I understand she is convinced I am the cause of her damage, which I know I am not. I wish this had a better ending.
5.0

Best move ever and we have plenty of experience. This move was arranged well ahead of time from another state. When we got to the apartment for the move, we had two days to pack. We got a call from Born Moving on Monday to confirm the Wednesday move. They called again on Tuesday to ask how many wardrobe boxes we needed. That's right, they provided the wardrobe boxes free-of-charge! On the move day, the three-man team arrived early, but not too early. They started to work moving the boxes out, wrapping the furniture and loading their truck. They never stopped and their system was efficient. We traveled up to the new address and they unpacked, reassembling the bed and a few furniture pieces in record time. I would use them again and again. They were organized, efficient and pleasant. Their equipment was well-maintained, their truck was huge compared to our move which didn't fill more than a third of the truck.

Description of Work
They came to our apartment, loaded all furniture and packed boxes into truck. Then they unloaded and placed all materials where we asked.

Very well, they arrived early, from the original time.

Description of Work
Move from SF to Oakland

The gentlemen who moved the furniture were timely and polite. All went well except that one metal bed support piece was lost in transit. Fortunately, it was not a crucial component to reassembling the bed!

They are really good. I have actually used them 2 or more times before this. They are always on time. They are always cheaper than their estimate. They are just really careful. Everything is very straight forward with them and its very easy to move with them.

Description of Work
I used Born Moving for moving from my apartment to my current house during first week of March.

We pride ourselves on being the most reliable moving service in the Bay Area. Moving can be stressful, we make it our mission to put your mind at ease so you can enjoy your new home! Over 25 years of experience, call us to make sure you are turning to the right people! Residential and Commercial Moving Service, Local and Long Distant Moves, Packing and Unpacking Service, Loading and Unloading, Piano Moving and Junk Hauling Services available. http://bayareasbestrelocationservices.com/  …

We are a new company but not new to the business, with 5+ years combined experience in the industry. We will handle the stress of your move and assist in safely packing, loading, and delivering your belongings. Our small but expanding team is dedicated to being on time and keeping you in the loop during every step! MOVING WITH CARE We provide all of the necessary materials and equipment to safely transport your belongings and furniture. We take extreme caution in being safe and following current COVID guidelines. Licensed, Bonded & Insured USDOT #3613619 CAL-T #0192397 CA #585110  …

Jay's Small Moves is a Full-Service Licensed and Insured residential Moving Company established in 2007. We can move any size home or apartment. San Francisco / Oakland Bay Area wide, we're ready to take the stress out of your move and to give you the peace of mind you want from a moving company. We integrate old fashion service, hard work, tradesman skill, fair pricing and integrity into one cohesive package. We are listed with the Better Business Bureau, a good standing member of the California Moving and Storage Association and friends of the CHP. We also have exceptional reviews on Yelp. We offer competitive rates with no hidden fees. Visit us at jaymoves.com or call us today for an immediate booking.  …

How is Born Moving overall rated?

Born Moving is currently rated 4.2 overall out of 5.

No, Born Moving does not offer eco-friendly accreditations.

No, Born Moving does not offer a senior discount.

Are warranties offered by Born Moving?

No, Born Moving does not offer warranties.

What services does Born Moving offer?