With Angi since September 2018 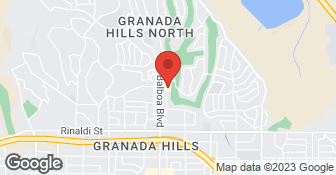 We are a 3rd generation family of painter's who are excited to pass on our knowledge on a daily basis. We are the People's Painters. The painter's you can TRUST!! Quality work at a convenient price! A fresh coat of paint, or stain, can bring new life to rooms, add curb appeal to homes and commercial buildings, and help protect your investment for years to come. We provide a 3 year warranty to all our work completed with an available 5 year warranty. We are happy to bid on all types of painting, staining, and interior design projects in the Los Angeles area. We will meet you, at your convenience, and provide you with a free, written, detailed estimate. We ask the questions to ensure you get the exact product you were looking for. No surprise charges! The smoothest and easiest painting experience you will encounter

Save yourself the headache and money and don’t hire Greg or Van Gogh Pros. Before we even talk about the poor quality job that required many fixes, let’s start with Greg miscalculating the balance of our invoice and over-charged us $1000. We caught the mistake a couple days after we wrote the last check. He finally acknowledged his mistake and asked us what phone number to Zelle the money to, then crickets. We’ve gone back and forth for WEEKS, the latest was he’s going to drop off the check, and again crickets. Greg is a con-man. I know he is going to claim he didn't know he received the money because he's not familiar with Zelle (a lie), or that the money went to his personal account and not his business account (another lie since we sent the money to the phone number he gave us), or that the check must have been lost in the mail (we NEVER said to mail a check). We are now suing him for the $1000 he owes us. The job was painting the full interior of our 1100sq ft home. The “finished” job included paint smeared on the window glass that needed to be scraped off, painted over stickers on the wall, missed spots, paint specks all over our hardwood floors, and the worst was they completely scratched our newly refinished hardwood floors in the bedroom from moving the bed. They tried to say we made the scratches even though we’ve lived in this house for 6 months and the heavy wood bed was constructed in the room and hadn’t moved a centimeter since then. There was routinely ONE worker in our house alone, and we saw the bed moved multiple times, meaning he tried to move a solid wood king sized bed himself. He used furniture movers meant for carpet (the hard plastic kind) so of course the floor was scratched. Greg admitted the mistake and buffed out the floors. This has been the worst experience with a contractor we’ve had while renovating our house. Also the only two positive google reviews are from Greg the owner and his wife, go figure. Let’s see what ridiculous rebuttal he posts on here.

Very discerning that you continue to post inaccurate sequence of events. Thank you for the feedback much appreciated.
5.0

Preparation of the wood for painting revealed some termite damaged parts. The additional cost to replace these pieces was reasonable. The Van Gogh Pros crew arrived on time, worked diligently, and finished ahead of schedule.

Description of Work
Painting of exterior trim on house.

They were pro’s appreciated there work ethic and attention to detail.

Poorly. We hired Greg Riggen and Van Gogh Pros., Inc. in mid-September 2019 to paint our house. Prior to engaging Van Gogh, Greg came to our home twice, and met with my wife and me. He showed us specific shortcomings with the previous paint job and also showed us specific gaps in the exterior that needed to be sealed. With change orders, we paid nearly $20,000 for the job. The work that we hired Van Gogh to do was comprehensive. It included all prep and exterior paint of our house and detached garage. The itemization of work goes for about three pages and included (in addition to prep and paint): • Professional preparation, including wood spot repair and sealing. • Window frames, including scraping, sanding, caulking and painting. • Treating walkways, including power wash, prep and sealing with polyurethane concrete sealer • Painting porch, including removal of loose paint, spot priming, and caulking edges and gaps. According to the contract, “All work completed is backed by industry leading 3yr warranty.” Van Gogh began the project in early-October and was completed in early-November. At first glance, everything seemed fine. Our house is quite tall and many parts of the exterior are not immediately visible without a ladder. After Van Gogh finished up, we commenced the next project, namely having an exterminator look for possible rodent ingress. The exterminator pointed to several areas that had not been “sealed,” caulked, painted, or even cleaned up. In once space, a rodent had gnawed through a wooden slat and gained access to our attic. Van Gogh had simply painted over. In fact, we found a big pile of chicken wire (used behind lattice work to prevent rodent ingress) that had been tossed among various debris by Van Gogh. In addition, after the first rain of the season, the paint on the walkway (supposed “sealed”) began to peel off. We also experienced major water intrusion through gaps in the porch. Finally, several window frames were either not completed or missed altogether. We made every possible effort to allow Greg/Van Gogh to remedy this work. My wife and I have sent countless text messages (including photos) and left numerous voicemails in the last three months, both to Greg and to the foreman. For the most part, Van Gogh has ignored our messages. However, Greg and the foreman have occasionally said that someone would come out and address the issues. Then they have set dates (always vague as to the time) and, for the most part, not shown up. The foreman has come out twice now (both times with an excuse about why no one could come sooner or come on the agreed-upon date), walked around the property, acknowledged the problems, and said that they would complete the job. But then no follow up. The last we heard from Van Gogh was on the morning of January 18. 2020. Out of the blue, the foreman called and asked if he could come by that morning. My wife and I had plans, so he said he would come by on January 20 to finish the work. No one ever called or showed up. I have hired someone to do some repairs, and done some myself, but there is still quite a bit that needs to be done. And it is absolutely ridiculous for me to be doing any remedial work after paying $20k to this outfit.

Dear Mr Piestrup, We truly appreciate the stern criticism, and we sincerely apologize that you have yet to been satisfied. We can only provide advice on rodent deterrents, but they are a bit out of our scope of work. We have received your thoughts, and attempted to resolve your concerns on multiple occasions. We would like to thank you for the business and good luck to you in the future. Respectively Van Gogh Pros
5.0

Van Gogh Pros were excellent! They were here when they said and very professional and did such a great job I still drive by my house just to look at. Everything was done meticulously and precise. They cleaned up after and made sure to pick up any nails from the old roof. I would highly recommend them.

Description of Work
Needed some interior painting for my apartment and couldn't be happier. I did it once myself and I like Greg's job WAY better! Haha

Thank you [Member Name Removed]. I really appreciate the kind words. Looking forward to working with you again in the near future.
5.0

Excellent. Everything from patching to color selection to painting and clean up was done professionally. Would definitely hire again.

Thank you [Member Name Removed]. We strive to ensure complete satisfaction and it is always a nice feel good moment when we get those very results.
5.0

We hired Van Gogh Pros, Inc for installation of a new window, moved electrical around, Trim painting and stuccoing over our existing brown coat. Excellent work. Excellent workers. Recommend them highly. Jesus was our window installer and is an excellent carpenter. Saul is a master stucco man, and took the time to help us figure out texture and color. He nailed it and we are very happy. Plan on hiring this company for more wood work.

They did a great job and finished early.

Description of Work
They painted the living room, outside of the patio doors and a bathroom.

They were kind, on time, did great work and great to have around.

Description of Work
They painted my whole apartment.

KL Painting is a small company with 10 years of experience, our focus in providing the best quality in service of painting in interior exterior cabinets finished and remodeling  …

Van Gogh Pros inc is currently rated 4.3 overall out of 5.

No, Van Gogh Pros inc does not offer eco-friendly accreditations.

No, Van Gogh Pros inc does not offer a senior discount.