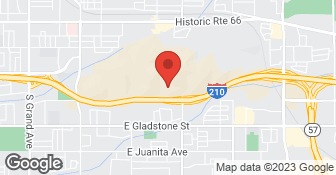 Hart Laboratory, Inc. has provided environmental consulting services to the Los Angeles,Orange and Ventura County areas for 22 years. All inspectors are OSHA Certified and ACAC Certified....

Erin was very friendly and professional when we first met. She had contractors show up unannounced. Luckily I was there and could let them in. I have immaculate wood floors and when I returned there was a big blotch of discoloration on the floor which would not come off with rubbing or hardwood floor cleaner. Erin said that they covered the floors and showed me a picture, but obviously beforehand or in the clean up something happened. About a week later when we tried to clean it again, we were able to gently scrape it off. I still have a mark but it is not as noticeable thank goodness. Her email responses were very defensive and she would not entertain the idea that it was the worker's fault. I live in a condo and the HOA was paying for the mold removal but as I am the owner of the unit who had the mushroom growing in my ceiling, I requested to have a copy of the report stating the type of mold and what was done to remove the mold. I have asked four times now and have not received this information. It is important to have for obvious reasons. Once Erin got the job, her response rate went down to almost zero. I gave her a D as I have no idea if she took care of the situation correctly as I have no report.

Description of Work
Mold needed to be removed from the attic space above my ceiling.

Description of Work
Can't get any written reports, even though we have paid. No response so far after several months of trying.

Quality Service You Can Count On! If you are experiencing water damage, mold or fire damage problems, or simply are just looking to remodel your kitchen or bathroom, Pure Restoration can help you! Our experts are highly knowledgeable with mold testing, structural restoration & remediation, including reconstruction for water damage or fire damage, water extraction and services. Pure can deal with virtually any project and takes pride in leaving our customers satisfied! We offer FREE inspections and estimates for your residential home or commercial property. With over 20 years of experience in the industry, Pure Restoration delivers advanced and reliable professional restoration services including mold inspections and testing throughout Los Angeles.  …

All Clear Environmental is Southern California's one-stop solution for asbestos removal, lead abatement and mold remediation. Our team of licensed professionals has over 100 years of combined experience in the thorough, discrete and environmentally responsible removal of hazardous materials. If you think that your property may be at risk for containing asbestos, lead or mold, we can provide you with the most cost-effective solution. And you can be sure that when we're finished, it will be All Clear.  …

Gain peace of mind with one of our specialists! Whether you are buying, selling, or staying in place, we have the right inspector to suit the job. In addition to home inspections, we offer inspections for sewer line, pool and spa, mold, home hardening, and more. Our baseline is the InterNACHI Standards of Practice and we frequently go above and beyond that standard. We will take our time to make sure our clients understand what our findings are, why they're important, and what our clients can do to monitor or correct the situation. Give us a call for peace of mind today!  …

Insured
All statements concerning insurance, licenses, and bonds are informational only, and are self-reported. Since insurance, licenses and bonds can expire and can be cancelled, homeowners should always check such information for themselves.To find more licensing information for your state, visit our Find Licensing Requirements page.
General Information
Free Estimates
Ask for Details
Eco-Friendly Accreditations
No
Payment Options
Visa, Check
Senior Discount
10%
Warranties
Yes

Hart Environmental, Inc. is currently rated 2 overall out of 5.

No, Hart Environmental, Inc. does not offer eco-friendly accreditations.

No, Hart Environmental, Inc. does not offer a senior discount.