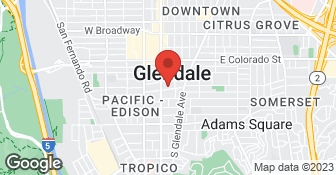 OWNER-OPERATED. SUBS USED FOR EXTRA LABOR. COST DETERMINED BY THE JOB. NO TRAVEL CHARGES. NO EXTRA CHARGE FOR AFTER HOUR SERVICES. MAY CONTACT THROUGH EMAIL....

Sealing the travertine floor: As I write this I'm having a floor specialist completely redo the floor. The problem is that Americo applied the sealant and let it dry, but didn't remove/buff the excess so that it resulted in splotching and inconsistent sealing (very noticeable in the sunlight). I purchased a sealant for him (Duro Shine 646 water-based from another store) and was assured by him that he knew what he was doing. The result was as I described. Americo thinks the sealant was a poor choice but both that store and the guy who is now correcting his mistakes think otherwise (the guy working now is actually using the same product Americo used to fix the problems). It's not really possible to photograph this problem. Fixing the exterior fence: The trash pick-up smashed the green bin into the fence (3 boards) and also scraped a mark across 2 other boards. Americo's fort is actually painting so I thought using him to get a good match to the rest of the fence would be perfect (he has done a lot of our interior painting in the past and it turned out well). In this case, because of the floor fiasco, I emphasized the importance of getting the wood to match (the 3 replacement boards and the scrape on the other 2). When he put the stain on and showed me (before the boards were put in) it looked like a good match and then I had to leave for the day. Unfortunately, once the varnish was applied and the scrape was "fixed," it was far more *green* than the fence, which is essentially red (see photo). Like the floor, once he was done, it looked horrible. When I pointed out the obvious discrepancy he had me standing at a certain angle (rather than standing in front of it) where you couldn't notice it, which is a lot like a suit salesman holding in your jacket as you stand in the mirror telling you how good you look. Fixing the stairs: He sealed the stairs that had split because the staircase itself is not completely true, so the stair boards have never sat flush on the risers. I just lived with that because the stairs are solid and the location is over a steep hill. Unfortunately, I was not able to address the problem with him on this repair. He only put stain where he put the sealer so the rest of each board has fresh stain and old stain (see photo). With Americo, now, there just always seems to be some reason why what he's done is acceptable and why it can't be fixed to the standard we'd agreed on. He'll say yes to anything, but it's clear he's no longer willing to correct the problem to my satisfaction. Part of the original deal was to spot paint interiors for scratches and marks (for an original $600 for everything) but this just went south when I demanded the fence repairs match the existing finish and he refused. I'm paying the floor professional $250 to fix Americo's work. The final cost was lower than the estimate because I basically terminated his work before he finished what he estimated.

Description of Work
I originally submitted Americo to Angie's List with a key proviso that he does good work but needed to have his work checked and that he was willing to make it right when the specific result wasn't up to par. Recently I had him back for 3 things: resealing a travertine floor, repairing an exterior fence and sealing some cracks on an exterior wooden staircase (one that he built a couple of years ago).

Firstly, he got lost coming to my home and was 25 minutes late. Also, I felt the prices were too high. He was very personable, however.

Description of Work
They gave me an estimate on painting my kitchen. ($2,050.00)

Americo is good natured, and understands the basics of good service. His carpentry service relies on "sub-contractors" for the work and the tools [guys who don't speak English and that have other jobs they are in a hurry to get to], though he was there for the job. It is far, far from fine carpentry. It's almost framing with Americo throwing stain and varnish. But the key thing is that I had to be there, right next to them, practically the whole time to correct errors like: covering up the power outlets with a shelf, having shelves that matched in height, closing gaps between shelves and partitions, on and on... Americo is a painter by trade formation. He has been here since the mid-70's, but his English is far from fluent. Americo works on a cash basis. So you have to be prepared to get to the bank each time you pay him [advance, materials, etc.], and he doesn't provide receipts. Americo wants very much to do a good job, but lacks the training to do so in carpentry.

Description of Work
Carpentry work involved restructuring a closet space and an empty space next to it to create a media center. The concept had been fully developed; we were looking for execution.

He was very accommodating and quick to respond. He was flexible in scheduling an appointment to see the space that needed to be painted, and gave me a fair estimate. He did the work the very next day, and the work he did was excellent.

We specialize in interior and exterior painting services, staining, cabinet painting, wallpaper, stucco, window cleaning, drywall, roofing, plumbing and more! We guarantee your satisfaction, and we won’t leave until the job is done right. We pride ourselves on the quality work we provide, while delivering great customer service! Call -or- click to schedule a free estimate today!  …

All statements concerning insurance, licenses, and bonds are informational only, and are self-reported. Since insurance, licenses and bonds can expire and can be cancelled, homeowners should always check such information for themselves.To find more licensing information for your state, visit our Find Licensing Requirements page.
General Information
Free Estimates
Yes
Eco-Friendly Accreditations
No
Payment Options
Check
Senior Discount
15%
Emergency Service
Yes
Warranties
Ask for details

How is AMERICO MARTINEZ overall rated?

AMERICO MARTINEZ is currently rated 3 overall out of 5.

What days are AMERICO MARTINEZ open?

No, AMERICO MARTINEZ does not offer eco-friendly accreditations.

No, AMERICO MARTINEZ does not offer a senior discount.

Are warranties offered by AMERICO MARTINEZ?

No, AMERICO MARTINEZ does not offer warranties.

What services does AMERICO MARTINEZ offer?