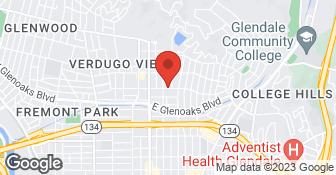 AirFresh Duct Cleaning Company - AirFresh was established by“Big”Dave McConnell and Brett Lemos in 1999 with CSLB Lic# 982685, formerly named ”ClearAir”. One of the things our company does is IAQ (INDUSTRIAL AIR QUALITY) Handling air quality issues in industrial, commercial and residential properties. With 11 to 99 million bacteria — in every ounce of carpet dirt — it’s no wonder that breathing problems are so commonplace in children and adults. A United States Environmental Protection Agency (EPA) 5-year study found levels of toxic pollutants are 200X higher inside buildings than outdoors....

Called Brett to clean our dryer vent. He came the next day on time (early, actually), and did a great job of clearing out our dryer vent. He also cleaned the area afterward. Price was very reasonable. Would definitely use him again.

Moved into the second floor of a three story condo on Wilshire in Hancock Park area. Bought a new dryer and it didn't work. Called Best Buy and they sent a new one. Discovered it wasn't the dryer but the clogged vent. I stuck my hand in and pulled out a small sheep. Still didn't work. I called four or five companies and they all gave me an estimate for $250. But Brett charged half the price. He came out and discovered that the vent probably hadn't been cleaned in 20 years. He worked for about an hour and I witnessed all the junk that came out from the bottom and on the roof. Now, the dryer works and I'm happy. Thanks Brett for not ripping me off, upselling or making it complicated.

Description of Work
Snaked, vacuumed and cleaned my dryer vent.

Brett came and cleaned out 13 of our vents, and replaced a filter in our second story wall. He did a great job. I never had vents cleaned before and he educated me on when and where all our vents are. I would recommend his services. He's professional and was on time.

Description of Work
Cleaned out 13 vents in our two-story house.

Right from the beginning there was a big red flag. I checked on-line with the California State Contractor Licensing people using the contractor's license provided in their Angie's List listing. Their state license is CANCELLED. I will not use them! It is unconscionable their ad on Angie's List gives a California State Contractor's license number when they do not have one. Dishonest!

No work done for this member. Angies List had old license number,,which had been changed to cslb #982685. Old license was never in bad standing ,changed due to cslb corporate policies when corp oration is changed.

Very well Bret came on time, did a great job. Left the house as cleaner than they found it.

He was on time, not too chatty, worked hard at job.

Description of Work
Cleans gutters once a year in september.

It had been about 6 years since our 4500 square foot home has had its ducts cleaned so we thought it was about time. We chose Air Fresh based on the positive reports from Angie's List as well as the relatively close proximity to our home. It is always difficult to spend a large amount of money without a personal referral, but we decided to trust the Angie's List members on this one and we're glad we did. Brett was really upfront on the phone with regard to pricing and what the service entailed. He said it was going to be $45 per each vent and that included the HVAC units (plural). As it turned out, they were right on the money and Brett even inspected our dryer vent and said it did not need to be cleaned! Air Fresh arrived right on time. There were 3 workers in total and all of them were so nice and so polite. I found them to be extremely professional and considering the insane level of dirt that was found in our vents, it is amazing that when those guys left there was not a trace of that dirt left in my home. They protected all of our furniture, all vets were replaced with precision and when they left, there was no trace that anyone had been here. Air Fresh replaced our filters and they provided me with a full report of our system. This was quite a production! There was big hosing that was placed through my home and everything was covered in plastic. These boys went right to work at 10:30 and they finished at 4:30 which was exactly what Brett had said. The final charges were exactly as he stated as well (16 vents at $45 a vent). Absolutely I will be using these guys again and I would highly recommend them to anyone else. Their level of service was outstanding and I have to say, the house feels SO much cleaner! We live in a very dusty area so I thought naturally the level of dust in the home was something we just had to live with but WOW what a difference the duct cleaning has made! Not only is there a LOT LESS dust, but my air conditioner has been working much better which is going to save on my electric bill.

Description of Work
Complete cleaning of all air ducts and HVAC system.

Cleaned the Vent outlet panels and cleaned the duct from the roof down to the kitchen.

Description of Work
Cleaned the kitchen exhust fan and duct from the basement kitchen and to the roof. Service was prompt and followed the work schedule. Cost of work was higher than the estimate of initial call due the distance between the kitchen and the roof. Some work included in the proposal was not necessary but there was no adjustment.

Description of Work
They cleaned the gutters and downspouts.

Brent and Peter performed an amazing job and got every vent amazingly clean. Well worth the service.

Description of Work
Air Duct cleaning and sanitation plus removal of one dead rodent.

I was pleased with their efforts and would recommend their services.

Description of Work
They performed a dryer duct cleaning.

They scheduled me promptly. Person who came out was friendly and professional. I received a proposal that made sense and was about the same price as a 2nd bid I received. The other company that bid it seemed sloppy and indifferent, but Airfresh guys actually seem to be "on a mission", so I preferred hiring someone who seemed to give a d*** about my project and seemed interested in it. I approved the work, they scheduled a time I was agreeable to, arrived within a couple minutes of the time they said they would (that alone was pleasing) and got the work done in a professional and hard-working manner. The workers were friendly and polite and cared about protecting my hardwood floors and the plants under the gutters too.

Description of Work
Did extensive gutter cleaning and a few minor points of repair on the gutters, cleaned air conditioner ducts on a small-ish AC system.

Our mission is to be a provider that brings back the personal touch with our customers. We will build a relationship that will last a lifetime after you see our quality work. As a locally owned and operated business we feel invested in our clients and constantly strive for customer satisfaction. We won't leave until the job is done right! Call or click to schedule an estimate today! Additional phone #: 213.464.7463  …

We offer the highest level of detailed window cleaning (inside and out), gutter cleaning, and pressure washing. We are a family-owned company that to date has had 100% satisfied customer satisfaction. We have been in business for over 2 years and are expanding into new territories over the summer!  …

We would prefer a call or text for the fastest service. Thank you!!! **Please call and text Pat at 323.314.7837 if you're interested in service. He answers all inquiries very quickly.** Specializing in all aspects of rain gutters and rain gutter maintenance, Bresnahan Rain Gutter Cleaning has valuable experience dealing with common rain gutter problems, such as unwanted water drips, standing water, water that overshoots the gutters, gutters that pull loose from the roof and debris trapped in gutters. We offer a wide range of gutter services, such as aluminum gutter installation, custom gutter installation, gutter cleaning, gutter maintenance and gutter repair and top-notch Commercial rain gutter cleaning. We also provide window washing and window cleaning services. Additional website: https://cleanraingutter.com/ For fastest scheduling please call or text Pat at (323) 314-7837.  …

How is Airfresh Cleaning overall rated?

Airfresh Cleaning is currently rated 4.8 overall out of 5.

What days are Airfresh Cleaning open?

No, Airfresh Cleaning does not offer eco-friendly accreditations.

Are warranties offered by Airfresh Cleaning?

No, Airfresh Cleaning does not offer warranties.

What services does Airfresh Cleaning offer?