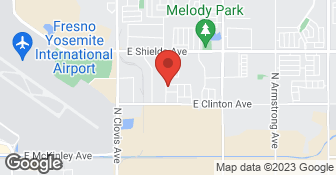 LIC #814291 We are a general contractor in business for 23 years. We use subcontractors for some trades. We have 12 employees. We do many trades inhouse to minimize cost to you.We have restored hundreds of homes and installed many small service type jobs from doors to waterheaters to roofs. We also specialize in Log Cabins. Logs brought in from Canada. Large Sitka Spruce logs are used. We can compete with any legitimate contractor in the area. Thankyou for considering AllAmerican Const. Borges BrosInc....

Whether you need a new air conditioner installed or a current air conditioning unit repaired, Balanced Comfort offers the best value for your AC‌ needs. Our quality service goes beyond just installing a new AC unit or fixing an existing one. We take a comprehensive approach by looking at all factors in your home or building, including ductwork, insulation, windows and other efficiency upgrades. This helps us come up with the best solution to fit your individual air conditioning needs. We are a growing company due to increasing demand for our services. We provide all types of insulation services, energy audits for residential and commercial buildings in addition to our Mechanical, Electrical, Plumbing and Fire Protection Design.  …

Providing honest service & repairs, and installing Energy Star systems. Since we started in 2005, Brian's Heating & Cooling, Inc. has been servicing the Madera, CA area with the highest quality Heating and Cooling services. We strive to raise the bar for residential, commercial, and industrial HVAC services, and for Over 15 years, we’ve been doing just that! With a BBB A+ rating and accreditation, Energy Star Certification, Dealer Awards, Angie’s List Super Service Awards, and more, our dedication to your satisfaction has proven successful! From heating and cooling to indoor air quality, our friendly staff and expert technicians settle for nothing less than high standards in all that we do. For family-owned and operated, honest, and dependable services, count on Brian's Heating & Cooling, Inc.!  …

They were very professional and thorough. They did diagrams and drawings to give us an idea regarding what could be done, the cost, so on and so forth.

Description of Work
We got an estimate from All American Construction Company a couple of months ago for kitchen remodeling.

Thankyou for the project and for the honest review. It was a pleasure working with you. Crew at All American says Thankyou!
1.0

I have a complaint with the California State License Court against them. They really had no clue at all on how to put the roof on. They thought that it was going to be a training experience, they did not follow the codes and one other thing that they did was really wrong was they tried to put the roof on three times and they put on fifteen pound cells instead of three pound cells under the dial, which was not as per the codes. They told me that this was going to be a three-week job, they started on June 15, and they finished on September 7th. The contract was for $35000 and I paid them $24000. The price was not good either. I am not at all satisfied with the quality of work.

Description of Work
We used All American Construction to do my roof.

We apoligize for this bad review. This was not a training experience this is an old building with original tile removed and reinstalled and it comes with a very high degree of difficulty. We never intended to abandone the project and would have made all and any correctios to resolve if we were givin the chance. We installed # 15 felt over the cap base and a #30 felt in place. The entire roof was felted with new #30 base. Permits were pulled and All inspections were made and passed thru this process. We did make mistake with orders on the clay tile not relizing that it would take several weeks to bring the tile to site due to fact that it would end up having to be cast special for the project and curing time needed before delivering. We are trully sorry that we have a dissatisfied client and hope she will come to terms and allow us to correct the problems soon.
5.0

Both their communication and their work was absolutely the best I have seen. A lot of it was covered by insurance and we spend $1000. They were very considerate all the way around since they did the whole job. We shopped around and we looked for other possibilities but this worked out the best. The completeness of what they did was great because if we needed something like the flooring and we had to pick out the tiles, they gave us specifics and what exactly we needed to look for so there was good guidance there. But just the fact that they were very professional in what they did and they cleaned up after themselves was outstanding because some workmen don’t.

Description of Work
We used All American Construction Co to repair a major leak on our roof, repair the front entry and utility room. They had to rebuild one of the cabinets, re-do the floor and part of the wall.

THE SALESMAN HAD COME OUT AND DISCUSSED ALL THE OPTIONS THAT WERE AVAILABLE TO US AND WHICH WOULD BE MOST RELIABLE. THE WORKERS THEN SHOWED UP ON TIME AND DID A QUALITY JOB.

Description of Work
I HAD ONE LAYER OF SHINGLES REMOVED AND A NEW LAYER PUT ON.

Thankyou for the honest review and for your business. Entire crew at All American Const says thank you!