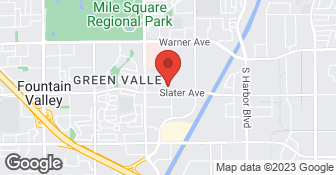 Backyard Golf & Games Inc is a fully licensed, bonded, and insured supplier and installer of synthetic putting greens and lawns. We have over 10 years experience and offer personalized service in providing synthetic grass, putting greens, lawn installation, lawn turf, putting green installation, and sport court installation in Santa Ana, San Clemente, Newport Beach, Santa Margarita, Anaheim, Orange, and surrounds. We’ll work with you to develop a unique design for your personal putting green. We do this by turning undesired and unused areas into beautiful showpieces to provide hours of family entertainment

Every time I look at my lawn and see the lines it it, I get angry. At the time I made the purchase from Christ, he touted that his lawns did not have lines in them - something I brought to his attention on other lawns. He promised me I would not have lines. His service people did use the zigzag installation process on the seam between the two rows of turf but just butted the other pieces together. When I complained and asked for him to remove the lines that are obvious, he had the audacity to say manybe a hose was lain across the turf to cause these lines. We have know Chris for years and I cannot tell you how dissapointed I am in his installation and service. Barbara Steensland

Great company! Their bid was similar to other quotes I received. They did exactly what they said they would do. Very professional installation done exactly when they said they would arrive to do the work. They cleaned everything after they were done such that you would not know they were ever here. I never have had a contractor that cleaned up that well. Chris Johnson was the representative of the company that oversaw the work. He was very easy to work with on this project.

Description of Work
Installation of a green and bunker. Outstanding result.

BGGI was very responsive, most competitive and highly professional in quoting and performing this project. BGGI is a reseller and installer of the Tiger Turf brand of synthetic turf for both lawns and putting greens. To do so, BGGI provides all necessary landscaping and excavation work as well as ancillary landscaping services. I put BGGI and three other vendors representing all three major manufacturers of synthetic turf through an extended competitive bidding process like I used to conduct in the high tech industry before retiring. Through initial site discussions with each firm, I drew on the best suggestions of each to develop a comprehensive and detailed Statement of Work (SOW). Additionally, I viewed prior installations by each firm, often speaking with the owners. The SOW became the common basis for a final bid by each firm. Two of the firms were fully responsive and of those BGGI was the lowest bidder by $700. Additionally, BGGI was most persuasive of its commitment to satisfy me. This major project started May 6, 2013 with about 10 men that day to do the necessary excavation work and then continued to completion with 3-4 men per day for about 6 more days. All the work was highly organized. The workers were very experienced and conscientious. (Many have worked for BGGI for an extended number of years.) Whenever a question arose in their minds, I was asked what I wanted and if I was satisfied. Detailed choices to be made were always explained for my decision. Any question or concern I had was immediately answered or resolved. Additional landscaping services included digging and constructing a concealed, gravel pit and quot;French drainand quot; under a contoured low spot of the lawn, selective removal of shrubs (some quite large), stripping of banks in the front and back yards for my later replanting, transplanting certain shrubs, extensive reconfiguration of underground sprinkler systems to eliminate watering of the new lawn while irrigating shrubs, trees and banks, and emplacing about 4.5 cubic yards (i.e., a lot) of decorative and quot;California Goldand quot; crushed stone throughout all the shrub and tree areas. The project was completed per the contract referenced SOW to my total satisfaction. The results are spectacular. I have received numerous compliments from neighbors and total strangers. Several have asked for BGGI contact information. An interesting situation arose about 5 weeks after the project was completed. The 35-year old main water line from the street to my house broke, causing a massive water leak and minor flood in my front yard. This break had nothing to do with BGGI's prior work. The water line is deeper than any excavation by BGGI, and the break occurred under a shrub area next to the house where BGGi did no work other than to spread crushed stones on the ground surface. Fortunately, I caught the leak within a couple of hours of its occurrence and shut off the water supply at the streetside meter. BGGI quickly came out and verifed that no sprinkler system lines were involved. They then cooperated fully with the plumber replacing the pipe. BGGI peeled back the turf per the needs of the plumber and a few days after the plumber was done, returned to reinstall the turf as good as new. The initial peel back took 2 men a quarter hour to do. The reinstallation took 4 men two hours to complete. Now there is no evidence that anything happened. I believe this highlights an advantage of synthetic turf over live turf.

My experience with Backyard Golf and Games Inc. throughout the quote process has been very good. They explained everything well, so we knew what we were going to get if we went ahead with the job. He was on time for our appointment and professional about everything. They're very cordial and very nice.

Description of Work
They gave us a quote for installing a putting green in my backyard. We're not sure if we're going to go ahead with the project at all.

I really liked the guys and everything. It is just that we were trying to get a competitive quote, and they were competitive, but by the time we thought about it if we wanted to spend $13,000 on fake turf on one part of the yard. My wife and I answered no. We don't. We have nothing against the guy, but it is just that it is not the money we were willing to spend on one area. The guy from the other service provider at least gave me a drawing about estimates in this and that, and they did not really do that.

Description of Work
I got a quote from Backyard Golf & Games Inc. for an artificial turf with a putting green in the middle.

Description of Work
They put it in synthetic grass putting green.

Thanks so much for your review--we're happy to hear that you were pleased with your new putting green and hope to work with you again in the future!

Black Diamond has been family owned & operated since 2004 with local offices in San Jose, Novato, San Mateo, San Ramon, Santa Cruz, Carmel, Sacramento, and Thousand Oaks. With an exemplary reputation of being the leader in paver stone and landscape design & installation throughout California, our company's ultimate goal is to provide an exceptional client experience. Our family of experts will create your custom Dreamscape with a commitment to professionalism, quality, value, and customer service. We work with "Experts Only" to achieve 100% customer satisfaction by offering the highest quality work, including a 27 year warranty on paver installation & a lifetime warranty on paver stones.  …

Family Roots Landscaping is a family owned business. Luis Sr. started the business in 1996 focusing mainly on landscape maintenance. Over the years we have broadened our work knowledge to cover most of your landscape needs. In 2011 Luis Jr. took over the business and continues to grow. We pride ourselves in honesty and integrity.  …

All statements concerning insurance, licenses, and bonds are informational only, and are self-reported. Since insurance, licenses and bonds can expire and can be cancelled, homeowners should always check such information for themselves.To find more licensing information for your state, visit our Find Licensing Requirements page.
General Information
Free Estimates
Yes
Eco-Friendly Accreditations
No
Payment Options
Check, Visa, MasterCard, American Express, Discover
Senior Discount
No
Warranties
Ask for details

Backyard Golf & Games Inc. is currently rated 4.6 overall out of 5.

No, Backyard Golf & Games Inc. does not offer eco-friendly accreditations.

No, Backyard Golf & Games Inc. does not offer a senior discount.

No, Backyard Golf & Games Inc. does not offer warranties.