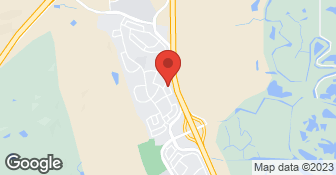 We are a very proud and experienced construction and landscape company. We are always willing to go the extra mile to make sure you the consumer is 100% satisfied with services provided and our team. Billing works as follows 50% due up front and any balance due upon completion, we do accept all major credit cards, paypal, checks and cash....

I messaged the company from within Angies list Message Center but never received any answer. Seems the subscription fee is money wasted.

Description of Work
Nothing!

After our first meeting with Aaron and Caleb we were very impressed not only with their combined areas of experience and knowledge but even more impressed that they discussed a couple of our more difficult projects with enthusiasm for the opportunity to be challenged outside of their more typical job requests. Other contractors flat out did not want to build our retaining wall given our particular requests and/or wanted to default to stone (too expensive) or a wood fence (not sturdy enough.) It was apparent after subsequent meetings as we planned and fine tuned details, and even during our first couple of meetings as they finalized their proposal to us, that they paid careful attention to what we said were our needs, style preferences, and budget limitations. Every step of the way they were receptive to our input and concerns. They also always proceeded with due diligence, repaired anything that was accidentally damaged (a few minor items,) and redid sections of our deck that crew members had done that they had noticed were not perfectly straight or symmetrical. Caleb was the only contractor who suggested a stamped concrete wall which we didn't think possible (stamping a wet,soft,vertical surface,) but Caleb thought it could be done with an experienced concrete/masonry worker handling the job, and he was willing to commit to it. This met our objectives of aesthetics, cost, and the structural integrity to withstand the impact of possibly being hit by the neighbor's cars. The wall exceeded expectations both in terms of appearance and function. It has resolved a number of nuisance issues. We had initially discussed and then contracted with Caleb and Aaron for what we termed deck repair and restoration. Additionally, we were interested in having new benches built for our deck. Well, as a closer and more thorough evaluation of our deck proceeded that first morning, after a couple of hours, Aaron called us over to show us there was more extensive wood rot and water damage than we had initially anticipated. We asked him to randomly pull up some additional boards, and the underside of some of these boards also showed some damage. Conservatively, 50% of the deck was showing some degree of damage/decay. At this point, it was pretty obvious that it simply would not be cost effective to proceed as originally planned, especially considering the deck was 18 years old. Once we decided to have the deck rebuilt, Aaron discussed alternatives with us, and we ultimately chose a synthetic material he recommended called TimberTech. Remarkably, that same morning, gears shifted very smoothly, and Aaron, Caleb, and crew were doing the deck demo and purchasing the TimberTech in our chosen color. Even though we spent more money than we originally intended to, and the deck took more time to rebuild than Aaron and Caleb originally estimated, the final result was well worth the expense and the wait. We love the uniform, clean appearance of our new deck and the beautiful, rich color of both our deck and finally, our pergola! What we think was probably the most fun project, and we're sure Caleb and Aaron would agree, were the deck benches. We gave them a simple, initial design request, and general style to stay within, and the completed benches were awesome! They completed and unified our deck's appearance. They were not built on site, so they were the final item that Aaron delivered and whose appearance was a complete surprise. Even though a surprise to us, it was evident that a great deal of thought and observation of what our garden and yard looked like was taken into account in the bench's final design. We spent several weeks with these guys because of the unexpected deck rebuild and inevitable and quot;extrasand quot; that you usually end up adding with a job of this scope. Every job completed met or exceeded expectations and all matters (financial, materials purchase etc.) were handled in a forthright, honest manner. As a great bonus, we have finally found someone reliable, experienced and knowledgeable for routine yard/lawn maintenance and handyman services.

Description of Work
Rebuilt our deck when it became apparent the rot and water damage was too extensive to simply repair and restore. Designed, built, and stained new benches for our deck. Replaced the posts to our pergola and stained our deck's pergola (which had never been stained because of it's size and numerous slats, other contractors either refused or wanted to charge an exorbitant amount for the job.). Built a stamped concrete retaining wall to address some particular concerns. A variety of other landscape and handyman type projects including fence repairs, indoor/outdoor electrical outlet installation, large shrub removal and landscape clearance, put-together an arbor we ordered and installed it where we wanted it placed.

I called around for weeks for my bathroom remodel estimate. AC's was the first to respond and never tried to sell me on anything more than I had originally wanted. Once the price was agreed on, the guys started immediately. They were finished within a couple of days and left me speechless when I did the final walk through. They went above and beyond and always made my satisfaction their priority. I would highly recommend them to anyone looking to do a remodel.

Description of Work
My dream bathroom

Thank you very much for your review Member, it is always our goal for you the customer to be happy with our work and team. We look forward to assisting you on your next project in the near future.

Green Valley Painting Inc. is a family owned and operated Painting Contractor with 23 full time employees. We have flexible scheduling options to fit the busy lifestyles of the Greater Bay Area.  …

AC's Construction & Landscape is currently rated 4.6 overall out of 5.

No, AC's Construction & Landscape does not offer a senior discount.

No, AC's Construction & Landscape does not offer warranties.