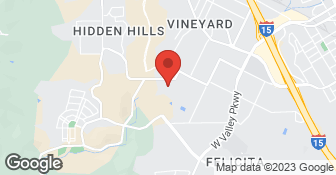 At Oak Island, the customer always comes first! We pride ourselves on our knowledge of not only air conditioning, but heating, air filtration, air purification and zoning, too. We specialize in high efficiency systems for existing homes, and can redesign your air conditioning system to achieve maximum effectiveness with zoning available for balanced comfort throughout the home....

Gene and Gabriel did a great job. They were skilled craftsmen who knew exactly what they were doing. We really appreciated their attention to detail and their quickly and efficiently getting the job done.

Description of Work
Installation of a furnace and an air conditioner.

The installers were on time and very professional. I forgot the name of the main installer but he was very helpful in explaining what they were doing, answering my questions and showing me how to use the new smart thermostat. Chris, the representative that gave me the quote and made the sales came over as the installation was being completed to assure that all went well and I was satisfied with the installation. Over all everyone I spoke with either in person or on the phone were always very personable and helpful I would highly recommend this company

They haven't did the work. They took some time. They came on time.

Description of Work
They gave me a quote for a new system.

Description of Work
Called because central air was not working. Made an appointment - first available was a week out. They came out, said it needed more freon. I asked the man would it be better to just get a new unit. He said he would have the sales department call me that day. I said I was anxious to get everything working because it was my 90-year old mother's house. They never called. It cost $89.00 I believe, just to have them show up. I had made a second appointment for a rental we own. The day of that appointment, they texted and said their worker called in that day, and they had to reschedule. Of course I never called them back. I called Ace Air instead. They came out the SAME DAY (not a week later), and replaced my entire unit the next morning!! Oak Air is a rip off.

I'm sorry that you feel we let you down. I've spoken to our service department about this. They had called you to set up an appointment but you were not there, so they left a message for you and did not hear back. We don't have any record of setting up an appointment time for your rental. I wish you would have spoken to the office before giving us such a bad review. We are a family owned and operated business and we do everything we can to make sure our customers are happy. I'm so sorry you didn't get the message that we called. You did pay $79 for our service tech to come and diagnose that your existing unit needed to be replaced. Once again, I'm sorry for the miscommunication. The last thing we wish to do is turn away any business.
5.0

In 2002 we hired Oak Island to replace our old heating systems completely. At the time we also added air conditioning and all duct work was replaced. We were extremely happy with their professionalism and Lennox HVAC system. 15 years later, we hired them again to replace the air conditioning that still had 5 to 7 years life left. Oak Island has maintained their high standards of excellence and professionalism all these years later. I highly recommend them.

[Member Name Removed], Thank you so much for your kind review. We are so glad you chose us to do more work for you. And when you mention a freak accident, I have to agree. That was the first time I've about a unit being damaged that way. Les Young
5.0

Very well. They were very professional and respectful of my condo and my possessions. Cleaned up after themselves every day (was a 3 day job). I love my new system and have already enjoyed both the heating and air conditioning, which is very efficient.

Description of Work
Needed HVAC system. My condo was not previously air conditioned.

They were really good. They'd included a certain wi fi thermostat, it's basically a Lenox thermostat, on the quote. Then they showed up with, it was still a wi fi , but it wasn't the quality of the Lenox one. So I emailed the owner, I think he's the owner or one of the managers of the business, and he immediately said yeah they should have brought a different one. He actually brought it out from Escondido right away. They set it in during what is vacation time for me. I'm sure they wanted to make sales by end of year but they also accommodated my schedule. They weren't the cheapest. The installers were really professional. The person who was basically the sales person, was extremely. When he came to give me the estimate, I was still mulling them all over and just his professionalism basically signed the contract right then. They did try to come down in price to match another quote I had from another company that dealt Lenox. So ultimately if you included the discount card, which was $520, the prices were pretty similar. They really wanted my business so they were willing to work and include the nicest thermostat they could. It's pretty impressive, you can basically turn off your furnace or change the temperature from your cell phone while you're away from home. It was really nice. They were actually early for the install. Probably didn't make my next neighbor real happy but I shushed the dogs as quickly as possible. There was no trace that they had even installed the thing. They took away the old furnace. They had to do some wood work to support the furnace. Everything was swept up and you couldn't even tell they'd been there.

Description of Work
They installed our furnace.

The installers did a great job. They were careful to get our input on placement of equipment. Very professional. I would recommend Oak Island. We felt the price was fair for the quality of the unit and high standards of the company

Description of Work
We had air conditioning added to existing heating system.

Excellent. Workers dedicated and very professional. Will use again

They did a fabulous job. We would sure use them again.

Description of Work
They put in the air conditioning for us.

COVID-19: With the health and safety of our customers in mind, Same Day Heating & Air is taking extra preventative measures and following Centers for Disease Control and Prevention (CDC) guidelines in the office, traveling and in your home. We are committed to the health and safety of our customers, employees, and all families involved. For in-person consultations and appointments, our team members will forego any customary handshake greeting. They will be wearing gloves and masks. We will continue to wear sanitary booties (as is the standard) and wipe down tables/phones used with sanitary wipes.Always FREE Estimates and Second Opinions on Service Calls!! Welcome to Same Day Heating & Air Conditioning! We are a Family Owned and Operated Residential Heating & Air Conditioning Company. We specialize in partnering with Home Owners to Design and Install the most efficient and comfortable residential heating and cooling systems in San Diego County. We pride ourselves on providing Best in Class Customer Service by not only having our Guarantees and Warranties in writing but also by allowing our employees to love on our clients just like we love on them. This has worked for many years. Our Family at Same Day continue to be the cornerstone of what sets us apart from our competitors. With that we are able to offer you a "100% Right...or 100% Free Guarantee" on any of our services or installations. You have an entire year....365 days to decide if got what you paid for and if for any reason we can not make you happy and satisfied we will provide you with a 100% Refund. Period. We look forward to having the opportunity to meet you and to welcome you into our Family here at Same Day. You wont regret giving us the opportunity to serve you!  …

Commerical & Residential We serve the Temecula Valley area and The Greater San Diego Area all the way to the Border of Mexico. We continually strive to exceed expectations by ensuring that each client receives the very best service. We are licensed, bonded and insured with the state of California. We provide All HVAC needs for heating or cooling your home or office. All of our Employees have over 15 years of experience under their tool belts. Our Warranty is one of the best in the industry. All employees are background and drug tested. We specialize in Mini Splits, Central heating and cooling and duct work.  …

How is OAK ISLAND HEATING AND AIR CONDITIONING overall rated?

OAK ISLAND HEATING AND AIR CONDITIONING is currently rated 4.9 overall out of 5.

What days are OAK ISLAND HEATING AND AIR CONDITIONING open?

No, OAK ISLAND HEATING AND AIR CONDITIONING does not offer free project estimates.

No, OAK ISLAND HEATING AND AIR CONDITIONING does not offer a senior discount.

Are warranties offered by OAK ISLAND HEATING AND AIR CONDITIONING?

What services does OAK ISLAND HEATING AND AIR CONDITIONING offer?