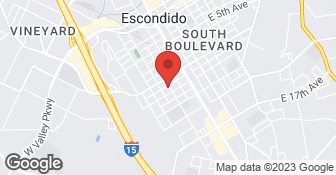 I used Mission Mantels to replace a very worn mantel and tile surround. The work was scheduled and completed on time. Scott Perz has a great eye for detail and offered several suggestions that enhanced the mantel and tile layout. Ben Darby (tile setter) did a terrific job. We couldn't be happier. We researched the necessary work and cost extensively and found Mission Mantels provided the best product for a fair price.

Description of Work
Tear out and replace fireplace mantel and tile surround.

Scott and Ben did a great job and I'm very happy with the result. I was on a tight timeline and he was able to shift some things around to get my fireplaces done before my big event. He came to my house, showed me pictures of his previous work to help me get inspiration, and we talked about what I might want to do. He gave me a quote and we set up all the details right then. I later met him at a stone company where we picked out the stone I wanted. He also brought examples of the kind of materials, shape and stain he would be using to make the actual mantels. This was all very helpful to allow me to see most of the actual materials before if was even really purchased. I didn't have to worry that anything was miscommunicated or would turn out different than I was expecting. Because it was a full-wall stacked stone for one of the fireplaces, the project took about a week. Ben, the tile guy, arrived at around 10 each morning and called me each day to let me know before he was going to get there which was great. He worked until about 4 or 5 and it took 5 days of this to get the hearth and the fireplace built. Scott came on a couple of the days to make sure everything was going smoothly and also to install the actual mantels he was making off site. Everything turned out beautifully in the end and I was very happy with the work. My only caution was that my living room was totally covered in dust and grout particles at the end. Ben did spend time cleaning all the major stuff, but there was just a film over everything in the room. I did know to expect this and a lot of stuff was covered up, so I don't think he did anything wrong, it's just something to expect. The only bad thing was that some of the grout dust did get all over the place and that stuff is actually really hard to clean. So even today I can still see a film on some of the stone and my tile floor around the area. I haven't had a chance to get grout dust cleaner and scrub myself yet, but this is probably something I would have liked to know ahead of time to either know how to clean it better, or just be prepared. All in all, even with my slight complaint, I'm very happy I hired Mission Mantels and I love the end result.

Scott (owner) came to our house to design the perfect mantel for our Living Room, taking into consideration our furniture, house, lighting, life style, etc. He had some excellent suggestions that we had not even thought of. He designed and built a mantel that looks absolutely perfect in our Living Room and although we had high expectations, the final result was even better. His tile person, Ben, did an excellent job on the tile work. Everyone who sees the new fireplace is in awe of how nice it is, and how well it looks in the room (like it was designed and built with the house.) Scott is a very skilled and knowledgeable craftsman and a talented and creative artist. He was very responsive and completed in advance of schedule. This was not an inexpensive project, but was a perfect example of and quot;you get what you pay forand quot;. As you can tell, we are thrilled with our new Mantel/fireplace and highly recommend Mission Mantels.

Description of Work
Mission Mantels designed, built and installed a wood mantel/surround for our fireplace. They also provided and installed travertine tile on top of our old red brick fireplace.

I hope this is the right company as there is some disclaimer above their page saying the phone number may or may not be them... Its not the one I used but everything else matches. I emailed them all my details and measurements, and received a reply the same day. I have to say for not speaking to anyone over the phone except for when paying, this process was seamless and easy. I love my cabinets and the delivery was great too.

Description of Work
built some great cabinets from pictures and measurments I provided from the internet.

We had visited several other craftsmen and chosen Mission Mantels for the superb workmanship, as well as numerous examples we were able to see in person at the Del Mar Home Show, where we met. Scott is extremely professional and responsive, and had many suggestions to help us fine tune what we wanted. Overall the job took about 10 weeks from first meeting in home to installation. His work is expensive, but in line with other craftsmen, and we are very happy with the results.

Description of Work
Painted wood mantel and fireplace surround over travertine that was already in place.

Mission Mantels did updated stuff and they knew what they were doing. They were clean and on time, they did what they said. There were some problems but they were very good at solving them. The workers were good, meticulous, respectful, and clean.

His tile guy was AMAZING and did a PERFECT job. The alder wood mantle that Scott hand made and installed was beyond beautiful. It is apparent he takes exceptional pride in this craftsmanship. Scott came by our house numerous times to ensure we were happy and to provide us samples of stain as well. He was always available by phone, worked exceptionally hard, ensures his tile guy was doing the job we wanted and his mantle was just incredable. I stronglly recommend that anyone looking to upgrade their fireplace gives Mission Mantels a call. I work with a lot of contractors and Scott was one of the very best I've ever had. He even recommended a great company to redue the old ceramic logs, and once again, we were thrilled. Mission Mantels is an exemplary company. We cannot speak highly enough of them and Scott.

Description of Work
Scott showed up and provided us with a quote to demolish our old fireplace, including some drywall and then put a new natural stone tile fireplace in. He expaned the hearth and did everything to the exact dimensions we asked. A natural stone tile that we bought was installed as well and a new wood mantle was put into place. All of this work was done on time and within the originally quoted budget, despiete a few small changes that Scott could have charged us for.

In business since 1985. Fully Licensed Contractors, Bonded, and Insured. Family operated and Certified with the National Fireplace Institute. Members of the National Chimney Sweep Guild, and the National Fire Protection Association. A+ Rated by the BBB.  …

We specialize in CERAMIC TILE SERVICES! We guarantee your satisfaction, and we won’t leave until the job is done right. We pride ourselves on the quality work we provide, while delivering great customer service! Check out all the services we offer below and call -or- click to schedule a free estimate today!  …

Free Design Consultations! We believe in delivering higher quality results than other closet design companies and will provide you with a spacious environment with the ability to breathe, all while tripling your storage space. There is great satisfaction and pride in taking care of our homes and building environment for our families, our friends, and ourselves. Classy Closets provides a variety of options for custom closet doors and shelving to add space and create a style that’s individually tailored to fit your home’s needs. Begin your journey to a new, efficient and beautiful space today by calling for a free design consultation!  …

All statements concerning insurance, licenses, and bonds are informational only, and are self-reported. Since insurance, licenses and bonds can expire and can be cancelled, homeowners should always check such information for themselves.To find more licensing information for your state, visit our Find Licensing Requirements page.
General Information
Free Estimates
Yes
Eco-Friendly Accreditations
Yes
Payment Options
Check
Senior Discount
No
Warranties
Yes

How is Mission Mantels overall rated?

Mission Mantels is currently rated 5 overall out of 5.

What days are Mission Mantels open?

No, Mission Mantels does not offer a senior discount.

Are warranties offered by Mission Mantels?

What services does Mission Mantels offer?