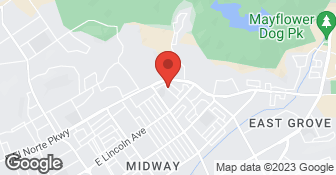 Hernandez Lath and Plastering is a family-owned and operated stucco company. We are based in North San Diego county, serving all San Diego county. We are fully licensed and insured. We only employ professional lathers and plasterers, and a company supervisor is always on-site. Homeowners and general contractors are welcomed....

I hired Hernandez Lath and Plaster to stucco a storage building that I built behind my home. It was a relatively small building, but Ivan and his father performed the work with the same quality as a large house. They covered the exterior walls with two layers of paper and installed metal flashing below the perimeter of the roof to prevent any water intrusion. They used heavy gauge wire lath instead of thin chicken wire, and impregnated the stucco with fiberglass fibers to reduce the chance of hairline cracks. I was very impressed by their work and will hire them again when I need stucco work.

Description of Work
Stucco a storage building behind my home.

First, Ivan is very personable and easy to work with. His price was very competitive with other stucco companies I received bids from. He and his crew were always there when he was needed as a part of my remodel. Even though two of the windows were not installed because the wrong size had been ordered. Ivan agreed to wrap the rest of the exterior and make a second trip back when the correct windows were finally installed. His workmanship throughout the process was impeccable. He did a great job of matching the color of the remaining stucco. We're very proud of the appearance of the exterior of our home thanks to Ivan.

Description of Work
Ivan Hernandez and his crew did a complete lath and stucco of the exterior of my home remodel project, as well as touching up some old color coat in existing landscape pillars.

I called Hernandez for a quote for a new weep screed. He answered the phone and told me that he could come for a quote and take a look at the weep screed on Friday. He was unwilling to give me a time frame for his visit but would call before he came. He didn't show up. I waited all day for him.

He was friendly, competent, responsive, and did a good job.

I found Hernandez Lath and Plastering when I used Servicemaster to find someone to stucco the new garage we were building. We received three quotes, oddly all very different and Hernandez was the lowest, but it was very detailed about what they would be doing and I really liked Ivan, the contact for the company. Hernandez Lath and Plastering is a licensed contractor. Ivan's father has been doing this for years and Ivan acts as the spokesperson for the company. He is very personable and responsive and, in our case, they were very flexible in dealing with continual setbacks that took place during the building phase of the garage. The garage was finished in fall of 2011 and Hernandez completed the stucco at that time. Because I wanted a certain shade of yellow, they created the color from the colors that were available, all of which were either too light or too dark. I really appreciated that they could do that. We told them we would need to replace the stucco on the rest of the house so that it would be all one color, but we had some other work to complete first. It took us a year, but we finally got everything ready to go and just had to replace some windows and got a new quote from Hernandez. Once again, they were responsive and friendly. Once again, we had setbacks and once again, they worked with us and around our schedules and the holidays. My house is finally all yellow and they added weep screeds around the footings of the home and replaced our old, ugly vents to the crawl space under the house. They did a nice job. We had one problem with our cable being disconnected, but when we contacted them, they corrected it immediately. I have really enjoyed working with these guys and will recommend them to anyone who I know needs stucco. They are good people, knowledgeable, hard workers, and take pride in their work.

Description of Work
Hernandez Lath & Plastering installed stucco on an addition and later to the rest of my home, including adding weep screeds, vents, and covering unwanted windows/decor.

Home Remodeling Company. With over 25 years of superior craftsmanship, we offer the trendiest design, best installations, and exceptional service. Together we will design and build your Dream Home. We provide Energy Efficient products and services for Windows, Solar, Roofing and Exterior Paint.  …

I specialize in drywall and plaster repair. if you have dents, cracks, holes or water damage of any kind I'm your guy. I also specialize in popcorn removal and texture matching. I take great care into paying attention to detail and leaving my work area clean and organized!  …

Everyone wants to improve the look of their home and its energy efficiency. While many California residents share these goals, they don't know where to begin to make these goals a reality. Are you looking for a window installation and exterior coating contractor company that is fair, honest and hard-working? What about technicians who are always on time, stand by their word, and have won the "Super Service Award?" In all of these categories, Approved Contractor measures up. Whether you have a specific window in mind (we carry all lines of windows) or simply wish to cut down your energy bills, our window installation services are exceptional. Our texture coating services are sure to leave you loving the look of your house again, will keep the inside of your home cooler, and are able to withstand all kinds of elements. License #952272  …

How is Hernandez Lath and Plastering overall rated?

Hernandez Lath and Plastering is currently rated 4.8 overall out of 5.

What days are Hernandez Lath and Plastering open?

Hernandez Lath and Plastering is open:

What payment options does Hernandez Lath and Plastering provide

No, Hernandez Lath and Plastering does not offer eco-friendly accreditations.

Does Hernandez Lath and Plastering offer a senior discount?

No, Hernandez Lath and Plastering does not offer a senior discount.

Are warranties offered by Hernandez Lath and Plastering?

What services does Hernandez Lath and Plastering offer?

Are there any services Hernandez Lath and Plastering does not offer?