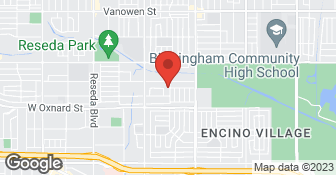 price determine on the job. Free estimate. perfection, and a personal touch. Family owned and operated

Didn't have any work done

Did mot have any work done

Great, very reasonable and finished when they said they would.

The Goldin Pools Team were extremely helpful and patient as we weighed our options as far as what color mini pebble we wanted to go with as well as the type of tile that would not only work with the color of the mini pebble but also the sustainability of the tile. We have a salt water chlorination system that had left salt water deposits on our old tile that was difficult to remove. They recommended glass tile that tends to be easier to clean which helped us narrow down our tile choices. Once the mini pebble and tile choices were made the work began shortly after. The process took less than a weeks time from start to finish. The team was knowledgeable, professional, attentive, and left nothing behind (clean up wise). We are extremely pleased with the results. Thanks to Keren and The Goldin Pools Team!

We purchased a really old house with a big back yard with no pool. W started to shop around for building a pool. Keren from Goldin Pools got my attention really fast cause he aimed right to my main concern which is my kids safety. He designed a Baja pool for us so my kids could stand any where they are with a beautiful Jacuzzi. He also designed and renovated our entire back yard. Me and my husband liked the layout and we move forward with the project, we start building the pool. In 31 days the pool was ready to fill up. We were shocked, in the meantime we started with the concrete and stamp cement around the pool, everything went really fast and Keren even put a temporary fence around the construction area for safety. Now our back yard look like a resort and its ready to use. We are so thankful Goldin Pools.

Description of Work
Build a new pool, renovating back yard.

When we first met with Jake we had already met with some other pool contractors that didn't "get us or what we were trying to accomplish". Jake listened to what we wanted and assured us that he could incorporated our ideas to fit into our backyard. One of our favorite options that the company offered was a 3D rendering of the pool design. We opted for that and were able to see our ideas along with Jake's expertise become a reality. We never thought that everything we wanted could fit so nicely into our backyard. From the moment we broke ground, things were on schedule and according to plan. Crews showed up on time, they were polite and the work was done perfectly. If we weren't happy with something, it was redone without a hassle. Jake's personal attention and customer service is what makes this company different from others. He went with my husband numerous times to look for tile, stone and granite, just to have my husband change his mind again and again. When we couldn't decide one way or the other, Jake helped us see the finished product through his eyes. During the gunite stage, we went on vacation. The gunite had to be kept moist and watered every day. Jake came by himself to water it for us while we were away. That is customer service! I can't say enough about the customer service we received, the crews that work for Goldin Pools and the workmanship. All were amazing!

Met jake through an architect friend. His prices were reasonable. We were given a contract that he stuck to. He did the work well and on time. We wanted some of our own design elements incorporated and he worked with us to make them happen. His work with the permits was truly remarkable. I

Description of Work
Built a pool and did a variety of major grading and concrete work for a large project on our property.

Keren was our representative and we thought he was wonderful during the process. Once it was completed, we had trouble with the finish being rough. They came out and said it was because of the chemical balance in the pool. We had hired his father to do the chemicals. We paid them to drain the pool and fix it. Since then, however, there are tiles popping off, the coping is cracking, there is rust coming through the edges of the coping where they didn't cut the rebar off, and the water feature is crumbling. There is also a leak in one of the pool equipment lines. We have alerted them to all of these repairs. They always text back that when they have time they will get to us. That has been going on for 6 months. Now that they have all their money, they have no interest in fixing any of the work. The pool looks 10 years old, but it's only a year.

Description of Work
They built an in ground pool and spa 20x12 with water feature.

They work started on time, but they continued to be horribly late and sloppy. Examples include leaving a gas pipe uncapped -- when we went to turn the gas on (which they didn't do), we found the leak, has to call another plumber to cap it (since they wouldn't return to the job), and the gas company twice (once to confirm the leak, the second time to turn the gas back on from the street). Job was horribly late (guaranteed 75 days, late by over 2 weeks), they failed the final inspection 3 times (finally got it on the 4th). Pool tiles are broken, the pebble coat scratched tiles they won't replace; and tiles have pebble coat all over them (and they say they cannot clean it off); and tiles are crooked. The stamped concrete is stamped crooked in several placed, and barely stamped in others (and they say they cannot repair); and the concrete is cracking all over. They failed to install the autofill on the pool and now say that they cannot. The spa filter was started with duct tape all over it, and was initially installed backward. They have "fixed" it 3 times, and we have finally called another pool builder to fix it. The heater doesn't work correctly, and we have called another pool builder to fix that. Per the contract, we have withheld the final $7,000 (they have been paid $53,000 and they have refused to fix the defects and complete the contract. They refused to seal the deck, or provide the sealer (which we purchased and did). They refused to clean the job site (my house has gunite spray all over it), and they refused to finish the job or repair the defects.

Description of Work
Were contracted to excavate, build a pool and deck

THEIR WORK WAS EFFICIENT. THEY EVEN CLEANED THE POOL. THEY INFORMED ME AND THEN TESTED IN FRONT OF ME.

Named "Top Masonry & Concrete Company" by Industry Oversight, we are a fourth generation masonry company, specializing in repairs, restorations and new installations of stone, block, brick, concrete and pavers, as well as waterproofing and sealing of any sort. No matter how odd, large or small the project may be, DiBara Masonry can provide exactly what you need, because with DiBara, expert advice is always free and expert service is always delivered. Our Story: Son of a third generation mason, DiBara Masonry's owner, Matthew DiBara, started working with a trowel and mortar beside his father at a young age on the outskirts of Boston, Massachusetts. After deciding to move west and build up his company there, Matt left the cold weather behind but carried with him the knowledge and history of his Italian ancestors and ever since has delivered expert quality sure to make Pasquale proud.  …

GOLDIN POOLS, Inc is currently rated 4 overall out of 5.

No, GOLDIN POOLS, Inc does not offer eco-friendly accreditations.

No, GOLDIN POOLS, Inc does not offer a senior discount.

No, GOLDIN POOLS, Inc does not offer warranties.