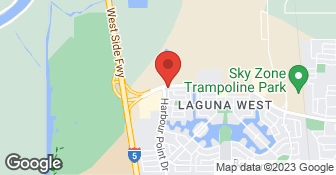 Family owned and operated business based in Elk Grove. We offer fast, friendly, professional service EVERY time. We are proud to use all eco-friendly products. We love our community and are committed to helping it stay safe and clean. We offer discounts to Laguna West residents, Seniors and returning customers. Please contact us for a free on-site estimate....

Cal Pressure LLC is a family owned and operated business providing services to both residential and commercial properties. We Specialize in Pressure Washing, Exterior and Roof Cleaning, Driveways and Concrete, Windows and Solar Panels. We also specialize in sterilization of residential and business exterior including store fronts, and dumpster areas. We pride ourselves on quality work at a fair price. We offer multiple service discounts and will price match or beat comparable services from competitors. Let Cal Pressure LLC go the extra mile for you!  …

We have the experience and dedication to bring your dreams to reality! Specializing in Pressure Washing & Window Cleaning Services, we guarantee your satisfaction, and we won’t leave until the job is done right. We pride ourselves on the quality work we provide, while delivering great customer service! Call or click to schedule a free estimate today!  …

We are a full service provider servicing the Sacramento area as well as surrounding areas. Specialized •pressure washing •driveway/pavement cleaning •solar panel & roof cleaning •gutter cleaning & repair •junk removal I’ve gained most of my experience from working for other companies. I’ve always look at these companies I worked for as the most powerful opportunities, so I constantly asked questions, worked hard, and payed attention to the details of there operations as I was determined to take the knowledge I learned to start my own business. Our customers are met with outstanding service, and exceptional results with every single job completed regardless of the service we are hired for. I may be new to Angi list and currently building up my repor and credit ability, but I can guarantee that my attentiveness to great customer service and the pride I take in my work, you will not regret you decision to have power clean get the job done. ** It takes 50+ good reviews to build a good image and only 1 bad review to take it away  …

Great service .. very professional vendor , explained the process for the cleaning after the job was completed. very reasonably priced will definitely use again

Sam arrived a slight bit later than expected, but this was not an issue as I told him I'd be here all day. He still had plenty of time to complete the full job before the day was over. Understandably, it is sometimes hard to estimate the exact time of arrival. Actually once he arrived, he began work right away and in no time our windows were sparkling clean. He is a very nice, clean cut man, who gives a real professional appearance as he goes about his work. For the B&B it is especially important that any workers are polite and do not race around in a hurried manner, banging equipment around - so we did appreciate his demeanor and care not to make unnecessary mess or damages in the house. Also for our guests, since he needed to be in their private rooms - I'm sure they appreciated that he didn't interfere with their personal items left in the room. None of us were worried that he was going to take anything - his reputation is known in our community. I was especially pleased that he noted damages to our screens (one done by the previous window washers and the other from an outside swing) and offered to repair them for me. As this is my busy time of the year, it was nice to have him alert to ways he could lighten my load. It was nice that he took the time to explain to me some of the issues with our windows and how he would be able to correct them for us - he even gave us a tip as to how to keep the windows sparkling even after he left... I would not hesitate to have him back in our B&B again.

Description of Work
Washed all windows and screens in our B&B both inside and outside.