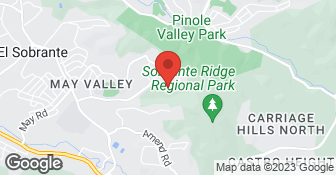 OWNER OPERATED. COST IS DETERMINED BY THE JOB. NO TRAVEL CHARGES. NO SERVICE CHARGES. LICENSE #884910. MAY CONTACT BY EMAIL OR THROUGH THE WEBSITE. WWW.ALIVECONSTRUCTION.COM

Roshan is the nicest guy and generally easy to work with. The front yard work he did was beautiful-- people in the neighborhood were amazed at the turnaround and stopped by all hours of the day and night to offer their compliments. Some of the plants that were installed were a little wilty, but everything else looked marvelous and we believe that work Roshan did in designing and installing the front yard added considerable to the value of our property. We had hired another contractor to gut and reinstall the bathroom fixtures, but they botched much of that job. Roshan helped the other company's workers install the shower system properly (they seemed clueless) and we hired him to clean up the mess that other company made of the grouting and caulking of the tub and tile surround. The interior and exterior painting was spotty. Roshan's crew is a bit sloppy on the prep work-- they didn't evenly sand down all areas to be painted, they didn't tape off all areas where they were painting and there were lots of drips all over-- including on some of the bathroom fixtures. There was a miscommunication with the crew over painting the fireplace (it was supposed to be cleaned and we were going to choose a concrete paint to cover it or leave it be-- but the whole fireplace was painted white, instead!). The crew had to go over the exterior several times-- and in the end it still seemed there were places where primer was showing through. The hardwood floors were sanded down and then restained. The stain was applied unevenly in some areas, but overall, it was a big improvement. We were not happy though, that the refinisher used our toilet and didn't flush (he was the only one at the house during the days of the floor refinishing). The kitchen floor installation went smoothly-- and the floor looks great. I wish I had been there the day they were laying out the floor, because there was some variation in the tile that should have been spread out a bit more so that it would be less obvious. The installation of the kitchen white subway tile backsplash was beautiful, and the upgraded formica countertop looked great too! Roshan had to do some adjustment to make the sink fit in our early 20th Century kitchen cabinetry, but he made it work. Roshan tore down a backporch workshop that had been installed by a previous owner-- outside of the required building codes. We recaptured the backporch space and Roshan replaced some floorboards and stained the deck. The only thing questionable about this work was the choice of stain, or perhaps, lack of sealant. The brown stain showed footprints and dirt immediately. Once our landscaper removed all the years of ivy growth, Roshan and crew installed new fencing along one side of the property and fortified the other side of the front and backyards with latticework fencing. These fences, and a new gate between the front and side yards looked great, and we got lots of compliments, during showings, of this work. The only problem we had with the driveway cement section replacement is that the color didn't match the previous cement work we had along the driveway. It turned out a pepto bismol pink-- and many people viewing the house commented (unfavorably) on this. Overall, Roshan and crew did a good job with our long-neglected property. In the beginning of the project, which ran from first consultation to completion about 3 months, Roshan seemed to get what we wanted and when there were issues he moved quickly to correct them. But, towards the end, Roshan's crew was splitting time on another job, and it seemed like they just wanted to rush through and spend all their time on the other job. This is when the work became much sloppier, and Roshan seemed a bit defensive when we asked for things to be touched up or when the work would be finished. Roshan had to deal with a family emergency during our job-- and we made allowances for that-- but we also had deadlines to meet. The only other thing worth mentioning is that there were people on Roshan's crew who were not English-proficient. Roshan checked in daily with his crew (and often worked alongside them) and we didn't have any problem communicating with him. However, it was difficult to express corrective measures to some of the workers when Roshan wasn't around (we speak a little Spanish-- one of the workers, though, didn't seem to understand much English, at all, and he would be working solo for stretches of the day).

Description of Work
Roshan and crew helped prepare our home for going on the market. They painted the house, interior and exterior. Replaced kitchen floor, and resurfaced kitchen cabinets. Installed a kitchen sink, countertop, and backsplash. Tore down a non-code workshop. Refinished hardwood floors, throughout. Installed considerable plants in front yard, and redwood chips in the front and back yards. Created a walkway with pavers in front yard. Replaced the fencing along one side of the property; installed latticework fencing along another side of the property. Replaced lighting fixtures in several rooms. Replaced a section of cement in the driveway. Replaced hardware on doors and cabinets. Touched up several areas in bathroom that were botched by another contractor-- including sealing grout work in bathroom tub and tile surround.

Description of Work
I used Alive Design & Construction 6 months ago and he replaced windows, kitchen floor, painting and some other work.

Roshan was excellent. He was easy to work with, and very good about presenting options to any issues that came up (all of which he handled superbly). He and him team did a great job installing our floors. He gets major extra credit for going out of his way to assist with the delivery of our floors -- we really appreciated that. Another great plus: he works cleaner than any contractor I've ever seen.

They did a very good job. They finished the work promptly. Based on other work that I've had done recently I would say that their prices are very reasonable. Rosean Habarakada was his name and he did a great job. I would recommend them to others with no hesitation.

They were reasonably priced for the work they did. I thought that the quality of work was satisfactory. They are a smaller company but they did great work so I would recommend them to others.

Description of Work
When we were selling a house we had them come and prepare it. They refinished the flooring for the house and a number of other things.

We specialize in all phases of remodeling for your home, business, bathrooms, kitchens, finishing basements, and more! We guarantee your satisfaction, and we won’t leave until the job is done right. We pride ourselves on the quality work we provide, while delivering great customer service! Call -or- click to schedule a free estimate today!  …

Professional team in Contra Costa handling tough painting tasks since 1990, reasonable & affordable rates. Providing lower rates than the market, Services, and 100% customer satisfaction guarantee. I am a 20+ year painter and so is my crew. We have plenty of experience as journeymen painters and are looking to make your house look beautiful and new again.  …

ALIVE DESIGN & CONSTRUCTION is currently rated 4.8 overall out of 5.

No, ALIVE DESIGN & CONSTRUCTION does not offer a senior discount.

Are there any services ALIVE DESIGN & CONSTRUCTION does not offer?