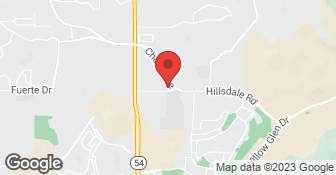 Darby Painting is a family owned small business with over 35 years of experience in the San Diego market. We are licensed, bonded, and fully insured. Our craftsmen are highly skilled & cheerful. Our pledge is to work with you to ensure your satisfaction in beautifying & protecting your home. All work is warranteed. Major credit cards accepted....

Description of Work
Tedd Darby did a terrible job. He never showed up when he said he would, was completely unprofessional, did a poor job and overcharged us. We had to hire someone else to redo the paint job he did. Thankfully the other painting company did a great job, was punctual, and charged us half the price.

Tedd, the owner, was very flexible with respect to scheduling, he communicated well throughout the entire project, and his crew did an excellent job. Furthermore, he stands by his work, and he was more than happy to come back and do some painting at no extra charge when I wasn't happy with the color I had chosen.

Description of Work
He painted certain rooms in my house.

I had the work done about 8 years ago but I've only recently been an Angie's List member. Darby's was the lowest of 3 bids I obtained to paint only the exterior wooden house trim. I had no issues with the administrative end of the deal (estimate, scheduling, etc). My only issue is with quality of workmanship. There was no preparation except for masking off the areas to be painted; no sanding or priming was done. I can't even recall if the trim areas were rinsed off with water prior to. So here I am 8 years later and the paint has been peeling in a few places for the last couple of years. I didn't think I'd be painting the house again so soon.

Description of Work
Painted the wood trim on my house.

This business may have a new phone number now, (619) 250-7488. There was a Darby family member working on the crew named Brandon. This was my highest bid by far.When they came for estimate, offered to power wash mossy areas on shady part of patio slab, as well as roof. He explained they could change out old ozidized door handles/deadbolts, light fixtures and house numbers. He said they would accommodate my work schedule to paint the doors, since the house would have to be unlocked.Sample colors on house included extra colors I didn't ask for, and were placed on shady area of wall, making it hard to tell how they would look in the light.Later when I asked about the power washing, he looked frustrated and a very overweight worker was sent up on roof (300#). I later discovered many broken concrete roof tiles.The patio slab was never power washed.The colors and lighting I selected did look great. The stucco repair by the front door appears to be holding up. There was quite a delay completing the job because he was unable to accommodate my work schedule, so that I could be home to open all the doors for painting.After painting completed, the workers tried to hide the broken roof tiles with drop clothe and said it was for paint touch up. When I heard all the noise and looked out the upstairs window, I saw a different, even heavier worker replacing tiles.I watched the door knobs and deadbolts be replaced, very sloppy, no effort made to ensure they were lined up with door frame. Most of them did not latch at all. Following multiple conversations, he absolutely refused to replace the house numbers. I had to pay someone else to take care of the door knobs and numbers later. My worker checked the roof and found 3 more broken roof tiles, which were eventually replaced by the painter. Even though the paint looks good, I could not recommend this company. I expect integrity and timely follow through for top dollar.

Great! All work was done in an expert manner and his crew left the place spotless - - I would not call anyone else.

Description of Work
I have used Tedd Darby for several jobs over the last five years. The largest of which was to paint the exterior of my home which involved extensive repair to the wood and stucco. Twice he came out in heavy rain to make emergency repairs on my tired old roof. He replaced my patio roof when it blew off in a storm. His last job here was to widen, replace, and paint an exterior door.

I got three bids for exterior painting my 2,400 sq ft home with loft. (two stories high) Darby Painting made the lowest bid with the most amount of detail. They came on time, completed the job within 5 working days and had a large enough crew to make quick work of the job. They repaired dry rot areas, were very thorough and detailed. When we did the final inspection, they corrected any little areas that may have been missed (there weren't any). They cleaned up after themselves each day they were here and posed a minimum of interruption to my day. I would highly recommend this company to anyone.

They are a really honest company. They also do some construction work apart from painting. They are really good. They use legal workers. I have used them for several years now. I got the ceilings redone in two stages. I didn’t get any other estimates because I wanted the job done while I was on vacation. I wanted a company that I could trust. I knew Darby Painting Plus very well and hence I used them. I don’t have anything to worry about when they come out. Their prices were average for a really good painting company. They were very professional and punctual. I had to set a precise date, way in advance, to get the acoustical ceilings done. I chose them because I knew that they would be very punctual.

Description of Work
I use Darby Painting Plus. They have done painting for me and they have done a deck. The last time I used them was for redoing the acoustical ceilings.

King of the Painters Inc

King of the Painters, Inc. is the king of the painting jungle when it comes to interior and exterior projects. We perform both residential and commercial jobs of all sizes. Our services include simple re-painting of interior and exterior walls, basic and finished carpentry services, wall texturing, special wall surface effects (such as "marbelizing" and "faux finishes"), installation of recessed ceiling lights, all the way to drywall and acoustical ceiling repair. We also offer expert application of color glazes, specialty industrial coatings, including industrial enamels, epoxy and urethane coatings. Additional DBA - King Of The Painters. Additional email - info@kingofthepainters.com.  …

We specialize in the expert, custom prep & painting of your home. We also offer wood siding & deck refinishing, carpentry & wood repair, installation of doors & windows, among other services

How is Darby Painting overall rated?

Darby Painting is currently rated 3.9 overall out of 5.

What days are Darby Painting open?

Are warranties offered by Darby Painting?

What services does Darby Painting offer?