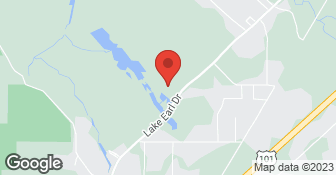 I had them replace the weather facing part of my roof, even though it was only about 5-6 year old. The winds are really bad here and had multiple leaks. Had them glue down every shingle, paid extra. About a year and half later, developed a leak. Was told their warranty is for one year. Now have developed two more major leaks, even though the roof is only about 6-7 years old.

Description of Work
Don't recall the price or any other details.

They had a crew do the work. They were very professional. There wasn't any mess. At the end, they took a metal detector and picked up the nails. They let me pay 1/2 up front and I paid the balance at the completion. I had no complaints at all. They're locally based.

Description of Work
They removed and replaced our roof.

They removed and replaced a roof on my in-laws house and garage. On the house, this also involved replacing about 8 sheets of plywood. They did a very good job and their crew worked well together. The cleanup after the job was also very good.

the work was great, all clean-up was performed, GREAT JOB

Description of Work
they tore off my old roof and replaced a new one. all work was completed in on day. i would deffently use their services again and woild recommend they to everyone.

RED SKY ROOFING is currently rated 4.2 overall out of 5.

No, RED SKY ROOFING does not offer a senior discount.