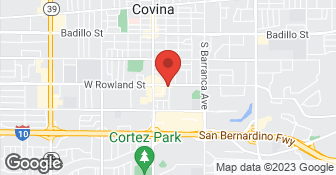 US Home Developers is a construction company providing services in Residential Construction and Remodeling, from tiling to roofing, from grading to painting and working on projects with a variety of scales, we keep on growing a big family of contractors, satisfied clients and partners. We take care of your residential construction projects whether it is home improvement, house full remodeling or residential ground up construction. Estimates for insurance companies are subject to additional costs. We carry an exceptional team of senior level professionals and young enthusiastic talents that accumulate decades of work experience in the construction industry. This multi-cultural and multi-disciplinary team working with you and for you, is the key to success each and every time.  …

We at Royal Turf Landscape and Hardscape specialize in artificial turf installation, pavers, concrete, gravel, DG, Mulch installs and designs for a low maintenance and modern upgrade. I've been in business for years for one main reason: Our customers are treated like family. With family you handle everything with care and attention. We are here to guide you and give you our advice based on your goal and dream. We believe in value. Call us today so we can turn your dreams into reality. 310-699-7650  …

First, I could not get a detailed cost proposal, and had to relentlessly pull numbers out of him to understand what the costs were. In the end, I never fully understood why I paid so much. It seems to me that he takes a very comfortable margin.The pros: Dino has some good people on his team, they work hard for hours on end. They clean up at the end of each day, and leave the site as if no one had been here. That's quite remarkable.The cons: 1. Unexpected delays, most of the time with a good excuse (father in law's emergency hospitalization). 2. Dino miscalculated how many podocarpus I needed, so I ended up re-selling ten of them back to him for much less than what I paid for. And even that was hard to negotiate. 3. Pool equipment move was outsourced to another company. They emptied 1/3 of the pool onto the street and had no hose long enough with them to use that water to hose my property. Dino was aware, but did nothing. After their work was completed, the water in the spa never came back up at a higher level than the pool (unless the pump is at work of course) the way it used to be. I called Dino several times and left voice mails. No response. I called another company, and they moved the check valve higher than where the first team put it. I was told this was a very obvious flaw in their work. This didn't not fix the problem though, so I am still not sure what is going on. One thing for sure, the issue started after the first team's work was completed, and Dino is non responsive.4. Improvisation due to lack of proper planning and oversight. The pool equipment move was done without supervision from Dino or from the designer. As a result, when they were done, there was no way to hide the pool equipment behind the hedge extension. The solution was to cut out some of the cement under the pergola to make the space! This could have been avoided. 5. There are two major leaks of water: one by the pool equipment where the soil is almost constantly damp, and one by the siphon which was placed against the pool house. I called Dino several times and left voice mails, as I was concerned one leak could be coming from the pool equipment. No call back. I had my gardener dig to find out what these leaks were about. The first leak come from the drip line, not sure why this particular hole gives more water. For the second leak, I had my gardener dig a trench away from the pool house wall for now until I figure out what is causing this and how to fix it.I am curious to see my feedback on Angie's list will get Dino's attention since his business was not registered here.

Description of Work
The work was mostly demolition work, planting a new hedge, installing a drip line, moving the pool equipment. Dino G, the owner, is a very pleasant guy, but my experience with him has been disappointing.