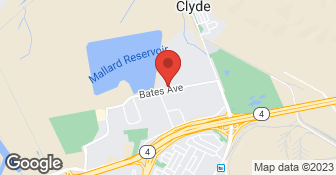 We are full service professional General Construction company. We specialize is outdoor accessory structures. Our services range from decks to pergolas, steel railing and stairs , BBQ's and custom fences. We take pride in our craftsmanship and value our customers. ...

The vendor was on time but was not familiar with the type of fence I wanted. We discussed and he said an estimate would arrive shortly. I never received an estimate nor did anyone followup with me to see if I was interested. I check my spam folder - I find it disappointing that Angies List has contractors who don't follow through as it makes me suspicious of any of the business listed.

Description of Work
Everything went fine. My rear fence had been replaced twice before in the past 28 years. This one should last a long, long time because they did it right. The above price was split 50/50 between me and my rear neighbor. The crew finished the fence in one day. The fence was on the crest of a portion of my rear, upslope yard to my neighbor's yard, which was level. J.P. Slocumb, the boss, explained to me why the fence failed in the first place--the concrete top level that supported the 4 x 4 posts was below dirt level, so when it rained, the water puddled at the base of the 4 x 4 post and eventually the water weakened the ground and the fence, as a whole, started leaning to my neighbor's side and most of the 4 x 4 posts snapped at the concrete line. The tops of the new concrete are now well above ground level and this fence should now last a long, long time. They were on time and went to work right away. My new fence looks beautiful!

The price was something I could afford, and more reasonable than two other companies I got estimates from. Most companies do not want to come out for smaller repairs, which they have to charge more per foot than when they do larger jobs. The owner and general manager are very personable. The laborers arrived on time and completed the work in one day. It is satisfactory for the price. I think the general manager should have noticed on his original visit that the boards they would have to match were 6 inch instead of 8 inch, and had them to begin with in order to match the rest of the fence. They had to make a trip to home depot to get the 6 inch, and then cut off the ends that were notched. Un-notched 6 inch boards are available. They were not prepared with the window frame rails either, and I had to tell them they could buy them at Home Depot. They thought they would have to cut them. Also, be advised that the bottom 2 x 12 support boards, and the posts, are treated a very dark brown. I did not order the more expensive heart redwood, which, of course, would look better. They did not replace the corner post, which I had requested, but I did not see this until after they had left. However, they did replace two other posts that were not in the original plan, which I appreciated. The foreman did not complete the trim repairs to one panel of the fence and I had to tell him to do so and on both sides. I think there should be better communication between the general manager and the foreman as to what is expected. They did break 5 drip line sprayers and stomped down one small plant. I think they could have been more careful in that regard. The owner said they would show me a board with samples of gate latches that I could pick from. However, they did not have a display board and gave me the only one they had, very basic, which I will probably replace. I did not find out if they removed all the old cement. They did not dig it out, but chipped it and I do not know how far the new posts are cemented in. They should be 18 inches. They do not use wet mix cement, but dry cement that is put in the holes and water added to it. Ask a lot of questions folks and always be home to check on the work frequently.

Description of Work
Repaired and replaced sections of fencing.

They provided timely communications, showed up on time, and performed the work in a professional manner. Both my neighbor and I were happy with the outcome.

Scott is professional and they deliver what they promise at a good price. I will definitely use them again.

It was a great experience overall. My neighbors did all of the arranging and had me look over the terms. Scott's team was punctual and got the work done quickly and cleanly. In fact, after the work was done, I was tempted to have my other fence replaced because the new fence was so lovely (but I haven't done anything about that yet). The price I listed here was the total price, which was split between me and my neighbors.

Description of Work
The fence I share with my neighbors was falling down in the back, and we had Scott and his team replace it. The fence being replaced was approximately 110 feet long. The new redwood fence was installed over two days (one day for demolition of the old fence and installing the new posts, and one day for installing the boards and rails).

We specialize in home and property improvement or development. From Retaining walls, to Resurfacing Decks and outdoor surfaces. We aim to Develop the best home and property you envision, through detail oriented work based in quality. Together my brother and I (Lord Brothers) have experience since 2017 in the construction and landscape trades. We look forward to working with you.  …

AMM Fencing is a highly-rated outdoor construction company serving the Tri-Valley area, as one of its largest providers of residential redwood fencing. Our company offers competitive pricing and an easy process, from start to install. We provide each customer with a personalized estimate, and a high-quality installation process that fits your schedule. This has earned us the esteemed title of Diamond Certification #2084, with 98% of our customers stating that they would continue to use AMM Fencing for any additional projects. All of our Redwood is premium grade, locally sourced and naturally resistant to insects, decay, and warping! Our provided services are extensive, including Redwood Fencing & Gates, Pressure Treated Retaining Walls, Wrought Iron Fencing & Gates, Wired Fencing & Gates, Decks, Arbors, and Trellises. We are a locally owned, operated, and licensed fencing contractor committed to servicing East Bay communities like Pleasanton, Livermore, Dublin, San Ramon, Danville, Diablo, Blackhawk, Alamo, Moraga, Orinda, Lafayette, Walnut Creek, Pleasant Hill, Clayton, Concord, Martinez, Castro Valley, Hayward, San Lorenzo, and San Leandro. Estimates are free, and provided Monday - Friday from 10am-3pm. No deposit is required and payments are made easy with our online billing system. We also accept all major credit cards, checks, and cash! Each homeowner that contacts AMM, can be sure that they are in dependable hands. C13-Fencing License Number #969043  …

Palm Construction will send one of our 3D Design Experts to your home for an introductory session that includes your projects’ scope of work, specs, and dimension, followed by walk-through of different showrooms and material suppliers, getting you one step closer to your desired vision. Your project will be performed by our top professional crew members.  …

We generally do no take on masonry or electrical projects. While many of our projects are similar to landscaping we usually do not install landscaping or provide landscaping maintenance.

How is SG Construction overall rated?

SG Construction is currently rated 4.5 overall out of 5.

What days are SG Construction open?

No, SG Construction does not offer a senior discount.

Are warranties offered by SG Construction?

No, SG Construction does not offer warranties.

What services does SG Construction offer?

SG Construction offers the following services: We specialize in all types of exterior wood working projects. We install all types of wood fencing ranging from privacy and security to decorative and artistic. We also install many different styles of decking from wood , to composite and everything in between. We also install all types of wood projects. We are a general contracting company so we also perform many other related project in association with our specialties.

Are there any services SG Construction does not offer?

We generally do no take on masonry or electrical projects. While many of our projects are similar to landscaping we usually do not install landscaping or provide landscaping maintenance.