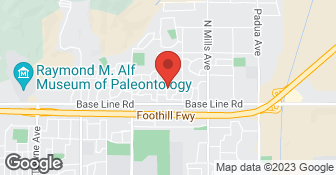 A-1 General Contracting is a family business located in Claremont, California. We can take care of your small needs, such as installing a new ceiling fan or your big projects, like adding a room to your home, creating a new kitchen or bathroom, or building your new home from the ground up. Every client is unique and we will be happy to assist you in any way that we can

Everything they do is perfect. He is excellent and always figures out the best way to do things with no shortcuts. I would highly recommend him. I've used him six times in the last two years while remodeling.

Description of Work
They did electrical work. They moved a switch and I had him put in a plug. They also installed some recessed lighting.

See above detail of the services performed.

Description of Work
I had the company come out to give me a quote for a garage extension with an additional side room and removing & making some walls for my hall bath. The first appointment was rescheduled by the company, but they did show up on time for the reschedule. Both guys were friendly and knowledgeable. They listened to what I wanted to have quoted, made some suggestions and told me I would receive a quote by email. I received the quote about a week later via email. Because of the amounts quoted, my husband is going to do the work himself; he is able, but doesn't have a lot of spare time. The amounts were too expensive for our budget.

When we had an old deck removed, we discovered substantial dry rot in the bottoms of five large redwood posts that support part of an arbor that covers most of our brick patio. When were looking for someone to repair the arbor, Pete Pruitt of A-1 General Contracting was recommended to us by two people who work with general contractors. Pete came out to look the situation over the very day I phoned and came up with two options for repair. After we selected one, he gave us a written estimate and an approximate date for the work. As it turned out, he had an earlier opening and was able to make the repair within a week. He and a helper installed a temporary scaffold to support that portion of the arbor, cut the rotten bottoms off the posts, formed molds for and poured concrete pedestals for the posts, and anchored the posts to the new pedestals. After the concrete set, they removed the molds and scaffold and told us how long we should let the concrete cure before completing the surrounding brick work. The new pedestals and anchors will ensure that the bottoms of the post are not exposed to dirt or water and should prevent the problem from recurring. Pete and his helper cleaned up completely when they were finished and were unfailingly professional and courteous. We felt the price was very fair. We intend to use A-1 General contracting again for other projects.

Description of Work
Repaired large redwood support posts for an arbor by removing portions with dry rot and installing new concrete pedestals for the posts.

Bonded
Insured
All statements concerning insurance, licenses, and bonds are informational only, and are self-reported. Since insurance, licenses and bonds can expire and can be cancelled, homeowners should always check such information for themselves.To find more licensing information for your state, visit our Find Licensing Requirements page.
General Information
Free Estimates
No
Eco-Friendly Accreditations
No
Payment Options
Check
Warranties
No

We'd like the opportunity to assist you in all your home needs. Most of our work takes place in Claremont and the surrounding areas. While our primary work is residential, we also work in the industrial/commercial industry.

How is A 1 GENERAL CONTRACTING overall rated?

A 1 GENERAL CONTRACTING is currently rated 5 overall out of 5.

What days are A 1 GENERAL CONTRACTING open?

A 1 GENERAL CONTRACTING is open:

What payment options does A 1 GENERAL CONTRACTING provide

A 1 GENERAL CONTRACTING accepts the following forms of payment: Check

No, A 1 GENERAL CONTRACTING does not offer free project estimates.

No, A 1 GENERAL CONTRACTING does not offer eco-friendly accreditations.

Are warranties offered by A 1 GENERAL CONTRACTING?

No, A 1 GENERAL CONTRACTING does not offer warranties.

What services does A 1 GENERAL CONTRACTING offer?

A 1 GENERAL CONTRACTING offers the following services: We'd like the opportunity to assist you in all your home needs. Most of our work takes place in Claremont and the surrounding areas. While our primary work is residential, we also work in the industrial/commercial industry.