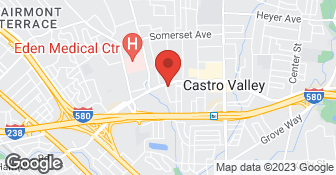 A great job on a complicated mid-sized ($100,000 range) bath renovation project. I will hire them again. The project was to gut and completely renovate/rebuild two full baths as well as make cosmetic improvements to two additional baths. This involved relocating walls, floors, electrical and plumbing in addition to extensive finish carpentry and tile work. I have a large single-family house in the Castro neighborhood of San Francisco that was built in 1885 and substantially expanded, modified and renovated over the years. Although the house is in good shape, it is old – floors and walls are not plumb, general construction, plumbing, electrical and seismic standards are from years long past and access to many work areas is difficult. All of this made the project far more complex than a bath renovation in a house built in the last several decades might be. The scope of the work involved: demolition of bathrooms (including walls, floors and ceilings), roof and exterior wall water damage repairs, seismic upgrades, rough and finish plumbing, rough and finish electrical, extensive Rough and finish carpentry (walls, floors, doors, moldings, etc.), extensive tiling, hardwood floor installation, bathroom fixture installation, painting as well as the city permit and inspection process. Golden Gate handled all of these. The project took about 4 ½ months with a constant crew of two or three guys as well as specialty sub-contractors coming in from time to time. Although the time frame seemed long, in hindsight I cannot see how it could have moved dramatically faster. Paul (the business owner), Steve (the on-site project manager) and his crew were all reliable, honest and very easy to work with. The gut renovation of two of the bathrooms (80% of the project) was based on a fairly detailed drawing/plan. Once the demolition occurred and the underlying structure was understood, the original plan had to be modified to reflect these conditions. Steve was very good at understanding both my functional and esthetic visions of the finished space and coming up with sound ways of achieving them. When I compare the initial plans to the finished result, they are remarkably close (no easy feat in a 130-year-old house). Working with Paul to understand and agree upon the cost of these and other changes made to the plan along the way was quite straight forward. It was easy to work with these guys. I lived in the house while the work was going on. The crew always showed up when they said they would. They were respectful and careful with my property and were reasonably clean. The one isolated mishap (some wallpaper damage) was replaced at Golden Gates expense without argument. Pros - Great finished result - Fair price - Easy to work with - Reliable, responsible and professional - Good communication - Creative problem solvers - Managed city permit process very well Cons - Not as familiar with San Francisco inspection process as they could be - Small organization so there is not a lot of backup Getting contractors to do mid-sized renovations in San Francisco is not easy. I spoke with seven contractors. Five declined to even consider the project because it was too small (under $250,000). Of the two that bid on the project, Golden Gate was less than 70% of the higher bid. This is the third time I have done a significant renovation project (twice in New York City and once in San Francisco). Golden Gate was the fairest and easiest contractor to work with. The project certainly had its frustrations but they were largely with the renovation process and not the renovator. My bathrooms are structurally sound and plumb, they look great, and function perfectly. Every “problem” encountered was resolved reasonably and in a reasonable time frame. And, I feel as though I paid a fair price. Golden Gate Enterprises has a robust website. It will give you a very accurate sense of Paul Gordon and what to expect from their work (especially the You-Tube videos.

Working with Paul, Steve, Felipe and Franco was an awesome experience. Exceptional talent and dedication to work and craftsmanship. Finding a good contractor is always stressful, and therefore lies many unknowns. Paul and Steve took us under their wings and guided us with what our final vision was--The finished project was exceptional, and we are very happy!! My wife and I got really lucky with Golden Gate Enterprises.

Description of Work
Everything was great until I have asked for references and not a word for months and then he sends me an email asking me when he can start work. The nerve!! I have already hired some one else.

Hi [Member Name Removed] you have us confused with someone else..we do not do exterior house painting. 3 years ago you had asked for a rough estimate on the following Clearly this is not a job we would call up and say can we start needs a contract, plans, engineering etc. Would appreciate if you could please your comments .
5.0

We selected Golden Gate to work on renovating the balcony of a newly purchased apartment. The owner Paul came out and explained how the project should be done correctly, so that it not only meet all safety requirements but also last for a long time to come. Paul also explained the process clearly as well as the uncertainty associated with it. His crew are also very professional and worked on the project expeditiously. Paul also acted as a general contractor at time to coordinate with other renovation projects that was going on around the same time and provided timely advice on how they should be done correctly to prevent future problems. We ran into a few surprises along the way and the final cost of the project did end up to be a lot more than what we expected. Summary of my review is that Golden Gate is an expert in balcony repair but that is a cost associated with that level of experience and expertise and the peace of mind that comes with it. We would hire Golden Gate for this type of work again.

Long process but worth it in the end.

Paul Gordon, with his workers Sal Rodriguez and painter Joseph Lopez, performed outstanding work to address major dry rot and termite damage to two exterior walls and to structural members in the crawl space. Most importantly, they spent time to determine the root cause and address with a long term solution. Due to various factors, some of which were out of their control, the project took longer than expected. Despite the delay, the project cost remained in control, and the quality was flawless.

Welcome! We don't brag around about quality, because we let our quality talk for us. Call us for an FREE estimate. 1-888-610-1762 Or email: jargueta@diamondpavers.com Information we need from you is: Name and address: Best number and time to call: Project information:  …

GOLDEN GATE ENTERPRISES is currently rated 4.9 overall out of 5.

No, GOLDEN GATE ENTERPRISES does not offer a senior discount.