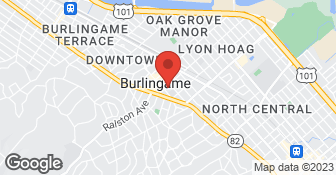 Discount Plumbing & Heating, Inc., has been in business for twenty (20) years. We have proudly served the San Francisco Bay Area with every aspect of plumbing needs for either repairs or new construction....

If you need service after hours or on Sunday, please call 415-845-9199 directly for plumbing service. San Francisco Plumbers Welcome to Atlas Plumbing & Rooter, we are top-of-the-line plumbers providing both residential and commercial plumbing services. We understand that plumbing problems are often unexpected, so we are on call 24 hours, 7 days a week to assist in a wide range of plumbing emergencies. Committed to quality service and customer satisfaction, our dedicated team of professionals look forward to assist you - You'll be glad that you chose Atlas Plumbing & Rooter.  …

A 2 Z Bay Plumbing & Rooter is a family owned and operated company, a trade tradition passed down by generations. Our Core Principals that set us a side from the bunch are Honesty, Fairness and Reliability, we are committed to provide the best value for every job performed. We use only the highest quality material that are certified to insure the longevity of the end results. Our Plumbers are experienced to take on all your plumbing projects in a quick, clean and respectful way. We specialize in all aspects of Residencial and Commercial Plumbing Sytems: Drains Cleaning and Repair, Sewer Line, Water heaters, Gas lines, Copper Repipes, Pex piping, New Construction, Remodedel, Design, Construction, Sewer Video Inspection, Pipe Surveying and Location, Slob Leak Loction and Rerouting.  …

Faucets leaked at base. Apparently sealant or gasket was not installed Called several times to repair but no response.

It was a tough job, but they managed and were professional throughout. They used booties and cleaned up after themselves.

Carlos came promptly, assessed the situation quickly, provided all the options and gave recommendations. When I selected a replacement, he offered to purchase and return to install. He came back in about an hour and everything is all installed and working!

Calm and expertise was my experience with Carlos and Discount Plumbing Rooter service.

Description of Work
Carlos was great from the beginning. He was calm at a time I was freaking out about a sewer main line that backed-up. He quickly Gas Jet the line and then instinctively determined the problem could be on the city side. He dispatched the city and they came out and found 7 tennis balls clogging the lines on the city side of the pipes. Again, it was Carlos' calm and knowledge that put me at ease.

I had a confirmed appointment today with a 1-3pm arrival time. At 3:15, I called for an update as no one had yet arrived. Told that I was next, I continued waiting patiently. At 4:45, with still no one having arrived, I called back and was told no one would be coming today. Asked what is the value of their committed 1-3pm time slot. I was told and quot;that nothing could be done for meand quot; and if I still wanted service, it would be another day. I suggest that you look elsewhere for plumbing service. This company cares not at all about customers or their commitment to service. They don't seem to mind taking my appointment and then tying me up all day waiting for what turns out to be a bust. If you value your time and need a plumber you can trust - DO NOT CALL this company.

Description of Work
No work performed.

They responded fast but they need a little bit more expertise. They actually put plumbers tape and plumbers pipe on a gas stove and you're not allowed to do that so it was leaking. I will use them again but with caution.

Description of Work
We used the plumbing service of Discount Plumbing.

The plumber that came out was Angelo. He said he didn't have the proper screwdriver to tighten the faucet. He said he would return between 8 and 9 the next morning that it would be $80. No one showed up. I called to check on if anyone was coming and talked someone who said that they'd send out a tech who would be there between 9 and 10 - no one showed. Then they said between 10 and 11. Finally, at 11:30 a plumber arrived. He had very limited English skills. He worked on in it for about 45 minutes but said he couldn't fix it because he didn't know how to use the screw driver. He gave me a bill for $575 for parts and labor - which includes a fuel surcharge which they didn't tell me about. It also says they gave me all types of discounts! I refused the bill because he didn't fix anything. He said he tried. The man that I talked to about the bill said there was nothing he could do. Two days later, Angelo, called at 7a.m. - on a Sunday! - saying that he was on his way out to fix my faucet. Ridiculous! Since then, another plumber from a different place came out and tightened the faucet within two minutes with a screwdriver and didn't charge me at all. When a plumber makes a house call he should have the proper screw drivers. They should've told me it would take a couple days to get someone qualified out instead of sending someone unqualified. The bill is entirely unjustified and ridiculous! They have a right to charge a fuel surcharge but they need to notify any customer ahead of time as well!

Description of Work
They were to fix a kitchen faucet that was leaking because of a loose screw.

Overrall i am extremely satisfield with the work performance that Jason did at my resident . I would recommed this company to anyone .

Description of Work
Went on their new website http://www.discountplumbingrooterinc.com/. Call them and explained my problem Was at my house in less then an hr Discount Plumbing who came in (3rd in line) and SAVED THE DAY!!! These guys: 1) Know what they're doing 2) Have the equipment 3) Are reasonably priced (w/solid original estimate) 4) Professional, friendly & very nice :-) 5) Get the job done, when other's can't 6) Get the job done FAST 7) Take care of all permits, inspections, and more!!! 8) Deliver quality service & plumbing Check out their Better Business Bureau rating too, if you don't believe me... Jason W. (Field Supervisor) GREAT customer experience :-) Call these guys first, like I wish I had... I sure won't be calling or recommending anyone else from this point on. Experience Details: My toilets wouldn't flush. Jason resolved my problem iin less then an hour . what a releif .

I'll try to summarize quickly: * Called this company for the services above.* Plumber visited and gave quote of $349 for toilet install, $120 for other misc. work. I said yes. (By the way, I was also given a quote of $2495 for a replacement 50gallon hot water tank, which I later did for $1300 with a diff't company. $2495 seems double what it should be.)* Anyway, back to the work performed:* Toilet bowl installed, but plumber asked me to help him drag old toilet bowl in a box up stairwell. At the end, I realized it was leaking the whole time and I'd just had the stairwell carpeted. Gross! I can't think what it was dripping! Anyway, this job was done and the toilet works.* The sink work, though, was a nightmare. He said he needed a new lever strap (which is odd - as the existing one was new). * He went shopping for parts for 2.5hrs. * He returned and said the sink lever was fixed. I pulled it up as a test and it came right out of the sink. Glad I tested it first!* He fixed it, but it was still sitting 1inch too high. He adjusted unsuccessfully and seemed in a hurry. * Eventually I paid and he just left and said I should txt him to fix it the next day. I asked about the 12% angies list discount. He said he knew nothing about it but would ask the office the next day.* He also said he'd call the next day to come back and fix the problem. He didn't.* I called the company next day to report on the problem; no one called me back.* I called the original plumber; he said I'd get a refund of 12% on labor and $40 for the extra parts I didn't need. I asked for someone from the company to call me with info on the refund money (i.e. how much). He said sure.* No one ever called me, my money was never refunded, so I got over-charged for services not received and a discount promised on this site was not honored. This might be a good company with good people. I just personally had a bad experience. I'm a first time home buyer and I moved in about two months ago and this experience left me feeling taken advantage of. Bummer!

Description of Work
I needed an old toilet bowl removed and a new toilet bowl installed. There was nothing mechanically wrong with the old one - I just wanted a new one. I also needed two smaller services provided, including adjustment on a pop-up drain on a sink. I am a first time home buyer and this was my first place.

Discount Plumbing & Heating, Inc., has been in business for twenty (20) years. We have proudly served the San Francisco Bay Area with every aspect of plumbing needs for either repairs or new construction. We provide service repairs for all housing drain problems, faucet replacements, water heater repairs, etc.

We perform ALL plumbing repairs and replacements!