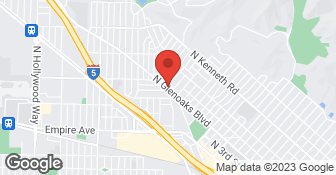 Our Business is located in Burbank, where it was established since 1989. Diagnostic costs for In-Home service within 15 miles radius is $45.00 & varies thereafter. In-Store diagnostics cost $15.00.

Absolutely HORRIBLE. One of the worst companies we have ever worked with. They have been lying to us for over 3 weeks now about fixing our 1 year old fridge that broke. I understand if someone doesnt have a fix for something and they just tell me they cannot do it. But to lie and give us the runaround and prevent us from using our freezer for 3 weeks is beyond frustrating. They have no customer service whatsoever. They will put the blame on you and make you the bad guy for not being able to fix your product. I was really hoping not to resort to this and hate leaving 1 star reviews and effecting peoples business, but in this case, Artin Electronics should close down. One of the worst interactions with any company ever.

I called and was quoted $85 for an in-home estimate. The person came 10 minutes early (I was not home yet) but was very nice about waiting. The fridge was cold, but not refrigerator cold that day. He took stuff off the shelves, took some pictures then said I'd probably need to replace the condenser. The freezer worked just find so I asked if he wanted roll the fridge away from the wall and look at the fan and the condenser (which seemed to be running fine). He looked at me with an odd expression, like "why would we do that?". I asked him if they'd be able to replace the cracked water line so the ice machine would work again and he took a picture of the ice machine, saying they could replace it. I told him the ice unit was fine and that only the water hose needed to be replace. As I spoke he packed his stuff up and said he had to look for replacement parts on the internet back at the office and that he'd let me know. As his truck pulled away I looked at the clock. He'd been in my house 12 minutes. Two days later I got a call that he couldn't find any parts on the internet. $85 for 12 minutes of picture taking and misdiagnosis. BTW, after he left I cleaned the coils and replaced the tubing - totally fixed the refrigerator myself.

Description of Work
My refrigerator was not staying cold on particularly hot days, even though the freezer was working well.

They came promptly, were on time, personable, knowledgeable, efficient.. We have made them our go-to appliance repair folks. Extremely glad to have found them!

Description of Work
Front gasket replacement on an LG washer at our home, and later a freezer repair in a rental apartment refrigerator.

Razmic is the owner. He came on time and is professional and most important... honest! I've used him a couple of times before because I have an older refrigerator that has had its share of issues. On the most recent visit, he fixed the problem and then recommended a double filter because the water didn't taste right with the new filter I'd installed. Because he didn't have the parts necessary, he left and went to two different suppliers until he found a compatible product. Came back within the hour and installed it quickly. On a previous visit where my refrigerator completely stopped cooling, he was honest enough to tell me the refrigerator was fine and only needed a deep cleaning of the mechanical panel. He vacuumed and cleaned the panel under the refrigerator and only charged me a nominal fee for the house call. He could have told me anything was wrong, but instead he spent 40 minutes vacuuming the lower panel and saved me money. Even his in-home service charge was a bargain because when I called Sears to get a repair estimate (I have a Kenmore), the service call alone was twice as much as Razmic charged. He's honest, hardworking and I will definitely recommend him and use his services again.

It went wonderful. They were prompt, had a fair price, expert repairs, and pleasant and friendly staff.

Description of Work
I had a complete overhaul done on my LG washing machine.

He is a very special service provider. He is very friendly and has excellent expertise. Everything that was done was done well. He gave me great suggestions to prevent problems from happening in the future. He was extremely efficient and professional.

Description of Work
He overhauled an LG washing machine and did a major repair on a dryer.

We make your convenience our main goal as we ensure that your appliances are performing at their best. Trinity Appliance Services is oriented on your complete satisfaction with the final result of our work. We only use Original Parts with our Repairs. We are here to help you! We are an essential business which is on duty 24/7 365 days a year. We wear face masks, gloves and special uniform during Pandemic Covid-19 for your safety.  …

California Republic Appliance Repair is a company founded by experienced appliance repair technicians. Our service center strives to provide courteous and professional customer assistance. Our well trained and knowledgeable technicians stay updated on new appliance and manufacturer developments. We have been working in your area with appliance brands like : Electrolux, Frigidaire, Whirlpool, KitchenAid, Maytag, Jenn-Air, Samsung, Viking, SubZero, General Electric, Fisher Paykel and LG. In addition to quality repair services, we'll be glad to help you with seasonal maintenance of your air conditioning system and other products. You can trust that we have the best prices and always back up our job with warranted parts. Along with our emergency response, most service calls can be scheduled within 8-16 hours. We generally provide a two hour window for your appointment whether its in the Am or Pm.  …

Founded January 2017. Please call our office today and get your schedule for your appliance repair. +1 818-818-8204 With Angi Since August 2022. AML Appliance Service is a company founded by an experienced appliance repair technician. Our technicians are certified by DCA and ETA 608 Type l, with over six years of experience as appliance repair technicians. Our service center is providing professional customer assistance. Our well-trained and knowledgeable technicians stay updated on new appliance and manufacturer developments. We have been working in the LA County area with appliance brands like Electrolux, Frigidaire, Whirlpool, KitchenAid, Maytag, Jenn-Air, Samsung, Viking, SubZero, General Electric, Fisher Paykel, LG, BOSCH, and Thermador. Also, we are officially authorized by Samsung (SAMSUNG AUTHORIZED SERVICE CENTER (ASC)).In addition to quality repair services, AML SERVICE is glad to help you with the maintenance and repair of all category appliances. AML Service has the best prices and always backs up our job with warranted parts. Along with our emergency response, most service calls can be scheduled within 4-12 hours. We generally provide a two-hour window for your appointment whether it's in the Am or Pm. We do not repair commercial appliances. Customer satisfaction is our priority.  …

Artin Electronics & Appliances is currently rated 3.8 overall out of 5.

No, Artin Electronics & Appliances does not offer free project estimates.

No, Artin Electronics & Appliances does not offer eco-friendly accreditations.

No, Artin Electronics & Appliances does not offer a senior discount.