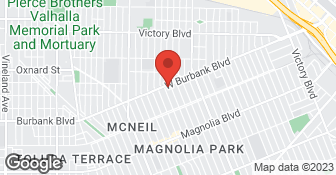 We have been in business over 30 years. We offer service City Wide 24 hours a day - 7 days a week with no travel charge. We are licensed and fully insured and bonded. IF YOU ARE NOT HAPPY - THE SERVICE IS FREE!!

Smell started Sat night and we called Action One on Sunday morning since they are located nearby. We were quoted a 2 hr wait. We waited about 5. We were grateful to have someone come out on a Sunday but they didn't even try to solve the problem. They said they would be back the next day (Monday) at 10am. They quoted $250 to snake the pipes. They said there would be an "extra charge" because they would have to go up onto the roof (of an one story house). They never showed on Monday. They never called. My husband called repeatedly and each time he was told they would "be there in 30 or 40 minutes." Once again, they NEVER called us to say they would be late. We doubt they would have showed up at all. We finally gave up and thank god we did. We found another plumber (JPM Plumbing and Rooter in Burbank) who came out immediately and thoroughly snaked the pipes for $50. Turns out there is absolutely no reason to change an "extra fee" for going up on the roof. They were trying to rip us off. We are first time homeowners, learning as we go, and we lucked out this time. Thanks to Action One's total lack of professionalism we found someone better (and honest) to do the job. And the smell is gone!

Description of Work
Foul (septic) smell coming from laundry room at back of house. Needed cause determined and problem solved.

You must have us confused with another company. First off - we will NEVER go up on the roof to clear a stoppage through the vent. Our liability insurance carrier will not allow us to. You can damage the roof or break the vent. Then, we called JPM Plumbing and spoke to Al. He said he never did this job for you. He charges $125 minimum to clear a main line stoppage. Drop the bottle - quit drinking! This is a ridiculous accusation! You must have your plumbing company names mixed up.
2.0

I looked in the yellow pages and noticed a big ad for Action One Plumbing, and they stated they have After Hours Emergency Response. I phoned at about 10pm, Steve answered, and told him I needed an angle stop valve replaced, and was trying to get my management/security to shut the water. He told me the estimate was $165 plus parts to replace the angle stop valve after hours. The water was shut off, so I phoned him back and asked him to come. His worker arrived an hour and a half later. After 30 minutes of work, most of it going back and forth from the vehicle to get parts and tools, I was given a bill for $590 dollars by Steve's worker. After pleading, I got the bill down, but felt victimized in the whole process. I complained to Steve on the phone as to why the bill came out to $590, and why the part they sell at home depot for about 6 to 10 bucks is actually $425 dollars after hours. I was told to get the money from my homeowners association, and what should I expect since it was after hours. I explained my HOA is not responsible for anything inside!! I told Steve that if he was upfront with his pricing, I could have shopped around for another company in the yellow pages, or waited for my friend who is a licensed contractor in the morning by putting a pot under the leak. Just to compare, licensed plumbers usually charge between $89 to $99 dollars an hour for repairs during the day, so I felt $165 was fair, but this was not the price he stated at the end of the job! I feel Action One Plumbing has DISHONEST pricing for after hours emergency service, so please beware if you need them for an emergency after hours!!! My Response to Company's Response bellow: More dishonesty from ACTION ONE PLUMBING!! After my security guards shut off water to my unit, only then did I call you back and asked you to come. These were YOUR(Steve's) instructions. Your employees had NO PART in turning off water in the building. Your guys, yes 2 of them, were only there for a total of 30 MINUTES, NOT 3 HOURS. The second guy watched, and didn't really participate. And for your info, water is NOT shut off to the whole building. There are only a few units affected when water is shut off.

Description of Work
After hours Emergency repair service for an Angle Stop Valve leak. Quarter turn Angle Stop Valve handle broke off under a sink when I turned it and was dripping some water. Placed a pot underneath. Repairman arrived an hour and half later and replaced valve. Total time was about 30 minutes for the repair.

We are so sorry you feel you had a bad experience. We strive to maintain 100% customer satisfaction. We responded to your emergency call at 11:00 p.m. and the plumbers finished the job at 2:00 a.m. You live in a high rise condominium and we had to get approval to turn water off to the entire building. We had to make sure there were no leaks anywhere in the building when we were done with your unit. There were 2 men there for a total of 3 hours work and you were charged $375.00 for this after hours, emergency service call.
5.0

I've been using Action One for 4 years now. I recommend them to anyone I know that has a plumbing issue. They respond fast, figure out what's wrong, give you a price, and then complete the work as promised. The owner is honest and looks to figure out how he can fix the problem without having to charge you for a BIG fix. I know if he says it's gonna be a big fix, that he's worked out all the other options.

Thank you so much for taking time to write this review. Our main goal is 100% customer satisfaction!

Father & Son Sewer Inspections offers over 40 years experience in complete sewer and drain solutions: repair, replace and rehabilitate any existing sewer and drain. We pride ourselves on keeping up with the latest technology and equipment to offer solutions to any challenges your home may have. Please call the office the office today to schedule an appointment at (818) 612-2219.  …

The Water Heater Company provides reliable and high-quality plumbing services to customers in Los Angeles, Ventura, and Santa Barbara Counties. Our team is proud of working for more than 20 years in the plumbing industry. We offer upfront pricing, transparent processes, and open communication so customers understand what is happening during every step of their plumbing job. We are known for providing excellent customer service to homeowners. The team at The Water Heater Company is experienced, trained, licensed, and are available to handle your plumbing emergencies 24/7. Our knowledgeable technicians provide customers with affordable water heater and plumbing solutions that are timely and high quality. Our specialists stand behind the work completed with a customer satisfaction guarantee. Call in the experts at The Water Heater Company today for help with your home water heater and plumbing problems.  …

How is Action One Plumbing overall rated?

Action One Plumbing is currently rated 3.3 overall out of 5.

What days are Action One Plumbing open?

Action One Plumbing is open:

What payment options does Action One Plumbing provide

No, Action One Plumbing does not offer free project estimates.

Does Action One Plumbing offer a senior discount?

No, Action One Plumbing does not offer a senior discount.

Are warranties offered by Action One Plumbing?

No, Action One Plumbing does not offer warranties.

What services does Action One Plumbing offer?