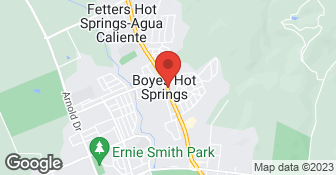 From annoying dripping faucets to emergency pipe and boiler repairs, Apes Plumbing Heating AC and Sewer Services in California and surrounding areas, is your go-to heating and plumbing contractor. Our certified, licensed plumbers have the training and the tools to handle the job, residential or commercial. Some of our specialties include; New Plumbing Installation, Piping and Re-piping, Heating Unit Installation, Water Heater Installation, Duct Work, and Boiler Installs to name a few!...

Serviceperson arrived and checked out the system. He said the motor and fan needed replacement and that would run approximately $500 plus labor. He told me that he was very busy, and my call had been popped into his schedule without notice and if I wanted the work done he didn't know when it could be done as he was scheduled out for a good while. My feeling was that he was not interested in the work.

Description of Work
Air Conditioner Out

Showed up to fix my heater right on time. Very quickly fixed my heater and we're friendly and helpful!

They didn't do anything, and spent only 15 or 20 minutes there. He struggled to get the thing off the wall even and didn't do anything. I called the person who set up the appointment after and he said he would call me back, and he still hasn't. I was charged $168 dollars for the service and I couldn't believe it.

we where called out to perform A service on her Furness. We spent 40 minutes they're not 15 minutes to clean the filter replaced it with a new one and did the service on it and then check the batteries and showed her how to use your thermostat. When we gave her the bill she said She didn't have any funds for that. I can't believe someone would call is out the performers service honor furnace and expect not to pay. If we didn't do the service we wind of charged her. It looked like she had no intentions of pain to begin with and we did the service for her. I will devilie be putting her on the do not service list call someone else for your free services.
5.0

I've used them many times. It was an excellent service.

Description of Work
They did plumbing repair. Replaced copper plumbing. They did some cleaning and snaking out to unclog the drain.

DOUBLE TEAMED, JACKED UP HOURS, UNPROFESSIONAL, NEVER PREPARED. WATCH OUT. A little background: In November of 2011, the pipe to the downstairs toilet, in the wall between the bathroom and the garage leaked. The water broke through the garage wall and flooded the garage. Bryan, the owner, came out and had to drain the hot water heater so he could move it and get to the wall to make the repair. The charge was $391.88 for the entire job, which he did alone. In November of 2012, the job I am reviewing now, the pipe going to the hot water heater, in that same wall, leaked and had to be replaced. Bryan sent out a guy named Steve, who insisted it was a two-man job. I tried to tell him about the repair Bryan had made to the pipe maybe 6" away, in that same wall, all by himself, but Steve was belligerent and aggressive and insisted it was a two-man job. DOUBLE TEAMED. I wasn't happy, but I thought, two men, maybe they'll get done in half the time. Wrong. Every time I went out to look, the two of them were standing there chatting, not even pretending to work. Then they needed a part, which they BOTH had to go to town to pick up -- and let me say that every single time I've used APES, they haven't had what they needed to do the job and had to "go to town" for it, on my dime. Like copper pipe when I called them to replace/repair the copper piping under the house, or the wax gasket for the toilet tank when that's what they were there to repair. In other words, NEVER PREPARED. Steve and his buddy didn't drain the hot water heater this time, just "muscled it around," breaking the little stand it was up on to facilitate regular draining. No apology, no replacement offered. UNPROFESSIONAL. The second guy was shall we say, compromised? He was bouncing around, couldn't stand still, kept shaking his hands around, and his eyes looked like they would pop out of his head. Not what you want to see in someone coming to work on your home. UNPROFESSIONAL. So, I've got these two guys, who can't do anything alone, are spending the customer's (my) cash chatting, and only one of them actually did any work. When Steve made out the invoice, he billed more hours than they were actually there, for two men, at $120/hour EACH. One man job, not done in any kind of a professional manner, and cheated on the hours worked. JACKED UP HOURS. And they threw their debris from the job -- bits of pipe, rusty saw blade, broken plaster, pieces of wood with nails in it -- in the driveway in front of my garage. EXTREMELY UNPROFESSIONAL. Essentially the same job Bryan did a year prior, but almost 5 TIMES the cost. I did call Bryan, the owner, and tell him what happened, but he just said, "Well, Steve said..." So after several years of using APES for all my plumbing issues, paid at the time of service by the way, he wasn't even willing to discuss it. BOTTOM LINE: If my floor were under water from a leak, and I couldn't get any other plumber out here, I would drill holes in the floor to drain the water and have the floor replaced before I'd call APES again. It would probably be less expensive.

They were prompt and showed up on time, but did not have time to do all the work I needed. They cleaned out my bathroom sink drain, but it has still.

They were awesome. They had to come in the middle of the night (1a.m) and were there within 20 minutes. We have used have in the past and will again in the future.

Description of Work
Toilet was backing up in my bathtub.