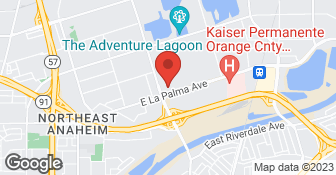 At Mr Gutter we offer all of Orange County terrific gutter services and have established ourselves as among the most trusted gutter professionals in the area. We pride ourselves on our prompt, efficient service and commitment to customer satisfaction. Our job isn’t finished until your gutters are looking good and working perfectly. All Mr Gutter technicians are hand picked for their experience and professionalism. We offer free estimates on every job and always stand behind our quotes. We will never tack on any hidden fees or extras! Big or small, cleaning or installation, you can count on Mr Gutter to provide quality service that one-ups the competition. Give us a call and we'll come out to your house or business for a free estimate and explain the benefits of installing color matched custom seamless rain gutters that will prevent water damage to your foundation and eliminate that annoying downpour over your front door or patio. We offer lifetime warranty on labor and material. We offer highest quality product by using the best American made material, stuffed with knowledgeable industry experts and commitment to excellence at a very competitive rate....

We would prefer a call or text for the fastest service. Thank you!!! **Please call and text Pat at 323.314.7837 if you're interested in service. He answers all inquiries very quickly.** Specializing in all aspects of rain gutters and rain gutter maintenance, Bresnahan Rain Gutter Cleaning has valuable experience dealing with common rain gutter problems, such as unwanted water drips, standing water, water that overshoots the gutters, gutters that pull loose from the roof and debris trapped in gutters. We offer a wide range of gutter services, such as aluminum gutter installation, custom gutter installation, gutter cleaning, gutter maintenance and gutter repair and top-notch Commercial rain gutter cleaning. We also provide window washing and window cleaning services. Additional website: http://www.rainguttercleaninglagunabeach.com. For fastest scheduling please call or text Pat at (323) 314-7837.  …

With 9 years of professional guttering experience, we are here to meet all the guttering service needs you may have.  …

Our firm was founded in 1970 and we have successfully completed over 600,000 installations. We currently do work for Military Builders, Large Residential Developers, Custom Home Builders and Homeowners. The management team that guides this enterprise has over 200 years experience in the contracting field. Our success is based on our understanding the particular needs of each customer. We specialize in personalized and reliable service for any size job. If you wish to be spoiled with great service from caring professionals, now is your chance. Enlist the services of the professionals at L I METAL SYSTEMS today!  …

I believe it was Matt who came here to service our rain gutters, but it's been long overdue. He was responsive and professional. We had our gutters installed (incorrectly in some areas) by the previous owner and they were about to fall after the previous heavy rain. Matt was very kind to come here and fix gutters that were installed incorrectly. Great customer service and friendly! Thanks Matt!

Great. Made suggestions which improved the performance compared to old gutters.I was glad I hired them.

Everything went according to plan and it took about 6.5 hrs to install on my two-story home. Matt was the supervisor of a 2-person crew. Both were well-experienced for the job and knew what they were doing. They made to customize some things to work around some existing conditions but they made it work. The next week we had a small rain and the gutters and downspout all worked fine.

Description of Work
Mr. Gutter removed existing gutters and replaced with new seamless aluminum and connected to rain barrels that I purchased elsewhere.

His workers were excellent! They were quick and did a good job. I used them twice for my house and my daughter's house. He's very nice.

Responded to initial phone call in timely manner. Installed rain gutters as quoted on initial visit. Michael answered all questions and seemed very knowledgeable about his product and different options available. On day of installation crew arrived as scheduled, and worked quickly and efficiently. Lead walked job to review plans and recommended minor adjustments to location of downspouts. All staff were very pleasant to work with. Work site was left clean upon completion.

Everything went beautifully. Michael and his crew are very friendly and professional. Michael showed up on time for the estimate and gave good suggestions for the placement of my rain barrels. The crew arrived bright and early for installation, which took about two hours. I highly recommend their services.

Description of Work
Rain gutters were installed around my house and the front of my garage.

Outstanding. The quote was less than we expected. The Owner came out to review the job before the work start date. The team showed up when they said they would for the install. The owner was on site for majority of the day of installation. The four workers were all employees, not subcontractors. Fast, courteous,and they took the old rusty gutters with them. The lead walked through the work with me at the completion of job and final bill was exactly what we agreed in advance. I strongly recommend this company. This is the way all contractors should be.

Description of Work
Replace old gutters and install new gutters on horizontal deck scuppers for my 4plex. I.e. lots of gutters. Old gutters were 4" rusted steel and majority of work was on second story.

It worked out just fine and was a good service. The cost was fine. It was a while ago. I don't remember exactly what it was, but it was pretty much what was agreed to. They are actually apparently kind of overloaded with business because when I called them for some follow up service they said they were not even entertaining any additional service for at least a few weeks. I guess they are either understaffed or they are just popular. They do have some very strong reviews. The pricing was appropriate for the market. The quality was fine. They were a little big slow.

Description of Work
I used Mr Gutter to move a downspout and connect a couple of other downspouts.

I called Mike at the end of September, knowing that El Niño was coming. He was already super busy, but was able to get Charlie out to do an estimate within a week. Charlie was super friendly and knew his stuff. He was open to talking about ideas I had, but also had considered opinions that he shared with me. He drew up an estimate later that day, and sent it over along with proof of insurance, license, and several other documents. Very professional! I called three other companies, and got two more estimates. At first I thought Mr. Gutter was the most expensive, but then when I asked detailed questions of the others, it turns out that he was right in line with the other providers. Even better, they worked hard to get my job done quickly! After I signed the agreement, they installed within two weeks! The day of the appointment the team called to let me know they were on their way. The arrived promptly and walked around the property with me to confirm what needed to be done. They worked quickly and efficiently, and were done in a little more than 2 hours. The results are fantastic! The color match is perfect, and they cleaned up after them selves. I was very happy with Mr. Gutter, and would call them again in the future or recommend them to others!

Description of Work
Installed gutters on 5 roof lines of a 2 story house.

They were very punctual and professional. They were good about accommodating some last minute changes to the job. Matt and his crew did great work.