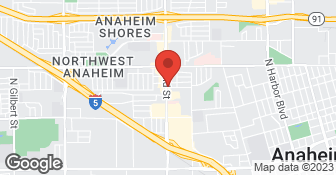 They did a good job. I would use them again.

Description of Work
They provided new cushions for my sofa and love seat.

Called Anaheim Foam to get a person to bring out samples. Said he would be out Tuesday between 2:00-3:00 PM. Did not show up. Called that day, told me he put it down on wrong day. I said OK we scheduled Wednesday in the AM. Did not show again, I called him about 3 PM; said he was just getting ready to call me. He gave me another excuse why he could not make it. If he had a problem he should have called me instead of waiting for me to call. Iold him I would try and find someone else.

Description of Work
Was going to have him reupholster my dinette chairs.

THEY ARE A VERY BUSY SHOP AND TIDINESS IS NOT THEIR FORTE. BUT THE LEVEL OF PROFESSIONALISM IN THEIR COMMUNICATION AND UPHOLSTERY SKILL MORE THAN MAKES UP FOR A SHOP THAT IS A BIT CHAOTIC.

Description of Work
HAD 5 DINING ROOM CHAIRS REUPHOLSTERED. THEY PICKED UP AND DELIVERED THE CHAIRS AND HELPED US PICK OUT FABRIC.

Family owned upholstery shop with expertise in drapery, fabric, & woodwork for more than 30 years with a higher standard of quality. We also specialize in furniture repair & antique restoration. We are passionate about accommodating the client above all else. Call today & take advantage of our complementary delivery service!  …

How is ANAHEIM FOAM AND FABRIC overall rated?

ANAHEIM FOAM AND FABRIC is currently rated 4.6 overall out of 5.

No, ANAHEIM FOAM AND FABRIC does not offer eco-friendly accreditations.