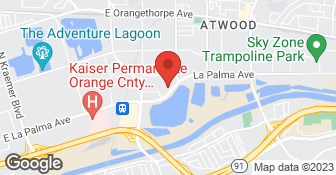 Description of Work
they arrived on time looked the place over brought in the cleanup equipment and was done in less than an hour. He called me out to inspect and when i was done he left saying if you find something i missed call and i will come back and do it. he was very polite and professional. I would recommend to anyone and YES i would certainly use them again.

My garage door was sticking and would not close, it would go down just past the top of the opening and then go back up. I had to pull the release and close it manually. After spraying some lubricant on the rollers and rails and trying to open and close it again several times, it worked OK. But this has happened two different times now, and I didn't want it to happen to my wife, because I know she wouldn't be able to close the door. I saw Affordable Quality Garage Doors on Angie's List and called them since they are close. I called Monday morning and scheduled the service for Tuesday morning between 7 and 9. I was quoted $125 for basic service, not including any extra parts or repairs. John Pascarella came Tuesday morning at 7:30, checked the door and equipment. He recommended replacing a broken hinge and replacing the bracket on the door with a larger, stronger one, and said that otherwise the door and opener appeared to be in good condition and just needed to be serviced. I agreed to his recommendations and he did the repairs and the service, which included lubrication, resetting the eye beam sensors, and setting the motor at a lower operating level which is much less noisy. John was very professional, thorough, and knowledgable and I appreciated his explanation of the situation. The total bill was $165 which I thought was a fair price for his service.

We ended up going with another company because Quality Garage Doors didn't have the glass in the windows I wanted to match our front doors. The quoted price was good and the owner seemed like a good guy. I would definitely get a quote from them if you are shopping for garage doors.

Description of Work
I received an in person estimate for a new garage door and opener. We have a standard garage opening. The owner of Affordable Quality Garage Doors provided the quote. He is a nice guy, was knowledgeable and easy to talk to.

My original appointment was rescheduled by the company representative. The representative never showed up for the appointment and I had to call them the following day to have the person finally come out for an estimate. The estimate I received was based on the specific model number I was interested in. I later called and was told that the incorrect price was given, even though the model number was correct, and that the estimate would not be honored.

Description of Work
Estimate for an insulated steel garage door and opener.

Best Garage Door Repair and Service is a full-service garage door repair and maintenance company proudly serving the Southern California community. We are licensed, bonded and insured. We are a family-owned and operated business, so we understand the importance of building customer relationships. Therefore, our highly trained, friendly technicians are always available to answer questions you may have about our services or your garage door in general. We dedicate our time to providing our clients with the highest quality service possible. Therefore, we offer same-day service, prioritizing your garage door needs. We know your time is valuable, so we ensure we get the job done right the first time. Best Garage Door Repair and Service also offers a warranty on all of our work, so you can be confident that we will repair your garage door properly.  …

Here at L&S Garage Door our intention is to provide quality work with honest pricing. We want L&S to thrive on word of mouth, positive feedback, and strong partnerships in the community. L&S Garage Door will always be a company with strong integrity and remarkable customer service.  …

AFFORDABLE QUALITY GARAGE DOORS is currently rated 4.7 overall out of 5.

No, AFFORDABLE QUALITY GARAGE DOORS does not offer eco-friendly accreditations.

No, AFFORDABLE QUALITY GARAGE DOORS does not offer a senior discount.

Are there any services AFFORDABLE QUALITY GARAGE DOORS does not offer?