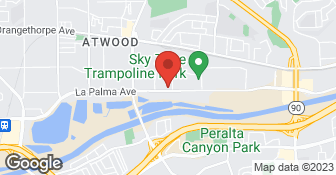 I made the call after reading the reviews. My call was answered promptly, we scheduled a time and date. The locksmith arrived within the agreed upon time window. I explained what we needed and he got right to work. He was polite and professional. He finished the job in a half hour or so. I'm very pleased with the work and the experience.

Description of Work
My son just bought a new to him home in Pico Rivera. We wanted to rekey all outside doors.

They came out and were quick and efficient to get the job done. Thanks!

Description of Work
I needed to have my locks re keyed since there was an issue with a stolen key.

went well, I required no replacement of hardware, and he was able to rekey one door and fix the other one.

Description of Work
I had 2 issues going on, the techinician, Simko, was pretty good, I was helping him get the job done, since, it looked liked it required a second set of hands to expedite the process. He seemed very knowledgeable. I would consider hiring again.

Description of Work
The provider was professional and efficient in the pricing was really reasonable. This was our first Angie's list connection and we were very pleased.

After I was unable to find my spare car key and I was set to go on a road trip with my dog the very next day (it was a Saturday), I called a Mitsubishi dealer who quoted me almost $200 for a new key AND I had to bring it to the dealer and wait for at least an hour or more. I called Academy after I saw them on Angie's List and noticed they were near me. The receptionist took down all of my info and said they could definitely do a key for the ignition (I just wanted one for the door lock) and quoted me about $50 less than my dealer (and they would come to my door). They scheduled me for 4 in the afternoon but asked if they could call me earlier if someone was available. They called me an hour later and Semco showed up. He was professional, very polite and had my new key for me in about 5 minutes. Would definitely use them again and highly recommend.

Description of Work
Made a new key for a Mitsubishi Montero 2006.

BOY DOES IT PAY TO USE ANGIE'S LIST! Second time I have - first with water softeners and now with this! Called several other locksmiths first without using Angie's List, and was told that the lock was ruined since it had no working key - to take it out and throw it away or return it. Then decided to use an Angie's list recommendation and Academy sent Semko who is a lock genius. He said it was only recently that he had determined out how to fix or "doctor" smartkey locks. He did say that usually they are unfixable when the rekeying malfunctions, but it had been a puzzle he wanted to solve. He is a true lock artist who is personable, professional, and really knows his job. The service call was also reasonable - not the vague answers I received from other companies.

Description of Work
I bought a new Baldwin Smartkey lock to add to my existing house locks. Tried to rekey it to existing Baldwin locks and it didn't work (had done it several times before with other locks and no problem). Now I had a lock that didn't work with any key - old or new. Semko from Academy Locksmith fixed the lock.

It went wonderful. They came out the same day I called. The locksmith was very professional, courteous, fast, and did a great job. Gave me additional information in case I needed additional or replacement keys. Would hire them again. A+++++++

Description of Work
I had a curio cabinet that was locked and the keys were lost. He came out, changed the lock, and gave me new keys.

Called on Saturday at 230pm. They offered to come out that day, but I had an appointment. They are available Sundays, and came out the next day at noon. Simcoe was at the house before noon. He offered to remove his shoes before getting to work. He consulted with me regarding the feasibility of changing out additional cylinders throughout the home, but I elected to just re-key the front door. It took him about a half hour and when he was done, the lock functioned better than before. The only reason I gave a B for price is he didn't seem to have a real idea what to charge me. Instead of going off of an itemized invoice (which he did provide a couple minutes later), he worked out some things in his head, punched some numbers into his phone, changed some things, etc. Not unhappy about the price, I just think the initial transparency could have been better. I was happy with the service and would use Academy Locksmith again.

Description of Work
They examined my problem lock, ordered the parts I needed and explained all my questions about this lock and my future plans for locks. Very friendly, helpful and professional. I will use them when I start my house upgrading project.

I called and received a same-day appointment. The serviceman arrived on time. He assessed the problem but could not repair it, which I knew to be true. He helpfully offered suggestions on how I might obtain a new set. He didn't charge me for the service call. I haven't been able to find the exact replacement needed but I definitely would call Academy Locksmith again. If you use this company, check their website for coupons.

Description of Work
The handle set on my front set is broken. It was found that the broken doorknob is unrepairable, but they did not have the handle set I needed so it could not be replaced at that time.

Showed up fast and got the job done. Locksmith was friendly and professional.

Description of Work
Opened one door and rekeyed the lock.

They were efficient and arrived shortly after I phoned them and promptly did the work.

Description of Work
We had a double cylinder dead bolt bathroom door leading outside that we had lost the key to both the handle lock and deadbolt. Academy Locksmith had to get the door open and then rekeyed the locks to the same key as the rest of the outside doors in our home.

They were quick and very efficient and all things considered, they were worth the money spent.

Description of Work
I needed a new computer chip ignition key for my Chrysler.

This company was great! The estimate was the final cost. The locksmith was on time and even a few minutes early. The whole job only took about an hour. I highly recommend them.

The company actually sent a sub contractor out. The gentleman was very nice and helpful. He did arrive a little late which was fine. The job ended up taking a lot longer than expected, and the price was much higher than expected.

Description of Work
Had house rekeyed and garage door lock drilled and replaced. Total of 4 door locks plus garage door.

He was quick and efficient and tested each key while I etched to verify they all worked.

Description of Work
They had to rekey two locks and make multiple keys. There was no additional cost for a Saturday appointment.

I needed a locksmith to make a key. They wanted $169.00 I told them I would call them back. She asked how much where you looking to pay I said AAA wanted $60.00. She said they have AAA discounts. I told her this was allot for a key and she hung the phone up on me. This was very rude I will never do business with this company again or refer it to anyone. .

Description of Work
None was performed.

I just purchased a new home that literally came with a ziploc bag filled with various keys. I elected to change the locks and have a locksmith make one key for each of the locks. I found Academy Locksmith on Angie's List and told them on the phone which made them very pleased. They gave me a one hour window and called 20 minutes into that window to explain they were stuck in traffic and would arrive in 15 minutes. The locksmith arrived, was very friendly, quick about his work and did everything perfectly.

Description of Work
Rekeyed 7 different locks to one key.

After arriving, the nice gentlemen performed a masterly rekey of a lock without an existing key.

Description of Work
Academy Locksmith came to my home unit and repaired a lock that the key was missing to.

HE WAS WONDERFUL, EVERYTHING SEEM TO WORK OUT FINE. THE KEYS ALL SEEMED TO FIT THE LOCKS. I WOULD DEFINITELY USE HIM AGAIN FOR LOCKS. HE'S WONDERFUL.

Description of Work
HE REPLACED LOCKS, ALL OF THEM.

Our goal is to build the mostpositive reputation with out customers. Honesty and Reliability are the two words which we have firmly in our business mind. Residential & Commercial Locksmith Service & Emergency Locksmith Service.  …

How is ACADEMY LOCKSMITH overall rated?

ACADEMY LOCKSMITH is currently rated 4.8 overall out of 5.

What days are ACADEMY LOCKSMITH open?

No, ACADEMY LOCKSMITH does not offer eco-friendly accreditations.

No, ACADEMY LOCKSMITH does not offer a senior discount.

Are warranties offered by ACADEMY LOCKSMITH?

What services does ACADEMY LOCKSMITH offer?